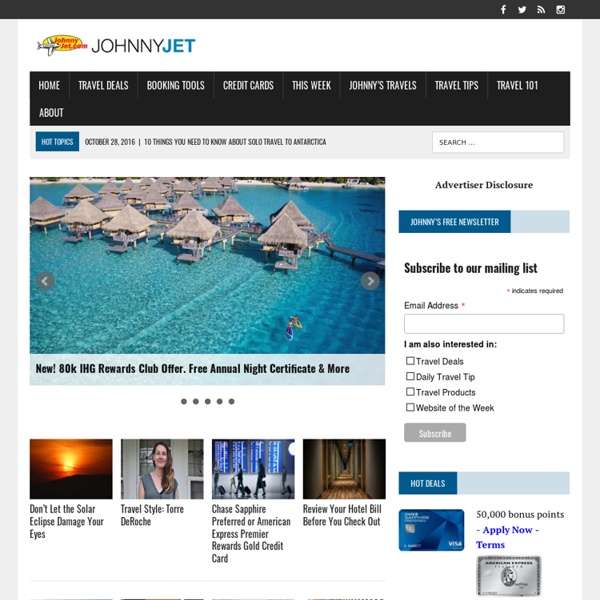 Travel Video of the Day: BASE Jumping from the World’s Tallest Building in Dubai April 24, 2014 By Johnny Jet Leave a Comment There's no amount of money that you could pay me to jump off any building -- let a lone Dubai's Burj Khalifa tower -- the World's Tallest Building. But that was obviously not the case for Soul Flyers World Champions Vince Reffet and Fred Fugen as they broke … Read More Eight Ways to Make Summer 2014 Your Season to Travel April 23, 2014 By Johnny Jet Leave a Comment

Why you should travel young - Converge As I write this, I’m flying. It’s an incredible concept: to be suspended in the air, moving at two hundred miles an hour — while I read a magazine. Amazing, isn’t it? I woke up at three a.m. this morning. Long before the sun rose, thirty people loaded up three conversion vans and drove two hours to the San Juan airport. Our trip was finished. “Because you’re foreign…” Western, White and English privilege in Korea *Note: This post chronicles my own experiences with privilege in Korea as a White, American female. I am NOT speaking for all White people, females, Americans, Westerners or even Koreans. Even Hans, the German office worker, is given special treatment in my Korean textbook–full-body shot, front and center, standing next to Mina, the Korean girl on the bench. I nervously sat among my classmates in a holography class at the Korea National University of Arts in February 2009. A few days earlier, I’d flown to Korea to begin my semester as an exchange student.

Couchsurfing Alternatives Today’s post picks up and expands on some of the resources mentioned in Monday’s article, “How To Burst The Tourist Bubble“. The theory that almost everyone on Earth is connected to anyone else via a small number of acquaintances seems to hold true for backpackers, too. The rapid uptake and access to the world wide web has helped people become better acquainted with their world—and with one another. As the technology has evolved, it has brought ordinary people with common interests together from different parts of the world to make it a smaller place. Backpackers and independet travelers have proved to be quick to adopt new means of communicating and meeting with one another. Almond Roca Recipe Almond Roca I’ve been a busy little candy maker lately, anticipating the desire for holiday gifting. So far, I’ve made truffles, peanut brittle, fudge and this Almond Roca. The almond roca is my favorite. My TOTAL favorite.

El "Rom", el mercado más peligroso del mundo Twitter887 887facebook14.9K 14.9Kpinterest6 6google plus174Share 7 Reasons Why You Should Travel Alone At Least Once In Your Life 1. You will meet amazing people. While traveling with friends or a significant other can be a lot of fun, traveling solo for a certain amount of time can prove to be one of the most rewarding things you’ll ever do because of the great people you’ll meet. When we travel with friends or a partner, we tend to stick to that little group of familiar faces and even though you’ll meet new people, the dynamics and interactions won’t be as deep and fulfilling. While you’re on your own on the road, you’re much more eager to meet travel buddies, team up with other travelers and generally reach out more in order to socialize. 2.

Using Your Scrubba Wash Bag – The Scrubba Wash Bag Instructions 1. Fill - Add water, cleaning liquid and clothes to the Scrubba™ wash bag (20-40% volume) 2. The Truth About Travelers  We have been called many things. Travelers, by default. But we like to be called nomads.