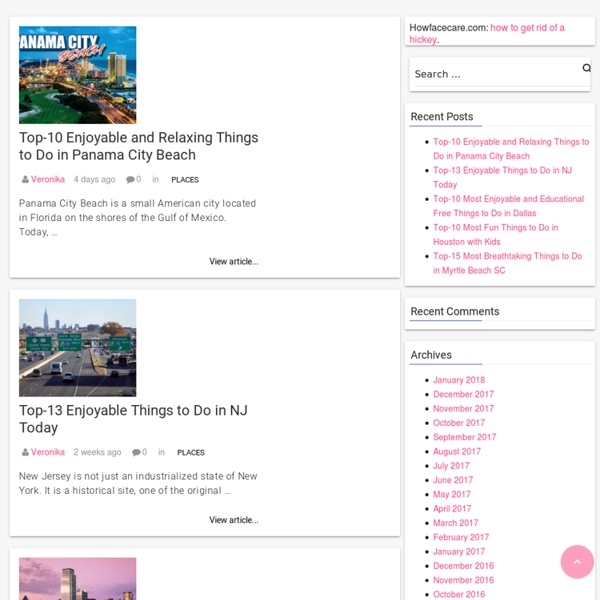 Related:  Around the world • Travel planing

Water Worlds: 15 Real Floating Towns & Ocean Cities There’s only one Venice, but you might be surprised to find that you can get the same scenic and historic feel – complete with canal ‘streets’ and gondoliers – in several other towns across the globe. In fact, there are dozens of picturesque floating villages and islands that are so heavily populated, you can barely tell that there’s land under all the man-made structures. Here are 15 of the world’s most fascinating water-based communities.

Amazing Places To Experience Around The Globe (Part 2) Tian Tan Buddha on Lantau Island, Hong Kong Fernando De Noronha - Brazil Spirit Island, Magligne Lake, Alberta, Canada Rice Field Terraces in Yunnan, China Thailand images photo gallery Tha Ton is a village along the Kok riverside, 24 km north of Amphoe Fang, Chiang Mai. Long-tailed boat with pilot are available for traveling. I was with an italian friend and definitely I keep a good memory of this small Thai village that hosted us one night waiting to get the boat to Chiang Rai. The view from the temple on the hill is amazing, beside the trip along the river Kok was absolutely nice and I do recommend to reach Chiang Rai in this way instead of the usual road from Chiang Mai. Mae Sai is the northernmost district of Chiang Rai Province in northern Thailand.

20+ awesome travel jobs and how to get them 1. Freelance writer / photographer This may mean travel writer, but it doesn’t have to. Collection of Beautiful Lakes A lake is the landscape’s most beautiful and expressive feature. It is earth’s eye; looking into which the beholder measures the depth of his own nature. Who doesn’t believe that God has created images of Paradise here in this world? I believe, if one wishes to get the glimpse of the heavenly glory, then they better start discovering the world and they shall see for themselves. 8 Underrated City Breaks in Europe Heroes' Square, Budapest, Hungary When it comes to city breaks, the usual Euro hotspots like Paris, Rome, Madrid or Berlin, quickly come to mind. But, there are so many more cities to explore in the diverse continent; you just need to search them out. With Easter fast approaching, now is the perfect time to book your city getaway. Here’s our pick of the top eight underrated European cities that you should visit (scroll down for gallery).

Amazing Places To Experience Around The Globe (Part 1) Preachers Rock, Preikestolen, Norway Blue Caves - Zakynthos Island, Greece Skaftafeli - Iceland 7 Great American Road Trips for a Long Weekend We all know someone who has done it – hopped in the car, filled up the tank and took off on an epic road trip of days, weeks, or even months spent cruising the backroads and highways of America. They come back with inspiring tales of small towns, endless vistas, and the joy of the open road. But a trip like that takes time, time that many of us simply don’t have. Those of us who can’t get away to drive the length of the US always feel a twinge of jealousy and longing to feel that freedom. But with a slight adjustment of your mindset, you can enjoy the endless possibilities of a traditional road trip in just a few days.

Dream holiday destinations and inspiration : MYDaily UK If you could go any where in the world, no matter what the budget, where would you go? A swim in the lagoon at the Iceland Airwaves Festival. Photo: Getty Images Amazing Events Around the World Here are the most bizarre/amazing events around the the world that you are missing out on every year by not exploring. This is motivation for you to go out and see what else is out in the world! (I apologize in advance for making your local concerts and street fairs look like petting zoos)

10 Weird and Mysterious Places on Earth digg 1. Mystery Spot Mystery Sport is a tourist attraction near Santa Cruz, California, famous because of its disrespect to the laws of physics and gravity. 25 Boston Activities That Don’t Cost a Penny Savvy travelers are ever on the lookout for bargains. If you are feeling the pinch of a limited vacation budget, know that you can experience a lot of terrific Boston travel experiences for free. Here are just a few ! Take a free guided National Park Service tour of the Freedom Trail (15 State St., Boston , 617-242-5642)( Map) and find out why Paul Revere could not have said, “The British are coming” Watch the sunset from the Harvard Bridge (at Massachusetts Ave.)( Map ) which is really much closer to MIT than Harvard!