Getsongbird.com - getsongbird Resources and Information. This website is for sale! 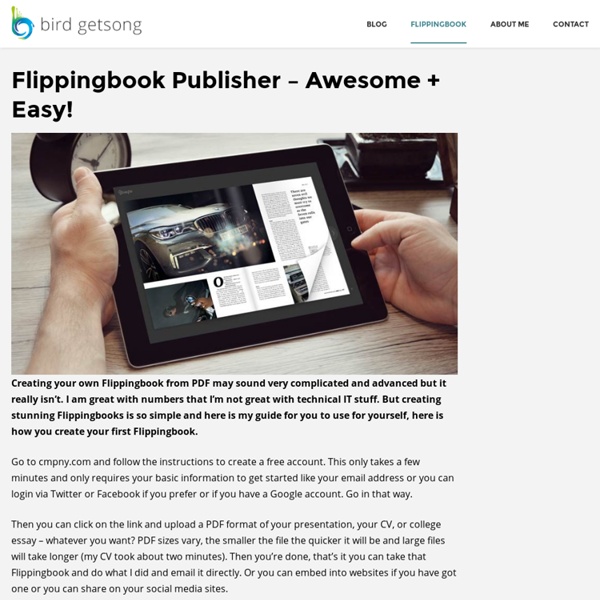 Chrome Google Chrome runs websites and applications with lightning speed. It's free and is installed in seconds For Windows XP, Vista and 7 New! Download MP3s from Streaming Music Sites From Wired How-To Wiki Have you ever been annoyed that services like Muxtape (which is currently unavailable, thanks to the RIAA), Favtape or other playlist-based music sites don't let you download songs? The better sites offer a link to purchase the songs through the iTunes Store or Amazon.com, but the rest just stream the music.

Using Steam's In-Game Browser with WoW Any of you who use Valve's Steam might be interested in using it's in-game browser while playing World of Warcraft. It looks something like this: To use this feature you need to do the following. 1. Install Steam. You can download it for free from www.steampowered.com. 2. Synthtopia free music software Utami, the creators of RokVid and Geisterwelt for Ableton Live, have released Motion – a motion-tracking plugin for Live – as a free download. Continue reading Propellerhead has released Take 2.0, a major update to its free vocal recorder for iPhone. Here’s what’s new in Take 2.0: Continue reading Apex Audio has released a free plugin, for Mac & Windows, Haa5. Haa5 uses stereo delays to create what is known as the “precedence effect”, also known as the “Haas effect” after Helmut Haas, whose 1949 Ph.D. thesis first described this psycho-acoustic phenomenon.

10 of the best budget hotels in New York Posted on: September 21st in Cool Hotels, Travel by Graham Padmore. Like this Post? The Big Apple may be one of the ultimate city break destinations – shopping, art, sightseeing and so much more. It’s also (like most major capital cities) unfortunately notoriously expensive. JamStudio JamStudio for 2021! Download the Windows App or Mac App to keep using JamStudio! DO IT NOW! This app will work after Flash is removed from browsers in 2021! WWOOF - Shop Online The Australian WWOOF Book 2,600 Host properties Only AUD $70.00 On-line Forum Volunteer accident insurance 12 month membership Up-date list on request The Australian WWOOF Book provides details about more than 2,600 host properties throughout Australia. When you buy this book you will receive a 12 month membership of WWOOF Australia, which allows you to visit any Australian WWOOF Hosts, full use of the WWOOF on-line Forum and includes a small volunteer accident insurance plan that covers you while you are WWOOFing on a registered WWOOF Host property. Select the Host you wish to visit from the WWOOF Book or On-line Forum, make contact and arrange a mutually convenient time and period to stay, then turn up, sleeping bag, hat and boots in hand, ready to work!

24 Unusual Beaches You've Never Heard Of Before Do you think that beaches are blasé tourist destinations with nothing unique or interesting to offer? Well, you’re only partly correct. Many of them are over crowded and boring, but none of the beaches we feature here will disappoint. A singing beach, a glowing beach, a beach with rainbow-colored sand — here are the most offbeat seaside destinations you’ll find on Earth. 1. 25 Secret Small Towns in Europe you MUST Visit 1. Cesky Krumlov, Czech Republic There’s no other town in the world that I am more fond of than the quaint, charming, fairytale-like town of Cesky Krumlov in southern Bohemia. It’s as if you have stepped into a time warp – small cobblestone roads, bridges every which way you look, and no, there’s no McDonalds!

20 Wonderful Places You Need To Visit Before They Disappear 01. Olympia, Greece The site of the first ever Olympic Games in 776 BC, the ancient city of Olympia has been inhabited since prehistoric times and is one of Greece’s top archaeological sites. In recent years, hot and dry summers have led to rampant wildfires that have scorched surrounding areas and encroached worryingly close to the ruins. With rising temperatures and lower rainfall in the area, ancient history buffs would be wise to visit sooner rather than later.

26 Real Places That Look Like They’ve Been Taken Out Of Fairy Tales If you love fairy tales and have a serious case of wanderlust, this bucket list was made for you. Travel suggestions via this Quora thread. 1. Taj Mahal, India In The New Seven Wonders Of The World list Taj Mahal, a mosque-mausoleum located in Indian city of Agra, takes a very important place. In spite of its Muslim origin this white marble necropolis became an actual symbol of India. Serious security measures are taken to protect it. There is a special 500-meter security zone established around the complex. Cars are to be parked 2 kilometers away, and the rest of the way tourists have to travel by rickshas, carriages, or electromobiles, because it's believed that car exhaust fumes cause yellowing of the marble facing. There is even a barbed wire fence on the opposite shore of Jamuna River, which runs beside Taj Mahal.

America's 10 Best Cities to Live and Launch A great place to live can also be a great place to start a business. The financial blog 24/7 Wall St. recently ranked the 50 best cities to live. They used Census Bureau data for 550 cities, including statistics on employment growth, educational attainment and housing affordability to determine which cities are at the top of the heap. 12 Of The Weirdest Hotel Rooms You Can Stay In 12. Marmara Antalya, Turkey This is the only rotating hotel in the world, allowing you to experience 360° stunning views. Floating in a pool of 478 tonnes of water and aided by six electric motors, it completes a rotation several times a day.