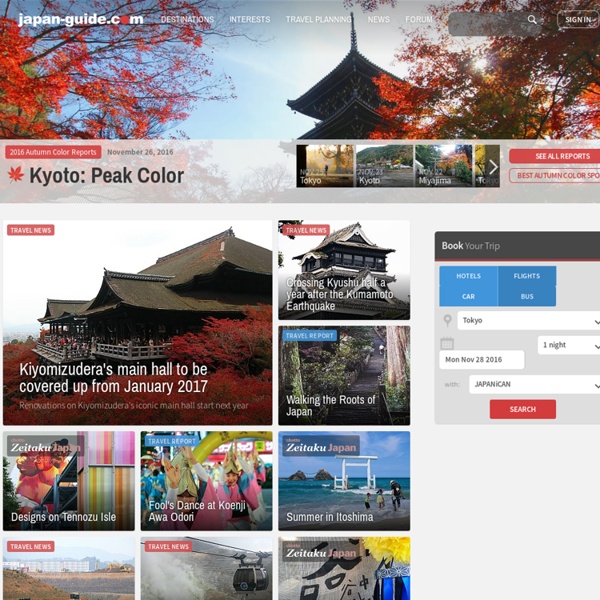 Discount Air Tickets for Japan While regular airfares by conventional airlines remain relatively high on domestic routes, an increasing competition by discount airlines and a wide array of discount offers have made domestic air travel in Japan very attractive and competitive in recent years. In fact, there are so many discount plans, that only very few travelers are ever paying regular fares. Special fares and air passes for foreign visitors JAL (and oneworld) and ANA (and Star Alliance) each offer special fares and air passes for exclusive use by foreign visitors to Japan, which enable holders to fly anywhere within Japan for somewhat over 10,000 yen per flight (also referred to as "sector"). This is a very competitive price on many domestic routes, especially on longer flights, such as flights from Tokyo to Kyushu, Okinawa or Hokkaido. Like the Japan Rail Pass, some of the air passes have to be purchased outside of Japan and before you leave for Japan.

Baths of Kurokawa's enchanted forest Kyushu was until quite recently somewhat overlooked as a tourist destination, a Cinderella to the more obvious attractions of the main island with its celebrated temples, castles and samurai towns. But people are beginning to travel farther afield: enthusiasts come here in search of the Imari and Arita pottery the area is famous for, while the more energetic strike out cross-country hiking, cycling and climbing. True hedonists head for the small villages where rotenburo, open-air, natural hot spring pools bubble from the volcanic earth, drawing visitors from all over Japan and increasingly from abroad. The geology that produces such dramatic beauty of landscape can from time to time show its destructive force, as we saw last year.

Tokyo Damage Report updated April 2013. A downloadable, PRINTER-FRIENDLY (black text on white BG) version of this guide is here: The downloadable guide is ALSO updated April 2013 now we got that out of the way, here is . . . When do the cherry blossoms bloom? When do they bloom? The most important factor in determining the blooming time of cherry trees is the geographical location. Generally, the milder the climate, the earlier the blossoms open. Otagi Nenbutsu-ji - Wikipedia Otagi Nenbutsu-ji (Japanese: 愛宕念仏寺) is a Buddhist temple in the Arashiyama neighborhood of Kyoto, Japan. Otagi Nenbutsu-ji was founded by Empress Shōtoku in the middle of the eighth century. Though was destroyed by the flooding of the Kamo River, it was rebuilt as an offshoot of Enryaku-ji, a nearby temple. In the 13th century, it was again destroyed during a civil war. The temple was moved to its current location in 1922, later suffering typhoon damage in 1950.

Too late for cherry blossoms in Tokyo? - where to see cherry blossoms When Japan's weather services issued their first cherry blossom forecasts back in the cold days of January and February, most of them predicted the season in Tokyo to peak in early April. However, temperatures in March rose far above average in most regions of Japan and especially so in the Tokyo region, taking the weather services by surprise and resulting in a record-breaking early cherry blossom season in the capital this year. Due to the discrepancy between the initial cherry blossom forecasts and the actual blooming dates, many foreign tourists who booked their trips to Tokyo for early April, are now arriving too late for the peak of the season. In order to help such tourists, we created this guide on how to see some cherry blossoms even when most of Tokyo's petals have fallen already. Option 1 - Take a side trip The cherry blossoms in many nearby cities north of Tokyo typically bloom 3-7 days later than those in Tokyo.

Otagi-Nenbutsu-ji temple, Kyoto click 2 x This small temple is at the north-west corner of Sagano district. The attraction of the Tendai-shu sect Buddhist temple is a pack of many stone figures. The 1200 Rakan figures were carved by worshipers of this temple from 1981 to 1991 to pray for the prosperity of the temple. Special Sightseeing Passes This pass makes it convenient to go around Hakone. Purchase this pass from Odakyu Line Shinjuku Station for an even better discount! The Freepass can be used for the following seven types of Hakone area public transportation * Click an item to display detailed information below the map. Fares from principal Odakyu Line stations The above fares are examples only.