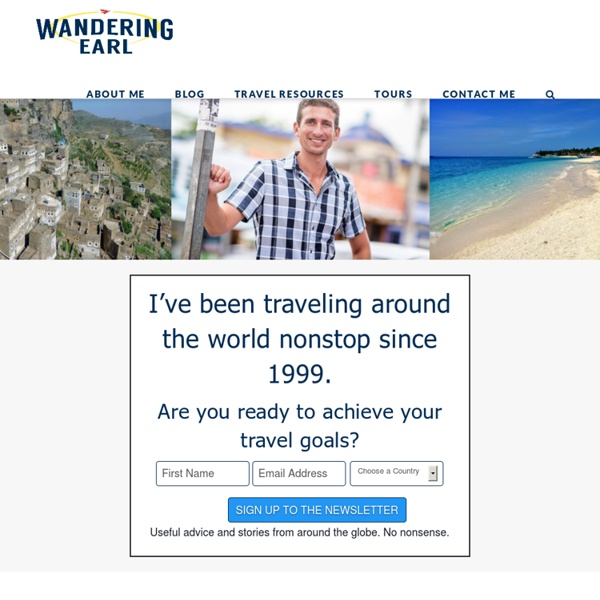 Best travel moments of 2012 from around the world Travelers share their best travel moments of 2012 Backpacking through Europe. A cruise to Antarctica. A road trip across America. Exploring New Zealand and Australia. The Healthiest I've Felt in a Long Time It’s all thanks to the beach. I’ve been planted here on Palolem Beach in Goa for 17 days already and this morning I realized that it’s been a long time since I’ve felt this physically and mentally healthy. My daily routine since arriving in this paradise has been quite simple and it has barely changed at all during my stay.

skinny backpacker I've spent much of the past two years moving in and out of Myanmar / Burma to see what makes the country tick. Having been separated from much of the world for decades thanks to a corrupt military regime and economic sanctions from much of the Western world, the country and its government have begun to open up more recently. The simplified version of this change that is portrayed in much of the media is just a thin slice of what's going on inside of the country. How the future of the people there will be shaped in years to come is what interests me, and is the focus of a long term project of mine. The goal is to have a series of gallery showings, and public speaking engagements when my work is completed sometime in 2015.

Why Your Twenties are Terrible/Awesome Or: Gah I’m turning 27 on Wednesday! When I was twenty-one years old my mother told me that her twenties were the hardest decade of her life. This kind of puzzled me at the time. After all- I’d just gotten the ability to drink legally; my life was going great! I was getting ready to graduate, my world was full of friends and endless possibilities. Electronics for the Digital Nomad My electronics bag is heavy. It’s probably heavier than my actual backpack. It’s the price I pay to live and work anywhere in the world. They say never to put all your eggs all in one basket but I feel more comfortable keeping the smaller bag with me at all times than putting any electronics under the bus.

The Globe-Trekking Gecko Recently I watched the movie ‘Eat, Pray, Love’, mainly for the fact that it features Bali, plus the other two places it covers – Italy and India, are another two destinations that I would love to go to (watch this space!). Watching the scenes in the movie that were in Bali took me straight back to that humidity, the overwhelming sights and sounds, and the fragrant smells of the incense. There is one scene where they feature an island, and I swear it’s the same one that I went to when we went snorkelling in the coral reef. Of course, I could be totally wrong, but that experience of snorkelling there must be one of my favourite highlights of the trip.

Top 100 Travel Blogs by Domain and Page Authority, SEMRush and Alexa Tom, I will agree that it’s a shame that Sam and others buy FB Likes/Followers. Sam doesn’t deny it, so I assume it’s true. I disagree with Jonny Blair’s everyone’s-is-doing-it argument below. Backpackingmatt: Life's a Journey - A Budget Travel Blog ….oh, hey there! Sorry, I’m a bit late to the party. Things have been slightly crazy down here in Queenstown. Sometimes I forget that while I’m tucked away on the bottom of New Zealand’s South Island on the bottom of the world enjoying the start of winter, chances are it’s pretty warm where you are. The Day US Customs Found A Bullet In My Pocket On the flight from Delhi to Washington D.C., I spent a good two hours staring at the customs form that I was required to fill out. I had completed every section of the form, except for one. I just wasn’t quite sure if mentioning Pakistan and Afghanistan in the box that asked me to list the countries I had visited was such a good idea. As I wrote down the other countries I’d been to on this trip – Australia, Singapore, Thailand and India – I seriously wondered if I could get away with not listing the other two. (Of course, I wasn’t about to risk it and so I wrote them all down in the end.)

globe trekker blog “Globe Trekker,” shown in the U.S. on PBS, is my favourite travel show because it focuses on real travellers experiencing slices of local cultures, not sightseeing. McCormick is my kind of traveller. Her enthusiasm for the places she visits is infectious and you can’t help but conclude that she’d be a fun person to travel with. She got the travel bug in college and has found a way to make a living out of her wanderlust. McCormick has lived in three U.S. states plus Argentina, Japan, Spain and the U.K., but says she’s now settling down in New York. We spoke to her this week about her favourite places, how she balances family life with her nomadic lifestyle and how she landed her dream job. I want to travel for the rest of my life - 15 travel bloggers tell how to do it After a lovely childhood in Upstate New York and four years spent living my big city dreams in Brooklyn, I finally succumbed to my vagabond fantasies and bought a one way ticket out the country. Two years later, and I'm still at it. I'm currently reporting from a small bungalow on the island of Gili Trawangan in Indonesia.