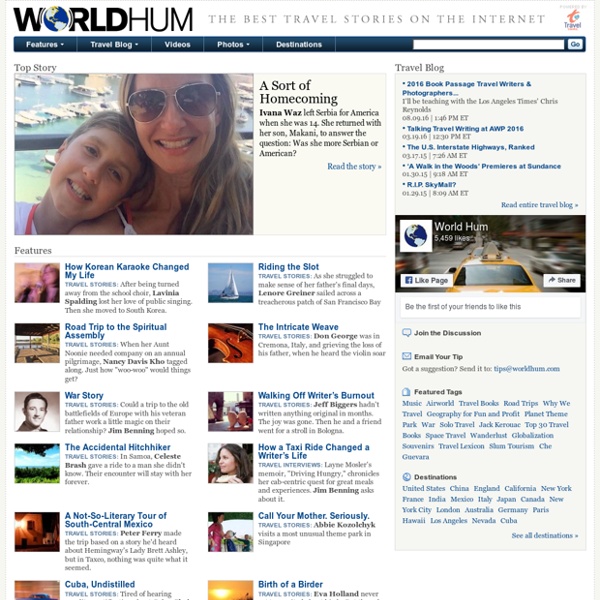 The author spent months sailing along a proposed oil tanker route off British Columbia. Eva Holland talks to him about the new book that resulted from the voyage. Read the interview » Top Story Features Gone Reading

9 Places Where You Can Retire and Live Like a King Retiring to Boca Raton might might appeal to some aging Baby Boomers, but what about those planning to retire early – due to sound investments, for instance – or, those who are looking for a little post-career adventure? Whatever your age, retirement should be an opportunity to do all the things that you always wanted to do, but were too busy to try. Perhaps you’ll pursue a neglected hobby or even launch another business but this time from a more exotic locale. From changes in scenery to endless recreation, business tax breaks to huge exchange rate benefits, a number of international locations are well-worth consideration as retirement destinations. For those not yet looking to retire, they make good vacation getaways as well:

Meteora The Katholikon of Holy Trinity Monastery, Meteora. History[edit] The Theopetra caves 5 kilometres (3.1 mi) south of Meteora had inhabitants fifty millennia ago.[4] The oldest known example of a man-made structure was found within a prehistoric cave in central Greece, according to the Greek culture ministry. Life Nomadic I call my products "life changing products" because that's what they are. I only write material that I believe has the power to seriously change you for the better, and I will stop selling a product if I don't get that sort of feedback. I constantly get emails from people thanking me for making a huge impact in their lives.

Top 10: Things To Do in Istanbul, Turkey Istanbul is one of the most dynamic, beautiful and exciting cities in the world. You could easily spend weeks there and still not see everything. Located on both sides of the Bosporus Straight (which connects the Black Sea to the Sea of Marmara), the city of Istanbul is split across two continents—Europe and Asia. 10 Weird and Mysterious Places on Earth digg 1. Mystery Spot Mystery Sport is a tourist attraction near Santa Cruz, California, famous because of its disrespect to the laws of physics and gravity. The odd cabin, although seems like lying on flat ground, makes those who enter inside swinging all the time. The most probable theory that tries to explain this says that it’s all about “tilt-induced visual illusion.

15 Amazing Castles from Around the Globe Although designed and built for the prominent purpose of defense, today the castles seem like somewhat unrealistic constructions straight from the fairytale world. From solid strongholds to oriental fortresses and highly decorative palaces, the castles are our connection to the past, where legends mix with history and reality blends with a fairyland. This fairytale castle is the historical seat of the Prussian Kings and German Emperors. Its origin dates back to the Middle Ages - it was built in the 11th century, then completely destroyed in 1423 and reconstructed in 1461. The view from the castle that stands on top of Mount Hohenzollern (855 m) is as stunning as the complex itself. The castle is located about 50 kilometers (30 mi) south of Stuttgart, the capital of the Baden-Württemberg state.

Globe Trekker TV.com - adventure travel on American Public Television Globe Trekker transports viewers to remarkable destinations via stunning cinematography and through the eyes of interesting and charismatic hosts Ian Wright, Justine Shapiro, Zay Harding, Megan McCormick, Brianna Barnes, Holly Morris, Judith Jones, and more. Live as the locals do, and explore with us off-the-beaten-path locations brimming with intoxicating culture, unique cuisine and extraordinary landscapes. Pilot Productions produced 248 episodes of Globe Trekker between 1992 and 2016. Beastranger 6:48 am, February 1, 2011 By Lillian Has anything really changed? When I set out on this journey with Brian, I had a plan. I was going to write lots of poetry.