Read This If You Don’t Understand Why Someone Doesn’t Like You. When someone doesn’t want you, in the beginning, it will be hard. 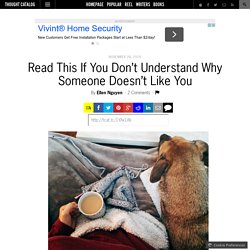 Sometimes, very hard. You will think there is something wrong with you, something so undesirable and unlovable that definitely needs to be fixed and changed. You will try to recall every tiny detail of what happened, examining like it’s a case file and you’re the lead detective just so you could pinpoint a reason why life didn’t go the way you wanted. But there is never a satisfying answer because even if it was the answer given by that person — most likely one to gently let you down, your bruised ego would refuse to believe it anyway.

That’s how endless questions won’t stop circling in your head and soon you will start to believe you are not good enough, or worse, happiness isn’t what you deserve. Luckily, over time, it will get better. As memories take you right back to where you were, you will wish for the millionth time that you could be someone else — someone prettier, smarter, cooler. The 50 Things You Need To Do For A Relationship To Last. Relationships are tough. 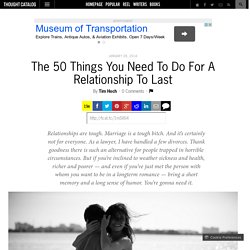 Marriage is a tough bitch. And it’s certainly not for everyone. As a lawyer, I have handled a few divorces. Thank goodness there is such an alternative for people trapped in horrible circumstances. 45 Questions To Guarantee You’ll Never Have A Boring Date Again. 10 Everyday Things That Can Save A Relationship. 1. 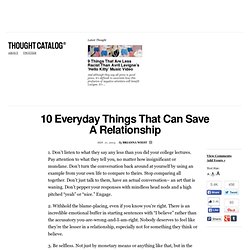 Don’t listen to what they say any less than you did your college lectures. Pay attention to what they tell you, no matter how insignificant or mundane. Don’t turn the conversation back around at yourself by using an example from your own life to compare to theirs. Stop comparing all together. Don’t just talk to them, have an actual conversation– an art that is waning. I’m A Sex Therapist And Here Are My Top 5 Pieces Of Advice For Having Sex That Doesn’t Suck.

I have the best job in the world — I’m a sex therapist in San Francisco. 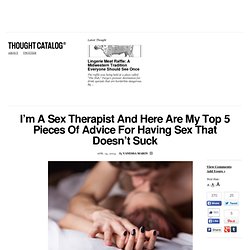 I get paid to help people have better sex. I like to think of what I do as creative sexual problem solving. My clients come to me with issues like orgasmic difficulties and mismatched sex drives. They want to learn how to communicate about sex, how to feel more sexually confident, and how to rescue their floundering sex lives. I keep my antennae tuned into the particular challenges of their situations, then use a combination of accurate information, personalized exercises and good ol’ fashioned advice to help them start creating the sex lives of their dreams. While a lot of my work is teaching the logistical stuff — “Here’s a diagram of your clitoris,” or, “Let’s talk to your doctor about running some hormone tests,” the majority of what I do is help people change the ways they think about their sex lives.

Be more playful. Give yourself permission to be yourself in the bedroom, and embrace the silly side of sex. 31 People Reveal Their One Moment Of Clarity That Will Completely Change The Way You See Life. Larry Hardin. 19 Surprisingly Hot Things Guys Do Without Realizing It. I Planned A Trip To Venice To Cheat On My Boyfriend With A Man I Only Met Once. He was one of those characters that throw themselves into your life sometimes, people who come and then go and leave only a fascinating story to be told at parties when you get a few drinks in. 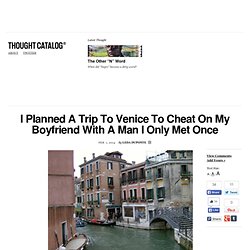 He burst into my house with his pack of friends and his flask of Austrian apricot liquor and his tweed jacket with the leather elbows making him look like a candidate for the next Doctor, and he looked at me and grinned like he owned the place. He was cute and he was charismatic and he told me stories about his world travels and, oh, god, he could dance (ladies, you understand), and I knew I had to have him. 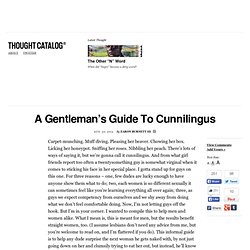 Muff diving. Pleasing her beaver. Chowing her box. Licking her honeypot. Sniffing her roses. What It Feels Like To Be Eaten Out. Thank you to everyone who submitted responses to “What It Feel Likes To Get Your D Sucked.” 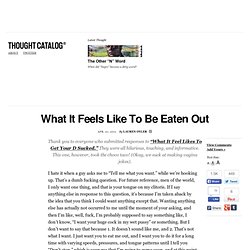 They were all hilarious, touching, and informative. This one, however, took the choco taco! (Okay, we suck at making vagina jokes). An 8-Step Vagina Manual For Those Not In Possession Of One. Look, guys, I don’t blame you for not always knowing about vaginas. 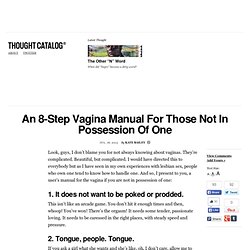 They’re complicated. Beautiful, but complicated. I would have directed this to everybody but as I have seen in my own experiences with lesbian sex, people who own one tend to know how to handle one. And so, I present to you, a user’s manual for the vagina if you are not in possession of one: 1. 7 Things Sexier Than Dirty Talk. ‘Talk dirty to me’ is a scary sentence, it puts on the pressure.

Now, not only do I have to make sure my stomach looks flat while I’m naked, I’m making all the appropriate ‘turned on’ noises and my hair isn’t getting stuck to my lipgloss but I also have to become a creatively dirty story teller. Am I telling you what I’m going to do you to? What you should do to me? Am I narrating what’s happening or coming up with an elaborate ‘here’s what SHOULD be happening’ scenario? Forget about that. A Field Guide To Flirting For The Socially Awkward. As we all know being single is a horrific affliction. 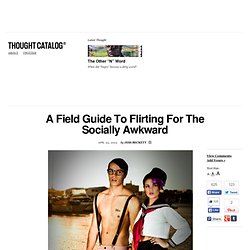 It’s social leprosy, and it’s unacceptable of you — you single ogre. If you emerge from whatever bridge you’ve been living under and follow my simple plan you will have the entire room smitten. In fact, bookmark this on your phone and go mingle right now. Dating 101: 20 Secrets (That Are Not Really Secrets) About Dating. 10 Of The Crappiest Things Insecure Guys Love To Do. 1. See that you looked in the vicinity of their significant other, prompting them to grab hold of that person tightly and be overly affectionate. Perhaps this is like a territory mark for people worried that someone else making eye contact with their girlfriend is a challenge to a duel for her affection. 2. Make fun of Drake’s music, but secretly listen to it and find the feelings & emotions relatable. 10 Things No One Tells You About Sex. 1. It is possible to occasionally sleep with your friend without it turning into some big ol’ thing.

Why is there such intense debate about this? Why did Hollywood have to poop out two identical movies that explore this STRANGE and TWISTED phenomenon known as, “friends with benefits”? “OMG,” a fearful woman screams. “Is it true? 2. 6 Things We Have To Stop Doing During Sex. 1. 69ing OK, who is still pretending that they like to 69 with their partner? Because I would really like to meet them and say, “Can you stop?

Sexual novices everywhere are 69ing because they heard somewhere that it was DARING, KINKY, COOL and it’s not!” 69ing is your own personal private hell.