Donald Trump's mercantilist trade policy was debunked by economist Adam Smith more than 200 years ago — Quartz. The arrivals area of Mexico City’s airport, decked out with advertising for Huawei phones and services, might suggest to a visitor that Mexico, like other parts of Latin America, is one of China’s new economic and political expansion grounds. 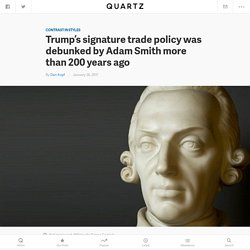 Mexican President Enrique Peña Nieto’s arrival in China Monday (Sept. 4) for a three-day visit to boost trade ties will strengthen that impression. The reality? It’s far more complicated. China’s president Xi Jinping has announced plans for US$500 billion in trade and US$250 billion in direct investment for the Latin American and Caribbean region for 2015-2019 (see link above), but bringing Mexico firmly into that plan is proving arduous.

That’s largely thanks to the much-maligned North America Free Trade Agreement (NAFTA), which US president Donald Trump has been raging against since his campaign, most recently calling it “the horrible, terrible NAFTA deal.” Ties with China have warmed substantially since Peña Nieto was elected. The Yield Curve Inverted! - MoneyBeat. Dubya's Double Dip? If the story of the current U.S. economy were made into a movie, it would look something like ''55 Days at Peking.'' A ragtag group of ordinary people -- America's consumers -- is besieged by a rampaging horde, the forces of recession. 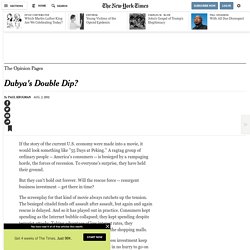 To everyone's surprise, they have held their ground. But they can't hold out forever. Will the rescue force -- resurgent business investment -- get there in time? The screenplay for that kind of movie always ratchets up the tension. Sanchez-your-life-your-work-kindle. Milton Friedman: "I Think the Austrian Business-Cycle Theory Has Done the World a Great Deal of Harm" This is from a 1998 interview with Milton Friedman: EPSTEIN You were acquainted with the Austrian economist Friedrich Hayek and also are familiar with the work of Ludwig von Mises and his American disciple, Murray Rothbard. 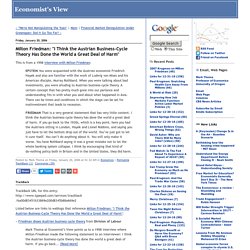 When you were talking about bad investments, you were alluding to Austrian business-cycle theory. A certain concept that has pretty much gone into our parlance and understanding fits in with what you said about what happened in Asia. There can be times and conditions in which the stage can be set for malinvestment that leads to recession. FRIEDMAN That is a very general statement that has very little content. 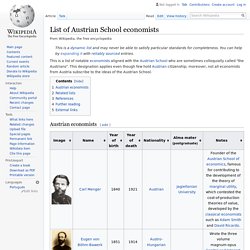 This designation applies even though few hold Austrian citizenship; moreover, not all economists from Austria subscribe to the ideas of the Austrian School. Austrian economists[edit] Related lists[edit] References[edit] Further reading[edit] Holcombe, Randall G., ed. (1999). Home The Future of Freedom Foundation. An Introduction to Austrian Economics and the Free Society – Voices of Liberty. April 6, 2015—In this episode of The Libertarian Angle, we learn the origins of Austrian economics. 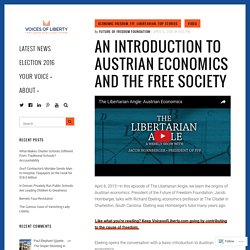 President of the Future of Freedom Foundation, Jacob Hornberger, talks with Richard Ebeling, economics professor at The Citadel in Charleston, South Carolina. Ebeling was Hornberger’s tutor many years ago. Like what you’re reading? Keep VoicesofLiberty.com going by contributing to the cause of freedom. Ebeling opens the conversation with a basic introduction to Austrian economics: “The term Austrian economics was coined in the late 19th century. A Beginner’s Guide to Austrian Economics – Voices of Liberty. “Everyone carries a part of society on his shoulders; no one is relieved of his share of responsibility by others. 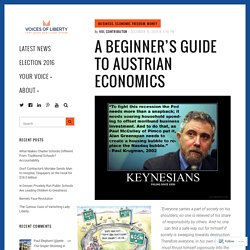 And no one can find a safe way out for himself if society is sweeping towards destruction. Therefore everyone, in his own interests, must thrust himself vigorously into the intellectual battle. None can stand aside with unconcern; the interests of everyone hang on the result. Whether he chooses or not, every man is drawn into the great historical struggle, the decisive battle into which our epoch has plunged us.” – Ludwig von Mises December 16, 2014—Of course, Mises above is addressing the need for “everyone” to understand basic, sound economics.

Here is a beginner’s guide in which we’ll briefly examine the basic principles and answer the basic questions about Austrian economics. It’s important to note that Austrians sound a minority voice in economics and are widely marginalized by mainstream Keynesian economists in academia and media. News - Page 1. Growth Theory As It Ought to Be: Comments on Kurz and Salvadori's Two Survey Papers on Old and New Growth Theory. Is there a direct relationship between government expenditures and economic growth? - ResearchGate. The question whether or not government expansion causes economic growth has divided policy makers into two distinctive theoretical camps, as proponents of either big government or small government. 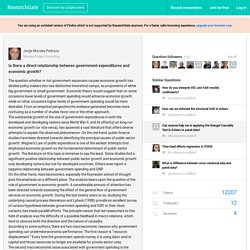 The substantial growth of the size of government expenditures in both the developed and developing nations since World War II, and its effect(s) on long-run economic growth (or vice versa), has spawned a vast literature that offers diverse attempts to explain the observed phenomenon. On the one hand, public finance studies have been directed towards identifying the principal causes of public sector growth. Friedrich Hayek - Wikipedia. Friedrich August von Hayek CH FBA (/ˈhaɪək/; German: [ˈfʁiːdʁɪç ˈaʊ̯ɡʊst ˈhaɪɛk]; 8 May 1899 – 23 March 1992), often referred to by his initials F. 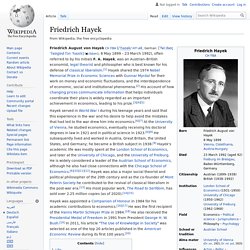