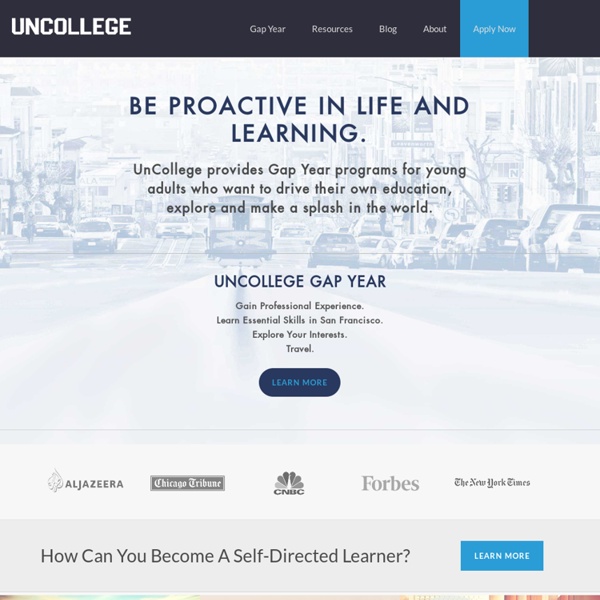 PAYING ATTENTION: 30 SENSORY STRATEGIES These days, it’s not uncommon to hear about kids who have difficulty with paying attention. They can’t sit still, they can’t keep their eyes on what they’re doing, or they miss important instructions and details. *This is a sponsored post written on behalf of ARK Therapeutic Services. All opinions are 100% ours. Our sensory systems help keep our bodies and minds at an optimal state of alertness and arousal for any given situation. Calm enough to listen, attend, work, and engage but not so calm that we’re falling asleep. Saying No to College Two years ago, Mr. Goering was a sophomore at the University of Kansas, studying computer science and philosophy and feeling frustrated in crowded lecture halls where the professors did not even know his name. “I wanted to make Web experiences,” said Mr. Goering, now 22, and create “tools that make the lives of others better.” So in the spring of 2010, Mr. Goering took the same leap as Mr.

Colleges Expect Lower Enrollment The survey, released by the credit ratings agency Moody’s Investors Service on Thursday, found that nearly half of colleges and universities that responded expected enrollment declines for full-time students, and a third of the schools expected tuition revenue to decline or to grow at less than the rate of inflation. “The cumulative effects of years of depressed family income and net worth, as well as uncertain job prospects for many recent graduates, are combining to soften student market demand at current tuition prices,” Emily Schwarz, a analyst and lead author of the report, said in a statement. The growing financial challenges for colleges and universities come as students and graduates have amassed more than $1 trillion in student debt, and many are struggling to pay their bills. Nearly one in six people with an outstanding federal balance is in default, the federal government says. But that attitude has changed, in part because family incomes have declined. Ms.

150 Free Textbooks: A Meta Collection Free textbooks (aka open textbooks) written by knowledgable scholars are a relatively new phenomenon. Below, find a meta list of 200 Free Textbooks, and check back often for new additions. Also see our online collection, 1,700 Free Online Courses from Top Universities. Art History A Textbook of the History of Painting by John Charles Van Dyke, Rutgers

50+ Genius STEM Activities for Kids - The Stem Laboratory With a name like The STEM Laboratory, it’s no surprise that we’re obsessed about science, technology, engineering and math (STEM) activities for kids. These 50+ STEM projects are sure to keep little scientists engaged, learning and well-prepared for their STEM-filled future. This post contains Amazon affiliate links. Science Projects There are countless science experiments for kids but these 14 projects are our hands-down favorites! Philanthropy Daily® » Anti-intellectualism and higher education The new emphasis on accountability in higher education can have its upsides but the last couple of weeks have reminded me about the anti-intellectualism that often seems to come with such movements. A couple of weeks ago, Rick Scott, Governor of Florida, suggested that producing degrees in anthropology was not a "vital interest" of his state. He told some editorial writers that there are only a limited number of jobs for anthropologists and wondered why were were producing so many. As a case in point, he cited his daughter who has a degree in anthropology from the College of William and Mary and said that her major did not lead her to a job.

At P-TECH, Educators and Employers Work Together to Solve the Skills Gap This story is the fourth in a six part editorial series exploring the balance between student learning and job skills. We’re asking leaders and thinkers in education and technology fields: Can America educate its way out of the skills gap? This series is brought to you by GOOD, with support from Apollo Group. Learn more about our efforts to bridge the skills gap at Coding for GOOD. Mentoring has always been a very important part of my life. Swedish for immigrants Swedish For Immigrants (normally known as SFI or Svenskundervisning för invandrare in Swedish) is the national free Swedish language course offered to most categories of immigrants. Immigrants who speak Danish or Norwegian are ineligible for free Swedish tuition through SFI. All other persons who have emigrated to Sweden are entitled by law to Swedish language education. SFI is directed towards people who lack basic knowledge in Swedish and are of the minimum age of sixteen.[1] The training is paid for by the municipality (local authority) in which the immigrant lives, and applications to take the course are made to the municipality's adult education department (kommunens vuxenutbildning).

PISA This years focus is mathematics with an additional test in creative thinking. The new PISA 2021 mathematics framework was recently launched. Preparations for this test are underway with participants from 36 OECD members and likely 50+ non-members involved. 12 Dozen Places To Educate Yourself Online For Free All education is self-education. Period. It doesn’t matter if you’re sitting in a college classroom or a coffee shop. No Teachers, No Class, No Homework; Would You Send Your Kids Here? - Emily Chertoff Democratic schooling may be the most radical experiment in education of the past 100 years. A.S. Neill in a Summerhill classroom. The image is undated.

Bridge to Learning - Educational Research Hardly a day goes by without the announcement of a new MOOC or a new tie up between universities to offer MOOCs. this despite widespread scepticism amongst educationalists as to the pedagogic model being offered by the ‘commercial’ or x-MOOC providers or indeed any particularly convincing financial model. And yet the original idea behind the MOOC as developed by Downes, Siemens and others is not dead. Today I received an email from Yishay Mor about a new MOOC being launched in early 2013. The OLDS MOOC “Learning Design for a 21st Century Curriculum” is a project based 9 week course. We expect 500-1000 participants, and we hope a large portion of these will be working on a group project throughout the MOOC, dedicating 3-10 hours a week to it, and producing an innovative, robust and meaningful design for a learning activity or curricular resource. We aim to provide a semi-structured, highly interactive, constructive and collaborative learning experience.