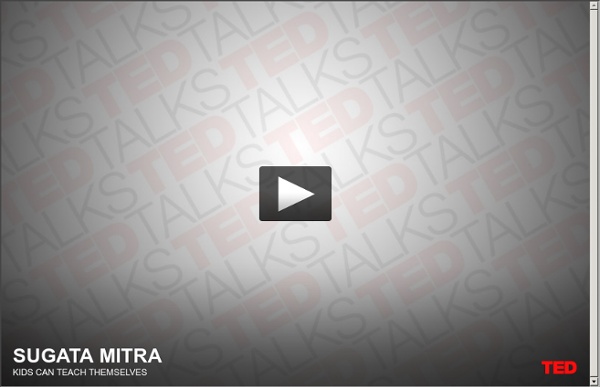 Riesman model of Education and Culture In April 1997 the Harvard University Gazette reported, "The journal Contemporary Sociology has named the best-selling sociology book ever... The Lonely Crowd (Yale University Press) by David Riesman, [with] Nathan Glazer, and Reuel Denney, which the journal says has sold some 1.4 million copies since it was published in 1950." Interestingly, if the web is anything to go by, it is the fact of its popularity and influence which is most remarked, rather than what it says. Chaîne de TEDxTalks‬‏ Musician Scott Mescudi, aka Kid Cudi, returns to his high school to talk about growing up and his career path in the music industry. Born Scott Ramon Seguro Mescudi in Cleveland, Kid Cudi began rapping while attending Shaker Heights High School and later Solon High School. In 2004, Kid Cudi moved to Brooklyn, NY to pursue his rap career.

Sugata Mitra Sugata Mitra (Bengali: সুগত মিত্ৰ; born 12 February 1952) is Professor of Educational Technology at the School of Education, Communication and Language Sciences at Newcastle University, England. He is best known for his "Hole in the Wall" experiment, and widely cited in works on literacy and education. He is Chief Scientist, Emeritus,[citation needed] at the for-profit training company NIIT. Body language, not facial expressions, broadcasts what's happening to us If you think that you can judge by examining someone's facial expressions if he has just hit the jackpot in the lottery or lost everything in the stock market -- think again. Researchers at the Hebrew University of Jerusalem and at New York University and Princeton University have discovered that -- despite what leading theoretical models and conventional wisdom might indicate -- it just doesn't work that way. Rather, they found that body language provides a better cue in trying to judge whether an observed subject has undergone strong positive or negative experiences. In a study published this week in the journal Science, the researchers present data showing that viewers in test groups were baffled when shown photographs of people who were undergoing real-life, highly intense positive and negative experiences.

The student authored syllabus Author: Suz Burroughs In either formal learning, informal learning or models which transition between the two, there are many opportunities for learners to co-create the syllabus and/or outline their own course of action. The sage on the stage of formal instruction must become at the most a guide on the side who acts as a coach appearing only when needed rather than as a lecturer who determines the content that the learners need to master. TEDxNewWallStreet - 03/11/2012 TEDxNewWallStreet explores moving banking from the Industrial Age, into the Information Age. In 2009, Marc Andreessen remarked "banking is just information science." Inspired by Marc's words, Bruce Cahan and the Team set out to organize TEDxNewWallStreet to explore a banking system different than the Industrial Age system we inherited. What if Silicon Valley or other technology clusters grew New Wall Streets, on quite different terms than exist in New York? How would they spearhead technology in faster, cheaper, more transparent and accountable ways that contrast with the recent (and recurring) issues of the game as defined and played on old Wall Street? Let's move beyond pundits who deflect true innovation and reinforce a cynical inevitability by portraying bankers and banking as forever unhealthy or worse.

BrainTrain - Changing the Way People Think Insurance coverage varies according to insurance company and state, but all major carriers now cover Cognitive Rehabilitation. It is billed in 15 minute units with fees paid at $35 to $55 per unit, depending on the region of the country. A treatment plan is required and progress must be documented. In addition, the patient needs to be qualified to show that he or she can possibly benefit from this form of treatment. Currently, neurological disorders, strokes, cancer treatment (medicines used to treat cancer are toxic to the brain) and traumatic brain injuries are covered. Alzheimer's is usually not covered.

Journal of e-Learning and Knowledge Society The Challenge of Open Education Eleonora Pantò, Anna Comas-Quinn Abstract Digital culture and the remix culture it has generated have changed the way in which knowledge and learning are constructed.‬ The last decade since the Massachusetts Institute of Technology (MIT) launched the Open Courseware initiative (OCW) in 2002 has seen a significant increase in the number of initiatives related to Open Educational Resources (OER) and open education in general. New institutions, with different objectives and business models, are emerging rapidly outside traditional universities: start-ups that offer free Massive Open Online Courses (MOOC), consortia of universities from four continents that share teaching materials and infrastructure, and universities where classes are taught by the students themselves.‬

4 secrets to reading body language like an expert: How important is body language? 55% of what you convey when you speak comes from body language. In fact, when you’re speaking about something emotional only about 7% of what the other person hears has to do with the words you use. More often than not you can tell what a politician thinks about an issue just by watching their hands. New Report Reimagines Learning in a Networked Society A research report released today by the Connected Learning Research Network tackles the big issues in education and fundamentally reimagines what learning looks like in the 21st century. The Connected Learning Research Network – a group of nine interdisciplinary thinkers (including our own Katie Salen) – is focused on understanding the opportunities and challenges that arise for learning in today’s changing media ecology, and developing a new model of connected learning: learning that is socially-connected, interest-driven, and geared towards educational opportunity for all. In response to these trends, the document offers a new framework to expand the reach of meaningful and sustained learning. Connected learning, the report argues, embodies the values of equity, participation, and social belonging by integrating the divergent spheres of peer culture, interests, and academic content.

Project-Based Learning Research Review Editor's Note: This article was originally written by Vanessa Vega, with subsequent updates made by the Edutopia staff. Studies have proven that when implemented well, project-based learning (PBL) can increase retention of content and improve students' attitudes towards learning, among other benefits. Edutopia's PBL research review explores the vast body of research on the topic and helps make sense of the results.

Company's skills tests offer glimpse of alternative credentialing The big enchilada of potential disruptions to higher education is if employers go outside of the academy to size up job seekers. While that prospect remains fanciful, for now, new approaches to skills assessment show what the future could look like. Take Smarterer, a Boston-based start-up that offers 800 free online tests for people to prove their chops in areas ranging from C++ programming to speaking English for business or understanding Gothic architecture.