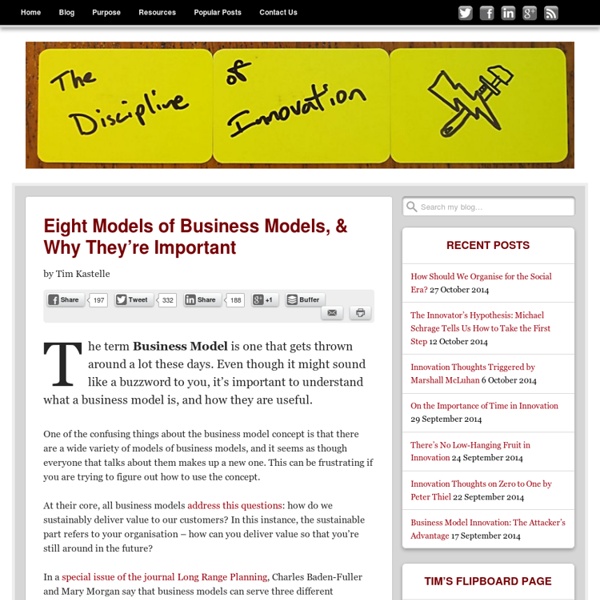 The term Business Model is one that gets thrown around a lot these days. Even though it might sound like a buzzword to you, it’s important to understand what a business model is, and how they are useful. One of the confusing things about the business model concept is that there are a wide variety of models of business models, and it seems as though everyone that talks about them makes up a new one. This can be frustrating if you are trying to figure out how to use the concept. At their core, all business models address this questions: how do we sustainably deliver value to our customers? In this instance, the sustainable part refers to your organisation – how can you deliver value so that you’re still around in the future? In a special issue of the journal Long Range Planning, Charles Baden-Fuller and Mary Morgan say that business models can serve three different purposes. Value Networks from Verna Allee: Verna was working with some of the basic concepts of business models in the 90s.

Amazon Proves Infertile Soil for Unions, So Far “Amazon’s culture and business model are based on rapid innovation, flexibility and open lines of direct communication between managers and associates,” Mr. Stanzel said. “This direct connection is the most effective way to understand and respond to the wants and needs of our associates.” Union officials think Amazon fights so hard to keep them at bay to prevent a domino effect among its warehouses. “This is Amazon’s biggest fear,” said Andy Powell, a district organizer for the International Association of Machinists & Aerospace Workers who is trying to organize Amazon fulfillment center workers in Delaware and several nearby states. “The minute one falls and people see they got a better deal, it’s going to be a cancer for them.”

Strategy October 26, 2011 Harvard Business Review By Chris Zook and James Allen The sharper your differentiation, the greater your advantage. Consider Tetra Pak, a company that in 2010 sold more than 150 billion packages in 170 markets around the world.

Business Models & Business-IT research As ‘value’ is one of the most common term in business model definitions, the obvious question is what is meant with value? Surprisingly, it is almost never further elaborated or discussed in business model books or articles. In general the term ‘value’ is used to refer to ‘the quality (positive or negative) that renders something desirable or valuable’ (Wordnet 3.0) or ‘something (as a principle or quality) intrinsically valuable or desirable’ (Merriam-Webster). It seems that when business model definitions refer to value, they mostly mean customer value (such as, Afuah, 2004; Dubosson-Torbay, Osterwalder, & Pigneur, 2002; Tapscott, 2001), while some refer to value for both the customer and the company (e.g., Bouwman, De Vos, & Haaker, 2008; Johnson, 2010).

Decapitated Churches in China’s Christian Heartland The campaign began in 2014, when the government abruptly announced plans to demolish a church in the neighboring city of Wenzhou, saying it had not received the proper building permits. Then the government began issuing orders for churches across the province to remove their crosses. The Salvation Church, a complex with three spires atop a three-story congregation hall, offices and a parking lot, quickly became a center of resistance. Hundreds of parishioners encircled the church to protect the cross, facing off against hundreds of riot police officers.

The Great Repeatable Business Model Idea in Brief Really successful companies build their strategies on a few vivid and hardy forms of differentiation that act as a system and reinforce one another. They grow in ways that exploit their core differentiators by replicating them in new contexts. And they turn the sources of their differentiation into routines, behaviors, and activity systems that everyone in the organization can understand and follow. Powerful differentiations deliver enduring profits only when they are supported by simple, nonnegotiable principles and robust learning systems that drive constant improvement across the business. Differentiation is the essence of strategy, the prime source of competitive advantage.

Alexander Osterwalder: Mapping Customer Pains to Value Proposition with Steve Blank (video via Standford University) Get the (FREE) Business Model Studio Resource Guide Continue and watch Alex use visual facilitation in front of a live audience. Table of Contents This Blog Linked From Here Saturday, April 11, 2009 Defining Your Business Model A business model isn't something you build from the ground up. When management-types ask about a business model — as in, "So what's your business model?" — they really want an answer to a much more direct and basic question: "How do you plan to make money?" Behind that question is a lineup of other questions:

How to: Business Model Blocks 16 blocks to visualize your business model All our business model examples are visualized with this set of 16 building blocks. To give more insight in how this works, we give a brief overview of the different building blocks. Using a common, visual language enables you to easily communicate business models to different audiences, to learn from successful models in other industries, and to quickly generate new variations and business models of the future. Once you grasp the building blocks below, check out our business model tools to design your own business model in seconds. Amazon Has Just Registered to Sell Ocean Freight (Image via Robert Scoble) Flexport has obtained information that Amazon China has registered to operate as an ocean freight forwarder in the United States. The Federal Maritime Commission now lists Amazon China in its directory of licensed Ocean Transportation Intermediaries—the list of companies authorized to sell ocean freight services.

Business Model Canvas Set to Explode I’d just finished a workshop on Business Model Canvas about gaining clarity in large organizations, when suddenly the flood gates seem to have opened up a day or so later, for me to see beyond and piece more of it together in my mind. After swirling around in this maelstrom of articles, tweets, new publishing, advanced announcements I had to gain some high ground to recover my breath and think a little more. Catching my breath, here is my clarity take and prediction for the BMC. Ignoring lots of early warning signs Maybe I should have seen this coming earlier but sometimes you hear a distant rumble but you simply shrug your shoulders and get on with your own work. This week it hit me so I spent some time piecing together different aspects around the shifts taking place on the Business model canvas that have been going on in different parts of the world for my prediction:

Revenue Model Types: The Quick Guide A revenue model describes how a business generates revenue streams from its products and services. It is one of the key components of the business model. Existing businesses interested in expanding to new areas or adjusting to a new generation of competitors should carefully consider their revenue models. A strong revenue model is also most important for early stage startups; their investors are usually very conscious of monetization.