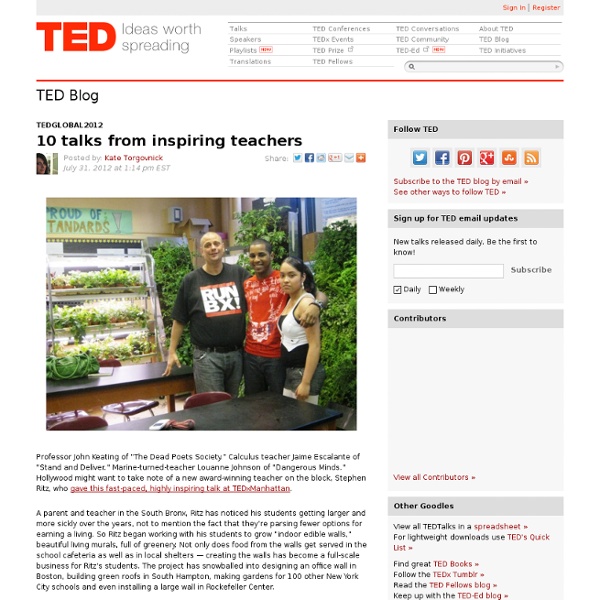 Professor John Keating of “The Dead Poets Society.” Calculus teacher Jaime Escalante of “Stand and Deliver.” Marine-turned-teacher Louanne Johnson of “Dangerous Minds.” Hollywood might want to take note of a new award-winning teacher on the block, Stephen Ritz, who gave this fast-paced, highly inspiring talk at TEDxManhattan. Stephen Ritz: A teacher growing green in the South BronxA parent and teacher in the South Bronx, Ritz has noticed his students getting larger and more sickly over the years, not to mention the fact that they’re parsing fewer options for earning a living. “Kids from the poorest Congressional district in America can build a 30 x 15 foot wall — design it, plant it, and install it in the middle of New York City,” says Ritz. Since starting the edible wall project, Ritz has seen his kids’ attendance jump from 43 to 90 percent. In honor of Ritz’s work watch nine more talks from truly inspiring teachers below.

The student authored syllabus Author: Suz Burroughs In either formal learning, informal learning or models which transition between the two, there are many opportunities for learners to co-create the syllabus and/or outline their own course of action. The sage on the stage of formal instruction must become at the most a guide on the side who acts as a coach appearing only when needed rather than as a lecturer who determines the content that the learners need to master. In the following inspirational but certainly not prescriptive examples, we will focus on co-learning methods drawn from a Social Constructivist perspective, which fits nicely here. We offer a few examples below to show a range of learner centered approaches. The following methods will result in each co-learner gaining deep knowledge in a specific topic and moderate knowledge across several topics. We also need effective methods for groups which contain novices, experts, and everyone in between. 3 example designs to structure the learning Content Tests.

Riesman model of Education and Culture In April 1997 the Harvard University Gazette reported, "The journal Contemporary Sociology has named the best-selling sociology book ever... The Lonely Crowd (Yale University Press) by David Riesman, [with] Nathan Glazer, and Reuel Denney, which the journal says has sold some 1.4 million copies since it was published in 1950." Interestingly, if the web is anything to go by, it is the fact of its popularity and influence which is most remarked, rather than what it says. I once met Riesman when I was an undergraduate, and he was a visiting professor. That memory has not unduly influenced my respect for his book, which could hardly be written today, so sweeping and courageous is it in its scope. What follows is a sedimented account of the main argument of the book, with particular reference to education. RIESMAN D, with GLAZER N and DENNEY R (1950) The Lonely Crowd: a study of the changing American character New Haven; Yale University Press (revised and abridged ed.

Hacker Ethics and Higher Learning It is easy to be distracted by the immense technological changes affecting higher education today. Change is here. We are all faced with it in our classrooms and our offices, and we see it in the lives of students, donors, administrators, and alumni. The changes are happening so fast; the quality of what is considered “normal” is transforming quickly. The Rise of Computing and Digital Connectivity I became infatuated with computers in college. Nearly thirty years later, Kirby’s perceptive comment rings even more true today. In the late 1980s, our banks, our phone companies, our local and federal governments, and our colleges and universities were creating computer “networks” to manage people and processes, to ease the coordination of projects, and to accelerate the pace of communication and decision making. When I was introduced to the digital world, it was a fairly limited arena. Higher education is caught in this larger transition. The Hacker Ethic (and Its Concern for Education) 1.

A Brief History of Anti-Intellectualism in American Media The June 2008 cover of the Washington Post Magazine featured reporter Liza Mundy’s article “The Amazing Adventures of Supergrad.” Under this title ran the teaser, “The most sophisticated, accomplished, entitled graduates ever produced by American colleges are heading into the workplace. And employers are falling all over themselves to vie for their talents.” The lengthy piece portrays Emma Clippinger, then a Brown University junior who was double-majoring in developmental studies and comparative literature, serving as captain of the equestrian team, and helping run Gardens for Health International, an organization she cofounded that focuses on the nutrition of HIV-positive Rwandans. Clippinger also is noted for having worked on Martin Scorsese’s The Departed, having interned with the Clinton Foundation, and being fluent in French (along with speaking some Kinyarwanda and Wolof, languages in Rwanda and Senegal, respectively). Little Teaching and Learning Where are the Core Functions?

Philanthropy Daily® » Anti-intellectualism and higher education The new emphasis on accountability in higher education can have its upsides but the last couple of weeks have reminded me about the anti-intellectualism that often seems to come with such movements. A couple of weeks ago, Rick Scott, Governor of Florida, suggested that producing degrees in anthropology was not a "vital interest" of his state. He told some editorial writers that there are only a limited number of jobs for anthropologists and wondered why were were producing so many. As a case in point, he cited his daughter who has a degree in anthropology from the College of William and Mary and said that her major did not lead her to a job. A predictable uproar over these comments ensued, with academics across the country accusing Scott of knowing nothing about higher education. As it turns out, Mr. Parents have joked for years about their kids' decisions to major in English or Philosophy, complaining to each other that these are not practical majors. What accounts for those gaps?

The Challenge of Open Education | Pantò | Journal of e-Learning and Knowledge Society The Challenge of Open Education Eleonora Pantò, Anna Comas-Quinn Abstract Digital culture and the remix culture it has generated have changed the way in which knowledge and learning are constructed.‬ This work is licensed under a Creative Commons Attribution 3.0 License. Journal of e-Learning and Knowledge Society | ISSN (online) 1971 - 8829 | ISSN (paper) 1826 - 6223 © 2014 Je-LKS - Italian e-Learning Association (SIe-L).

New Report Reimagines Learning in a Networked Society A research report released today by the Connected Learning Research Network tackles the big issues in education and fundamentally reimagines what learning looks like in the 21st century. The Connected Learning Research Network – a group of nine interdisciplinary thinkers (including our own Katie Salen) – is focused on understanding the opportunities and challenges that arise for learning in today’s changing media ecology, and developing a new model of connected learning: learning that is socially-connected, interest-driven, and geared towards educational opportunity for all. In response to these trends, the document offers a new framework to expand the reach of meaningful and sustained learning. Connected learning, the report argues, embodies the values of equity, participation, and social belonging by integrating the divergent spheres of peer culture, interests, and academic content.

Company's skills tests offer glimpse of alternative credentialing The big enchilada of potential disruptions to higher education is if employers go outside of the academy to size up job seekers. While that prospect remains fanciful, for now, new approaches to skills assessment show what the future could look like. Take Smarterer, a Boston-based start-up that offers 800 free online tests for people to prove their chops in areas ranging from C++ programming to speaking English for business or understanding Gothic architecture. And not all the assessments are about getting a job -- there are quizzes on punk rock history and how to use Twitter. Smarterer's tests are crowdsourced, Wikipedia-style, and users can get a meaningful score by answering fewer than 20 questions, company officials said. Jennifer Fremont-Smith, Smarterer’s CEO, describes the company as a “third-party, super powerful assessment and credentialing tool.” “Our big vision is to be the global standard of skills measurement,” she said. “I believe that it is coming,” said Soares. 1. 1.

Reading, Writing, and Self-Esteem — Emerging Ideas By almost every measure, Cupertino High School in northern California is a successful place. Perched in the heart of Silicon Valley, Cupertino sent 85 percent of its senior class to college in 2009, and hundreds of its students take advanced placement classes each year. But some of Cupertino’s kids are doing better than others. On average, students there excel on California’s Academic Performance Index. The target is 800; Cupertino students scored 893. Nationwide, the numbers are even more striking: 94 percent of white young adults have earned a high school degree by age 24, compared to only 87 percent of blacks and 78 percent of Latinos. Recently, a group of social and cognitive psychologists have hypothesized that at least some academic disparities spring from toxic stereotypes that cause ethnic-minority and other students to question whether they belong in school and can do well there. Cohen and his colleagues tracked the original group of students through the eighth grade.

P2PU How we test ideas about learning. Current projects Use the drop down list above to see all current projects. Here are a few examples: The Citizen Science project makes scientific ideas and practice accessible to everyone.The Open Masters creates a template for anyone to pursue their own semi-formal study.The Mechanical MOOC automates a massive course experience. What’s a project? Projects take many forms- such as organizing face to face meetings around an existing course, building a community of ambassadors, conducting research experiments, running experimental courses, or building technology and tools- but all projects: Create something new- a tool, content, experience, model, etc.Test a hypothesis or question, or demonstrate a new way of doing things.Openly share what they are creating and learning. Projects are not afraid to fail, but they don’t whimper. P2PU projects are an important part of what we do, and they are rooted in our values of openness, community, and peer learning.

Why Anti-Authoritarians are Diagnosed as Mentally Ill (Note: Read Bruce Levine’s latest post: Anti-Authoritarians and Schizophrenia: Do Rebels Who Defy Treatment Do Better? In my career as a psychologist, I have talked with hundreds of people previously diagnosed by other professionals with oppositional defiant disorder, attention deficit hyperactive disorder, anxiety disorder and other psychiatric illnesses, and I am struck by (1) how many of those diagnosed are essentially anti-authoritarians, and (2) how those professionals who have diagnosed them are not. Anti-authoritarians question whether an authority is a legitimate one before taking that authority seriously. Evaluating the legitimacy of authorities includes assessing whether or not authorities actually know what they are talking about, are honest, and care about those people who are respecting their authority. Some activists lament how few anti-authoritarians there appear to be in the United States. Why Mental Health Professionals Diagnose Anti-Authoritarians with Mental Illness

Noam Chomsky on Democracy and Education in the 21st Century and Beyond Combat the epidemic of misinformation that plagues the corporate media! Click here to make a tax-deductible donation to Truthout and keep independent journalism strong. Noam Chomsky. (Photo: Andrew Rusk / Flickr ) Noam Chomsky is an American linguist, philosopher, political critic and activist. He is an institute professor and professor emeritus in the department of linguistics and philosophy at MIT, where he has worked for over 50 years. Also see: Democracy and Education in the 21st Century: Part 1, Daniel Falcone Interviews Noam Chomsky, June 2009 Daniel Falcone for Truthout: I wanted to ask you some questions about education in the 21st century. Chomsky: Not sure the topic exists. Falcone: Yes, right. Chomsky: That's an interesting question. And these were independent farmers. And there was more to it than that. So, it's kind of a mixture. Right now, we happen to be in a general period of regression, not just in education. The other is what's happening to teachers like you.