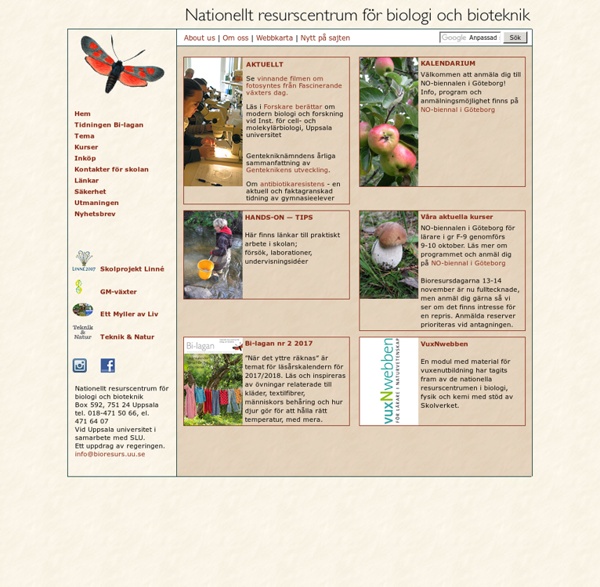 Life Science Prompts – Middle School Science (under construction 1.12.15) #1 Create the chart below into your notebook. Watch the video and fill in the missing information: Experience Just How Big the Universe is, in One Mind-Blowing Interactive You need a more recent version of Adobe Flash Player. Recently, NASA scientists combined data from the Spitzer and Hubble Space Telescopes to discover the most distant galaxy known to date. The galaxy, named Abell2744 Y1, was formed around 13.2 billion years ago when the universe was extremely young. As the universe is expanding, Abell2744 Y1 is currently closer to 40 billion light years away from us, an astounding distance. Science Printables and Freebies InstaScience at Elemental Blogging Helping you teach science through nature in an instant! Science Printables and Freebies! Here are the printables and freebies I have shared so far: Biology

Researchers explain why bicycles balance themselves Ruina Lab/Provided An experimental bicycle designed to eliminate the gyroscopic effect of spinning wheels and the "trail" of the front wheel is still stable on its own, disproving conventional theory. The 1949 movie "Jour de Fete" shows a postman frantically chasing his bicycle, which rides away on its own. Exploring Nature Educational Resource indicates a section of the site that is available to subscribing members only. Not a member? Feel free to click on these links and view the samples we have made available. Then check out the low cost and great benefits to subscribers! Home | Citing this Reference | About Us | Frequently Asked Questions | Contact Us | Privacy

Top 10 Most Dangerous Plants in the World 1. Most likely to eat a rat Giant Pitcher Plant: Nepenthes attenboroughii Discovered more than 5000 feet above sea level on Mount Victoria in the Philippines, the giant, carnivorous pitcher plant secretes a nectar-like substance to lure unsuspecting prey into a pool of enzymes and acid. A series of sticky, downward ribs makes it nearly impossible for trapped prey to escape. Biology Archives - Science Sparks Playing Detective – add some science to role play This post is all about adding a bit of science sparkle to role play, the activities should hopefully add a simulating and educational twist to an already fun game. My little boy is usually a bit reluctant to play role play games, but generally if I add in a task or some props he is much more enthusiastic. Here are just a few of our favourite ideas. Make a disguise/camouflage Where are you playing? Can you disguise yourself with some...

Acceleration - Physics for Kids! Acceleration is a way to measure how fast something is speeding up. Suppose you are riding your bike. You start out going very slowly, hardly pedaling at all. Now you begin to pedal as hard as you can, to speed up - you are accelerating. Galileo Drops the Ball - Virtual Experiment In around 1590 Galileo Galilei (1564-1642) climbed up the Leaning Tower of Pisa and dropped some balls to the ground. Two balls of different masses, but of similar shape and density that were released together hit the ground at the same time. Until then it was commonly believed that heavy things fall faster than light things. Many people still believe this, and casual observation of everyday phenomena often does tend to confirm this view. If you drop a brick and a feather at the same time the brick will probably hit the ground first.

Motion: Introduction Motion is one of the key topics in physics. Everything in the universe moves. It might only be a small amount of movement and very very slow, but movement does happen. Don't forget that even if you appear to be standing still, the Earth is moving around the Sun, and the Sun is moving around our galaxy. The movement never stops. Motion is one part of what physicists call mechanics. Animal Life Cycles (FREE Learning Material) We are still continuing our vertebrate study and at this point we explored the life cycle of each group. The aim of this study is to compare the life cycle of each group, to differentiate their development and identify their similarities as well. Prior to this, I introduced the Animal Kingdom and the Vertebrate group. To start off, we have The Life Cycle of a Frog for amphibians. Printable materials used here are my Animal Kingdom file, Vertebrate Sorting Cards and the Animal Life Cycles FREE printable.