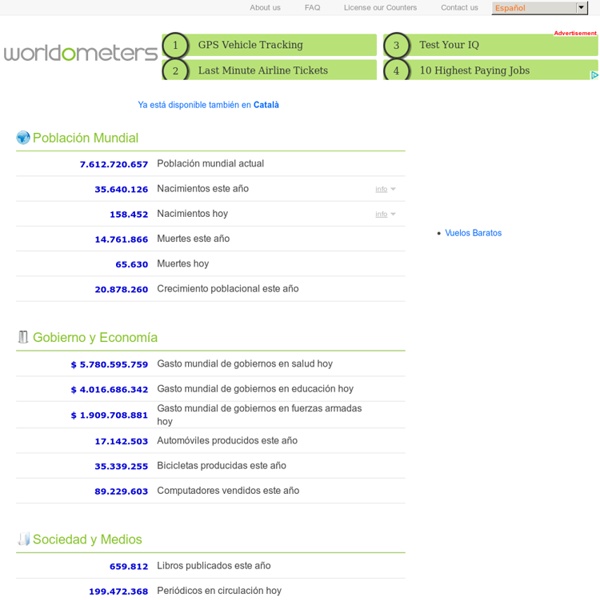 The Benefits of Interning on a Farm - The Atlantic - The Atlantic High in the mountains of Telluride, Colorado, Tomten Farms offers the opportunity to learn agriculture through an internship program. Named after a mischievous gnome in an old children’s tale, the farm teaches young people the pillars of permaculture. “Let’s give people the opportunity to try something,” says the farm’s owner Kris Holstrom in this short film, 9,000 Feet. “You learn the most from failing, but if you aren’t encouraged to try, you won’t.” Nowhere Citizens: Through Science and Technology, We Will Evolve! To be able to achieve this type of communication we resort to the use of communication technologies, usually in the form of physical objects (e.g. photographs, paintings, books). Most of these objects have common characteristics that change how time and space are experienced: temporality, spatiality and mobility. For example, a photograph is a view of the past.

Five Minute Upgrade – Making Your Design Pop 1. Brighten Colors If you have a design that you just feel isn’t anything special – stop – crank up the color intensity – then reevaluate. Saturation plays a big role as far as mood goes. About — NYC Garbage Justin Gignac is a New York City based artist and entrepreneur. He began selling garbage in 2001 after a co-worker challenged the importance of package design. To prove them wrong, he set out to find something that no one would ever buy, and package it to sell. Looking around the dirty streets of Times Square, garbage was the perfect answer. Twelve years later, over 1,400 NYC Garbage cubes have been sold and now reside in 30 countries around the world. In addition to original New York City Garbage, Gignac has also produced a number of limited edition cubes.

Future - Do we really live longer than our ancestors? Over the last few decades, life expectancy has increased dramatically around the globe. The average person born in 1960, the earliest year the United Nations began keeping global data, could expect to live to 52.5 years of age. Today, the average is 72. In the UK, where records have been kept longer, this trend is even greater. index Australopithecus deyiremeda is the name of the new fossil hominid species discovered in the site of Woranso-Mille —in the central region of Afar, in Ethiopia. The discovery, described in the international scientific journal Nature, takes to another level the on-going debate on early hominid origin and evolution in Africa. The scientific team lead by Professor Haile-Selassie has found several fossil remains (upper and lower jaws and a collection of teeth) in the sites of Burtele and Wayteleyta, in Woranso-Mille, in the central region of Afar, about 50 kilometres north of Hadar and 520 kilometres northeast of the capital Addis Ababa.

40 Minimalist Icon, Symbol & Pictogram Sets Minimalism is always a hot topic in web-design and there are many well-crafted minimalist websites and interfaces out there. While searching for some icons for a recent project I came across some great minimalist icon and symbol sets and thought I’d expand my search and share my findings here with you. Please note that some of those sets are not free and of course make sure you read the license before using them. How To Build The Creative Career Of Your Dreams – For The Interested You don’t have to start a company to act like one. One of the best ways to build a successful creative career is to study the way startup companies operate and adapt their tactics to fit your goals. Here are a seven simple ways to do that… 1. Figure Out Your Initial Investment

The Cheapest Generation - Derek Thompson and Jordan Weissmann In 2009, Ford brought its new supermini, the Fiesta, over from Europe in a brave attempt to attract the attention of young Americans. It passed out 100 of the cars to influential bloggers for a free six-month test-drive, with just one condition: document your experience online, whether you love the Fiesta or hate it. Young bloggers loved the car. Young drivers?

Quantum mechanics 101: Demystifying tough physics in 4 easy lessons Ready to level up your working knowledge of quantum mechanics? Check out these four TED-Ed Lessons written by Chad Orzel, Associate Professor in the Department of Physics and Astronomy at Union College and author of How to Teach Quantum Physics to Your Dog. 1. Particles and waves: The central mystery of quantum mechanics