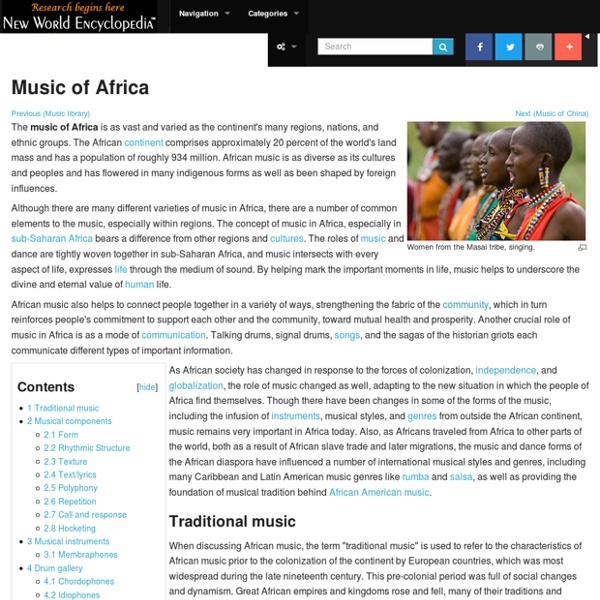 Women from the Masai tribe, singing. The music of Africa is as vast and varied as the continent's many regions, nations, and ethnic groups. The African continent comprises approximately 20 percent of the world's land mass and has a population of roughly 934 million. African music is as diverse as its cultures and peoples and has flowered in many indigenous forms as well as been shaped by foreign influences. Although there are many different varieties of music in Africa, there are a number of common elements to the music, especially within regions. The concept of music in Africa, especially in sub-Saharan Africa bears a difference from other regions and cultures. African music also helps to connect people together in a variety of ways, strengthening the fabric of the community, which in turn reinforces people's commitment to support each other and the community, toward mutual health and prosperity. Traditional music Musical components Gospel singers, N'Gaoundere, Cameroon. Form Texture Gallery

10 Most Popular African Musical Instruments When it comes to musical instruments, the African continent is well-known for its vast instruments. There are very many tribes or ethnic communities in Africa. Each tribe will have its own unique instruments. This has led to very many types of instruments which comprises of wind, stringed and also percussion. The following is a list of the 10 most popular African musical instruments, here goes the list Here is The List of 10 Most Popular African Musical Instruments List Of Music Genres In Africa There's more to African music than it just being "African"! Music genres are plentiful on this continent. Here's a short list of just a few of them: Celtic Music Instruments From the thump of the Bodhrán to the airy rasp of the wooden flute, celtic music is known by its instruments. Here's an introduction to the main players, with links to more information, for players and afficionados. Fiddle The fiddle is the mainstay of most Scottish and Irish music. The instrument is exactly the same as a violin; fiddle is simply the term used in traditional music. Despite it's popularity, there's not much information on the net about fiddles or fiddling.

Traditional Japanese Music There are several types of traditional, Japanese music (hogaku). Some of the most important ones are listed below: Gagaku: Ancient court music from China and Korea. It is the oldest type of Japanese, traditional music. Biwagaku: Music played with the Biwa, a kind of guitar with four strings.

Top 10 Best Indonesian Singers 1Agnes Monica Yes. She is just number 1 diva in Indonesia. She has everything that someone need to be a diva.. Great voice, good composer, good dancer, superb acting, best style and beautiful face.. What is "Klezmer Music"? What is "Klezmer Music"? Klezmer is a Hebrew word, a combination of the words "kley" (vessel) and "zemer" (melody) that referred to musical instruments in ancient times. It became colloquially attached to Jewish folk musicians sometime in the Middle Ages. Working under various restrictions in different centuries and cultures, Jewish musicians (klezmorim) developed their own unique style out of a variety of local musical styles. Figuring most prominently are Ottoman Turkish modes and Balkan gypsy and clarinet stylings. The advent of the Chassidic movement in the 1750s stocked the klezmer's pot with an endless supply of melodies and dances based on nigunim (wordless prayer melodies).

What is Klezmer Music? What is Klezmer Music?by Becky Weitzman Klezmer (klez´mær) n. 1 pl. klez´mor·im´ (-mæ reem´) a) [Historical] an itinerant musician who performed at Jewish weddings and holiday celebrations in Eastern Europe b) a musician who performs instrumental Jewish folk music derived from Eastern European folk songs, Hebrew melodies, etc. 2 this instrumental folk musicfrom Webster's NewWorld Dictionary When my non-Jewish friends ask me what is Klezmer, my typical answer is always, "You know - the music from Fiddler on the Roof. News We Don't Have Time To Write About (archive) - Page 16 Margaret Obama hears the People and obeys: The Masses are unhappy with equalization of health insurance, declares all the Masses equally healthy Black Friday is now Red Friday thanks to Obama! Give a thousand monkeys computers and they will eventually type the code for ObamaHealth dot gov, the democrats hope.

Traditional Music and Instruments from the Ukraine - text in English The principle of heterophony allows the principal voice much space for improvisation, continuous variation, and embellishment. It has also an effect on the lyrics, in so far as single words or phrases are lengthened by means of vocalisms or enlarged with additional syllables. This type of choral singing can frequently be found in Central Ukraine, in the steppes and in Eastern Ukraine, where also lyrical ballads are very popular. 1: Cultural Anthropology’s Challenge Cultural anthropology has the potential to change the world. It can bring institutional accountability, facilitating transparency in political and social matters. It encourages “big picture” understandings that allow us to appreciate important problems in deeper and broader ways than we might otherwise.

Melovin: 10 facts about Ukraine's Eurovision 2018 singer Melovin will bring the heat — and his fiery Vidbir 2018 staging — to Eurovision 2018 for Ukraine. Singing the dramatic and pop-tastic tune “Under the Ladder”, he’s hoping to take Eurovision back to Ukraine for the second time in three years. Producers have set the running order for the semi-finals and Melovin will perform last. It’s a telling decision that suggests organisers have faith he’s worthy of closing the show — and will keep people interested as the semi moves into the voting segment. Ukraine has never failed to qualify for the grand final — and that streak is poised to continue this year.