Other Countries (than mine XD) 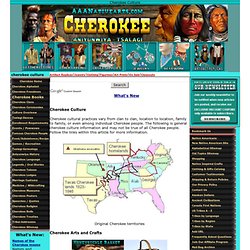 The following is general cherokee culture information and may not be true of all Cherokee people. Follow the links within this article for more information. Original Cherokee territories The Cherokee people are best known for their fine baskets usually made from cane, white oak, hickory bark and honeysuckle. Other traditional Cherokee crafts include the carving of soapstone, primarily for pipes, weaving, creation of elaborate dance masks, pottery, beadwork, and various kinds of metalsmiths. Cherokee traditionally buried their dead in the earth as they believed that the plants fed the animals, the animals and plants fed the people, and the people, at their death, should return to the earth and feed the plants. Cherokee men once wore only a breechcloth and moccasins in warm weather. Japanese Names. Japanese Surnames - Japan Portal. Modern Japanese names (日本人の氏名 nihonjin no shimei) usually consist of a family name (surname), followed by a given name. 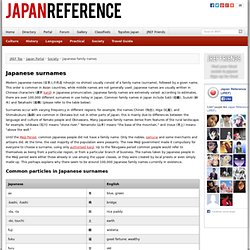 This order is common in Asian countries, while middle names are not generally used. Japanese names are usually written in Chinese characters (漢字 kanji) in Japanese pronunciation. Japanese family names are extremely varied: according to estimates, there are over 100,000 different surnames in use today in Japan. Common family names in Japan include Satō (佐藤), Suzuki (鈴木) and Takahashi (高橋) (please refer to the table below). Surnames occur with varying frequency in different regions; for example, the names Chinen (知念), Higa (比嘉), and Shimabukuro (島袋) are common in Okinawa but not in other parts of Japan; this is mainly due to differences between the language and culture of Yamato people and Okinawans. Until the Meiji Period, common Japanese people did not have a family name. Common particles in Japanese surnames The 30 most common Japanese surnames (2010) Links: Top 100 Chinese Male Names. Japanese Garb. Nanori consisting of a single kanji are either read with the Chinese pronunciation and sounding monosyllabic to Western ears though in actuality two syllables (e.g.; actor Matsudaira Ken); or the Japanese pronunciation utilizing verbal or adjectival forms and are tri-syllabic (e.g.; Takeshi, brave; Tadashi, correct; Shigeru, luxuriant). 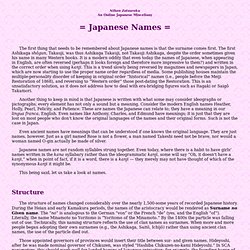 On the whole, such names seem more modern, as they are more common today than in days past. Azana Given names of two kanji, when read in the Chinese fashion (with Japanese version of the Chinese pronunciation), are more formal-sounding, and lend an academic, cultured (and, yes, often clerical) feel to the name. Such names are called azana. Often they are usually indicative of artists, performers, or men of letters. They are not unlike a medieval man named Karl living in Frankfurt using the name Carolus. Frequently the names of plants, things from the arts, seasonal elements, and other “feminine” things were taken for use as women’s names. Tibetan Girls in Traditional Dress Pictures : Misc. Photography.