Young skilled migrants give up dream careers for life in Australia, but numbers are falling. Meeting world leaders including Barrack Obama and Xi Jinping was a regular experience back in Vietnam for Uyen Vu, a former foreign press officer for the Vietnamese government. 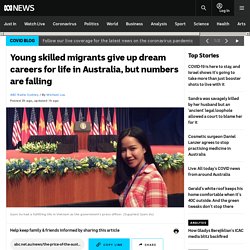 Key points: Former Vietnamese diplomat Uyen Vu helps Australian businesses enter the Vietnamese marketDuy Nong traded an established career in Germany for a peaceful life in Australia Department of Foreign Affairs data shows the number of skilled visa approvals has dropped 38 per cent since 2016. I grew up surrounded by white people — then I moved to Tennant Creek. It sure is different out here in Tennant Creek. 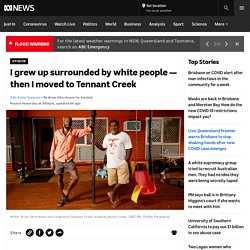 Growing up as I did in Sydney, surrounded by white people, I was taken by surprise when I first moved here – in the middle of Australia there were so many people with black skin like me. For some African migrants, this simple fact makes Tennant Creek feel familiar, a bit like home. Marcel Nkongolo, a Congolese nurse at Tennant Creek Hospital, says the town is even "slightly similar to Africa". "The culture, the weather — it's a little hotter here," he tells RN's Earshot. Jane Ndove, a health policy worker with Zimbabwean roots, spent five hard years living in China as a black woman. Mohammad was placed on a temporary protection visa as a child — now he's seemingly stuck with it for life. Blackbirds: Australia’s hidden slave trade history: The racism that brought Australian South Sea Islanders here, and the racism that tried to send them back.

“We had a slave trade.” You Can't Ask That. Syrians return home after years as unwelcome refugees, but there's little cause for celebration. Updated Sat at 7:42amSat 6 Oct 2018, 7:42am Mohammad Al Arabi's borrowed ute arrives before dawn at Beirut's Burg Hammoud sports stadium. 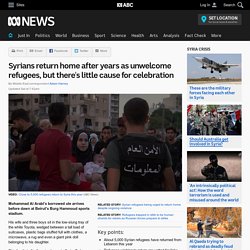 Key points: About 5,000 Syrian refugees have returned from Lebanon this yearRefugees wishing to return are vetted for links with rebelsThe UN does not support the refugees' return to Syria His wife and three boys sit in the low-slung tray of the white Toyota, wedged between a tall load of suitcases, plastic bags stuffed full with clothes, a microwave, a rug and even a giant pink doll belonging to his daughter. This family is finally going home to Syria. "I have all my stuff with me. "I'm leaving because I don't have any work and I have children to feed. " Karen refugees boost regional Victoria's economy, new study finds. Updated about an hour agoTue 25 Sep 2018, 12:21am Resettling refugees from South-East Asia has proven a boon for one regional Victorian economy. 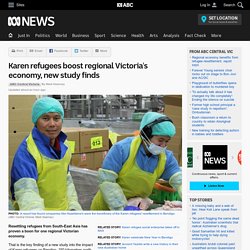 That is the key finding of a new study into the impact of Karen refugees on Bendigo, 150 kilometres north of Melbourne. Karen people are an ethnic minority from Myanmar, tens of thousands of whom live in refugee camps on the country's border with Thailand. Those not born into camps worked as subsistence farmers in small mountain villages in the region. Raising of South Sea Islander flag a step towards recognition for Australia's 'forgotten people' Posted 14 minutes agoWed 29 Aug 2018, 6:57am The South Sea Islander community is celebrating a small but important victory after their flag was raised by Sydney's Inner West Council — the first time it has ever been flown on a government building. 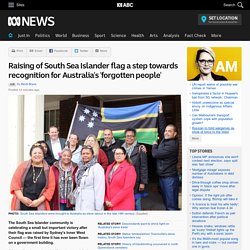 Often calling themselves the "forgotten people" of Australia, they are descendants of Pacific Islanders who were taken to Queensland's sugar plantations in the late 19th century to work as labourers. Advocates are hopeful this small step will raise more awareness of what happened and, one day, lead to a national apology, similar to Kevin Rudd's 2008 speech to the Stolen Generations. Danny Togo, Vice-President of the Australian South Sea Islanders Association, Port Jackson says seeing their flag flying at Petersham Town Hall was a proud moment. Chart of the day: Where do migrants to Australia come from? Posted yesterday at 1:54amMon 20 Aug 2018, 1:54am Asia is Australia's largest source of permanent migrants, according to the latest available figures from the Department of Home Affairs. 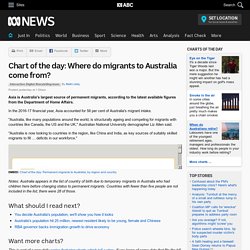 In the 2016-17 financial year, Asia accounted for 56 per cent of Australia's migrant intake. Movies and Films about Refugees and Immigrants on Pinterest.

Seeking Refuge from What?

NGO's in Darwin. Asylum by boat? Not in Australia. Asia: Human Geography. Asia is the largest of the world’s continents, covering approximately 30 percent of the Earth’s land area. 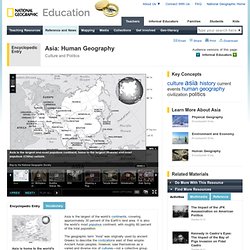 It is also the world’s most populous continent, with roughly 60 percent of the total population. The geographic term “Asia” was originally used by ancient Greeks to describe the civilizations east of their empire. Ancient Asian peoples, however, saw themselves as a varied and diverse mix of cultures—not a collective group. Today, the term “Asia” is used as a cultural concept, while subregion classifications describe the distinct geopolitical identities of the continent. 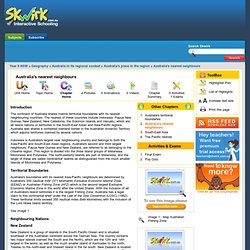 The nearest of these countries include Indonesia, Papua New Guinea, New Zealand, New Caledonia, the Solomon Islands and Vanuatu, which are all island nations or territories in the South-East Asian and Asia-Pacific regions. Australia also shares a contested overland border in the Australian Antarctic Territory which adjoins territories claimed by several nations. Indonesia is Australia's largest near neighbouring country and belongs to both the Asia-Pacific and South-East Asian regions. Australia's second and third largest neighbours, Papua New Guinea and New Zealand, are referred to as belonging to the Oceania region.

Territorial Boundaries See Image 1 Neighbouring Nations New Zealand New Zealand is a group of islands in the South Pacific Ocean and is situated southeast of the Australian continent across the Tasman Sea. See Image 2 Indonesia. FactCheck: have more than 1000 asylum seekers died at sea under Labor? “More than 1000 asylum seekers have perished at sea since Labor relaxed its policies in 2008 - a move it now concedes was a mistake.” - The Australian, 18 July. 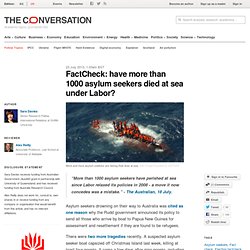 Asylum seekers drowning on their way to Australia was cited as one reason why the Rudd government announced its policy to send all those who arrive by boat to Papua New Guinea for assessment and resettlement if they are found to be refugees. There were two more tragedies recently. A suspected asylum seeker boat capsized off Christmas Island last week, killing at least four people. Barry Jones: asylum is the greatest moral challenge of our time. We are never completely contemporaneous with our present. 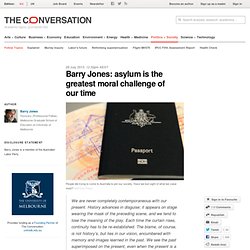 History advances in disguise; it appears on stage wearing the mask of the preceding scene, and we tend to lose the meaning of the play. Each time the curtain rises, continuity has to be re-established. The blame, of course, is not history’s, but lies in our vision, encumbered with memory and images learned in the past. We see the past superimposed on the present, even when the present is a revolution. KNALIJ Global Refugee Populations 1975-2010. CPD-Refugee_Report_Web.

Instead, asylum seekers will be processed in Papua New Guinea. If found to be a refugee, they can be resettled in PNG or wait for resettlement in a third country. The policy has been put into effect immediately and there will be no exceptions for pregnant women, small children or people with severe health problems or disabilities. Whither the Pacific Solution: Rudd’s Hard-line Approach to Asylum Seekers.

By Jack Georgieff Struggling Papua New Guinea will be the destination for many asylum seekers trying to reach Australia. Source: UN Women Asia & the Pacific’s flickr photostream, used under a creative commons license. Upon returning to office a month ago, Australian prime minister Kevin Rudd promised to seek a regional solution to the politically toxic issue of asylum seekers. To do so, he is leaning heavily on a neighbor to the north: Papua New Guinea. SBS - Search results for asia pacific asylum seekers.

CoalitionForAsylumSeekersRefugeesAndDetainees. Bum steer: dog whistling no Pacific solution. Children playing on the beach at Manus Island. Photo: Jason South The unending drama of thousands of people risking, and too often losing, their lives setting sail for Australia in the hope of building better lives is having a deeply corrosive impact on our society, an impact that has been sharpened in the frenzied prelude to this election campaign. For years the issue of ''boat people'' has poisoned our politics, drawing both major parties into a vortex of hardline posturing that has exaggerated the problem, exploited and amplified the mostly irrational anxieties of many ordinary Australians and driven the concoction of ever more costly and unworkable ''solutions''.