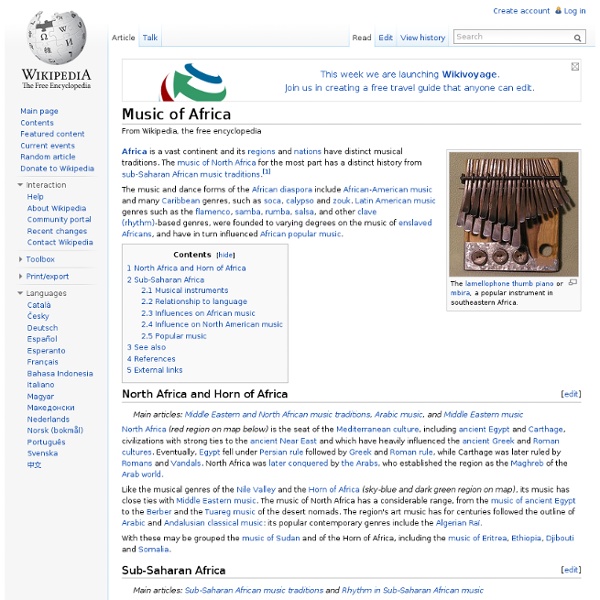 Given the vastness of the continent, the traditional music of Africa is historically ancient, rich, and diverse, with the different regions and nations of Africa having distinct musical traditions. Traditional music in much of the continent is passed down orally (or aurally) and is not written. In Sub-Saharan African music traditions, it also frequently relies heavily on percussion instruments of every variety, including xylophones, drums, and tone-producing instruments such as the mbira or "thumb piano Music by regions[edit] North Africa and the Horn of Africa[edit] With these may be grouped the music of Sudan and of the Horn of Africa, including the music of Eritrea, Ethiopia, Djibouti and Somalia. West, Central, Southeast and South Africa[edit] Geo-political map of Africa divided for ethnomusicological purposes, after Alan P. African traditional music is frequently functional in nature. Musicologically, Sub-Saharan Africa may be divided into four regions:[6] Musical instruments[edit]

Learn Keyboard Notes Edit Article All Keyboards88-Key Keyboards and Pianos Edited by RobinElzibab, Teresa, VC, Adamjh99 and 13 others If you're just learning how to play a keyboard instrument, whether it's a MIDI controller, organ, or an 88-key grand piano, learning the notes on the keyboard is a crucial first step. This article will help you get familiar with how the keys are arranged, what the notes are, and get started on a long and musical road. Ad Steps Method 1 of 2: All Keyboards Method 2 of 2: 88-Key Keyboards and Pianos Keyboard Notes Step 5.360p.mp4Learn Keyboard Notes Step 5.gif1Start at the first key to the left. Tips Memorize all the white and black notes for one octave—C to C. Warnings

untitled Music of Africa Overview of musical traditions in Africa Like the music of Asia, India and the Middle East, it is a highly rhythmic music. The complex rhythmic patterns often involving one rhythm played against another to create a polyrhythm. The most common polyrhythm plays three beats on top of two, like a triplet played against straight notes. Sub-Saharan African music traditions frequently rely on percussion instruments of many varieties, including xylophones, djembes, drums, and tone-producing instruments such as the mbira or "thumb piano. Another distinguishing form of African music is its call-and-response nature: one voice or instrument plays a short melodic phrase, and that phrase is echoed by another voice or instrument. Traditional music in most of the continent is passed down orally (or aurally) and is not written. Music is important to religion in Africa, where rituals and religious ceremonies use music to pass down stories from generation to generation as well as to sing and dance to.

Musical Notation - The Method Behind the Music All music must be written before it can be read, understood, and played by musicians. To do this, a system of notation has been developed that gives musicians the information they need to play music as the composer intended it. Here is a list of topics discussed on this page: The Staff The staff is the basis of written music. It is what the notes are presented on. Clefs This is the treble staff. This is the bass (pronounced 'base' ) staff. This is a C clef. The Grand Staff When the bass and treble clef are combined and connected by a brace (left) and lines, they become the grand staff. Measures The vertical lines on the staff mark the measures. Notes Different pitches are named by letters. Notes Written on the Staff Notes are centered on the lines or in the spaces between the lines. Ledger Lines Ledger lines extend above and below the staff, allowing for higher or lower notes to be shown than would otherwise fit on the staff. Note Durations All notes have length. At the top is a whole note (1).

Rattle (percussion instrument) Rattle from Papua New Guinea, made from leaves, seeds and coconut shell, to be tied around a dancer’s ankle Maracas from Mexico A rattle is a type of percussion instrument which produces a sound when shaken. Rattles are described in the Hornbostel–Sachs system as Shaken Idiophones or Rattles (112.1).[1] Rattles include: Jump up ^ Erich M. von Hornbostel and Curt Sachs, "Classification of Musical Instruments," Translated from the original German by Anthony Baines and Klaus P.

Ladysmith Black Mambazo - The Lion Sleeps Tonight Rattle Hip hop music While often used to refer to rapping, "hip hop" more properly denotes the practice of the entire subculture.[9][10] The term hip hop music is sometimes used synonymously with the term rap music,[2][5] though rapping is not a required component of hip hop music; the genre may also incorporate other elements of hip hop culture, including DJing and scratching, beatboxing, and instrumental tracks.[11][12] Origin of the term Creation of the term hip hop is often credited to Keith Cowboy, rapper with Grandmaster Flash and the Furious Five.[13] However, Lovebug Starski, Keith Cowboy, and DJ Hollywood used the term when the music was still known as disco rap.[14] It is believed that Cowboy created the term while teasing a friend who had just joined the U.S. 1970s Origins 1520 Sedgwick Avenue, the Bronx, a venue used by Kool Herc that is often considered the birthplace of hip hop in 1973[18] DJ Kool Herc, recognized as one of the earliest hip hop artists Introduction of rapping Influence of disco 1980s