African music. History It is widely acknowledged that African music has undergone frequent and decisive changes throughout the centuries. What is termed traditional music today is probably very different from African music in former times. Nor has African music in the past been rigidly linked to specific ethnic groups. The individual musician, his style and creativity, have always played an important role. Kpanda dance. 5 of The Greatest Socially Conscious African Musicians…EVER! - Africa.com. Celtic Regions. This document is still very much a work in progress, so please excuse any shortcomings...and then write and let me know what you would like to see here! 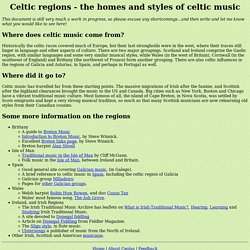 Where does celtic music come from? Historically the celtic races covered much of Europe, but their last strongholds were in the west, where their traces still linger in language and other aspects of culture. There are two major groupings. 2 Hours of Celtic Music. Seven Historic Irish Musicians and Performers. Japanese music - Influence of Tang-dynasty China. Okami [Full Album] - Traditional Japanese Music. Japanese Traditional Music [ Category and Explanation/Sokyoku (Koto Music) ] Toward the end of the 16th century, a priest named Kenjun at the Zendoji Temple in Kurume in Kyushu collected several old koto pieces that had been preserved in Kyushu and made a collection of ten pieces, the heart of a style he named the Chikushi School. 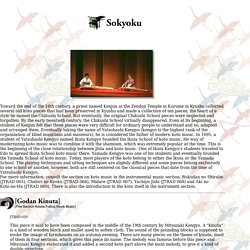 But eventually, the original Chikushi School pieces were neglected and forgotten. By the early twentieth century, the Chikushi School virtually disappeared. Even at its beginning, a student of Kenjun felt that these pieces were very difficult for ordinary people to understand and so, adapted and arranged them. Indonesian Folk Music. Overview Indonesia is home to a wide variety of peoples and cultures that encompasses 17,500 islands, 300 languages, numerous religions, and a wealth of vocal and instrumental styles. 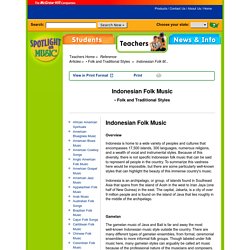 Because of this diversity, there is not specific Indonesian folk music that can be said to represent all people in the country. To summarize this vastness here would be impossible, but there are some particularly well-known styles that can highlight the beauty of this immense country's music. The Gamelan Music Of Indonesia. Indonesian Composer Biographies. Biographies of Indonesian Composers from Bakers Biographical Dictionary of Composers, eighth edition written by Jody Diamond based on field work conducted in Indonesia in 1988-89 © 2001 all rights reserved R.L. 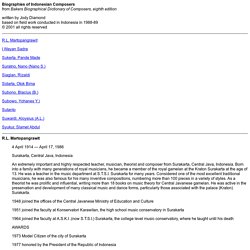 It was inspired by secular melodies, popular dances, 'khazones' (khazanut, Jewish liturgy) as well as by the 'nigunim', the simple and often wordless melodies, intended by the 'Hasidim' (orthodox Jews) for approaching God in a kind of ecstatic communion. In (mutual) contact with Slavic, Greek, Ottoman (Turkish), Gypsy and -later- American jazz musicians, using typical scales, tempo and rhythm changes, slight dissonance and a touch of improvisation, the 'klezmorim' acquired the ability to evoke all kinds of emotions, through a very diversified music. back home "Klezmer: it's not just music - it's a way of life! " (Hankus Netsky) A klezmer kapelye (~1910) The Best Little Klezmer Band In Texas - What Is Klezmer Music?

About Klezmer Music KLEZMER is the Yiddish pronunciation of the Hebrew KLEY-Z'MER, (lit.; vessel-of-song)-"musical instrument"-which, in the East European context, came to refer to the musicians themselves. 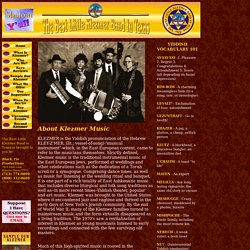 Strictly defined, Klezmer music is the traditional instrumental music of the East European Jews, performed at weddings and other celebrations such as the dedication of a Torah scroll or a synagogue. Comprising dance tunes, as well as music for listening at the wedding ritual and banquet, it is one part of a rich totality of East Ashkenazic music that includes diverse liturgical and folk song traditions as well as--in more recent times--Yiddish theater, popular and art music. Klezmer was brought to the United States where it encountered jazz and ragtime and thrived in the early days of New York's Jewish community. 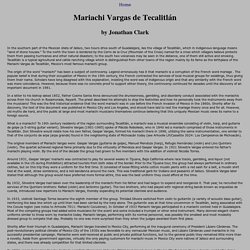 To the north the town is bordered by the Cerro de la Cruz (Mountain of the Cross) named for a cross which villagers believe protects them from passing hurricanes and other natural disasters; to the south two volcanoes may be seen in the distance, one of them still active and smoking. Tecalitlán is a typical agricultural and cattle ranching village which is distinguished from other towns of the region mainly by its fame as the birthplace of the Mariachi Vargas de Tecalitlán, Mexico’s most famous mariachi group. The origin of the word “mariachi” has been a subject of controversy.

Legend erroneously has it that mariachi is a corruption of the French word mariage . What is a mariachi?