Listen to English around the World. 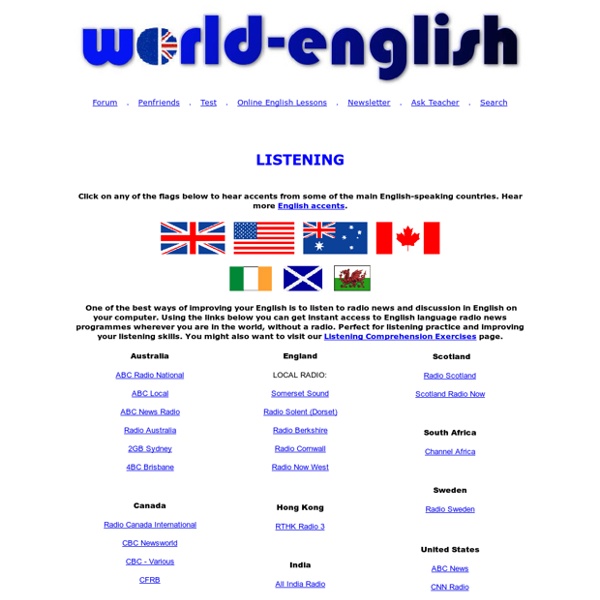 Click on any of the flags below to hear accents from some of the main English-speaking countries. Hear more English accents. One of the best ways of improving your English is to listen to radio news and discussion in English on your computer. Using the links below you can get instant access to English language radio news programmes wherever you are in the world, without a radio. Perfect for listening practice and improving your listening skills. You might also want to visit our Listening Comprehension Exercises page. Listen to the Bible in MP3 format Listen to film soundclips

Learn 46 Languages Online for Free Open Culture Advertisement Get FREE Audio Books from Audible.com and Audiobooks.com How to learn languages for free? This collection features lessons in 48 languages, including Spanish, French, English, Mandarin, Italian, Russian and more. Download audio lessons to your computer or mp3 player and you’re good to go.

Extra pronunciation activities for listening to English and learning English listen and learn Pronunciation activities for learners of English Pronunciation The video activities on this page help to improve your listening and your speaking skills. Members can download these videos. Some also have audio versions and worksheets. Differences Between American and British English By Kenneth Beare While there are certainly many more varieties of English, American English and British English are the two varieties that are taught in most ESL/EFL programs. Generally, it is agreed that no one version is "correct" however, there are certainly preferences in use. The three major differences between between American and British English are: Experimenting with English (Part 2) – Activities for learners to do outside the classroom [26 and counting!] In my blog post Experimenting with English: scaffolding learner autonomy, I discussed how I approached helping my learners to use English outside the classroom, drawing on learner autonomy theory and methodology (e.g. Benson, 2011; Oxford, 2003; Smith 2003). Central to that project, alongside the very important element of discussion, was a handout I created for my learners. Here is a screenshot of a sample page, taken from the listening section: Sample page from my Experimenting with English activities handout, listening section. As you can see, the handout consists of a series of activities for learners to try, with space for them to record when they tried it and what they thought of it.

Listen to English and learn English with podcasts in English ►Go to travelogues Follow the pie team on their travels and learn English along the way ►Go to pie plus Our monthly magazine with news, videos, information worksheets and our monthly competition. Take a look! ►Go to extras Is the UK the same as Britain, Great Britain and England? The UK is situated north-west of the European continent between the Atlantic Ocean and the North Sea. It has a total land area of 244,100 square kilometres, of which nearly 99% is land and the remainder inland water. From north to south it is about 1,000 kilometres long.

The School System A child may begin schooling with grade 0 (also called reception, or grade-R) from the age of four. Grades 1 to 9 are compulsory and classified as General Education and Training (GET). Grades 11 and 12, Further Education and Training (FET), are non-compulsory; qualification at this level with a matriculation certificate is required to enter tertiary education. Some schools offer a post-matric/sixth-form level which allows students to sit for A-level exams. The three-tier system of education is as follows: English-speaking countries Have you ever wondered why you have to learn English at school? Did you know that the world speaks English? Do you know how many countries in the world have English as an official language? Recipes for the EFL classroom Not sure what to do with a listening text coming up soon in the unit? Don’t like the comprehension questions in the book? Want some ideas to liven it up? Pre-listening

Language In Use It is great to show and offer students many examples of English language in use. Meaning, students appreciate that there are many ways to say the same thing and like to see the "nuance" of the English language. Here are some images showing different ways / expressions to communicate a similar thing. Might be handy. Also, view as a slideshow or you can purchase and edit in ppt. If interested in this kind of approach, you might be interested in my ebook "Get TALKing" which has 28 lessons all based around language chunks.

HIS or HE´S? Choose the right option. 1. This is John. a good student. marks are great. All About South Africa Jun 08, 2010 Seeing as the 2010 FIFA World Cup happened in South Africa, we thought it’d be cool to learn a bit more about the beautiful country, which has definitely been through its fair share of tough times. South African Kids Of all the countries on the continent of Africa, South Africa’s the most diverse in terms of its territory. It ranges from rolling hills to wide open savannah to the Kalahari Desert to the high peaks of the Drakensberg Mountains. Lots of people visit South Africa to go on safari, though, since it’s got two of the world’s most famous wildlife reserves: the Kruger and the Kalahari Gemsbok National Parks.