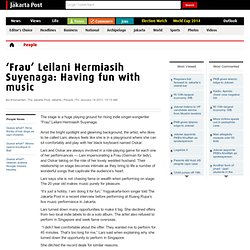 Amid the bright spotlight and gleaming background, the artist, who likes to be called Lani, always feels like she is in a playground where she can sit comfortably and play with her black keyboard named Oskar. Lani and Oskar are always involved in a role-playing game for each one of her performances — Lani impersonating a Frau (German for lady), and Oskar taking on the role of her lovely wedded husband. Their relationship on stage becomes intimate as they bring to life a number of wonderful songs that captivate the audience’s heart. Lani says she is not chasing fame or wealth when performing on stage. The 20 year old makes music purely for pleasure. “It’s just a hobby. Lani turned down many opportunities to make it big. “I didn’t feel comfortable about the offer.

She ditched the record deals for similar reasons. Playing music, for Lani, is supposed to be fun. But Frau didn’t stop there. Frau - Something More. Instruments played in Japanese Music. Perfume - girlband - jpop. In 2000, three young girls formed a group together in their hometown of Hiroshima. 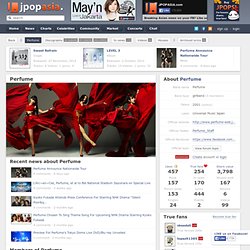 They were Nishiwaki Ayaka (A~chan), Kashino Yuka (Kashiyuka), and Kawashima Yuuka (Kawayuka). Because all three members had the Japanese character for fragrance in their names (香), they named the group Perfume. However, before the group could even debut, Kawashima decided to pull out of the project and pursue her studies. Perfume decided to continue on as a duo but Nishiwaki's mother commented on the lack of power that a two-member group has. Nishiwaki set out to find a replacement, and Oomoto Ayano (Nocchi) joined as the third member. In 2001, Perfume debuted in Hiroshima with the single "OMAJINAI★Perori". In 2003, following their graduation from the Actors School in Hiroshima, the trio moved to Tokyo. In Tokyo, they also met someone who would become a crucial aspect of their success, capsule's Nakata Yasutaka who would become their main producer. 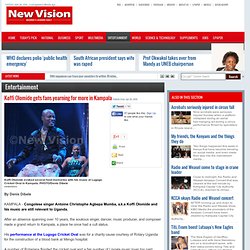 After an absence spanning over 10 years, the soukous singer, dancer, music producer, and composer made a grand return to Kampala, a place he once had a cult status. His performance at the Lugogo Cricket Oval was for a charity cause courtesy of Rotary Uganda for the construction of a blood bank at Mengo hospital. A number of Rotarians flooded the cricket oval and a fair number of Lingala music lover too paid allegiance and money to get the feel of the soukous maestro. With local sensations Jamal, Grace Nakimera and Rema as some of the curtain raisers, Jose Chameleone was evidently absent on the list of performers before Olomide took to the stage.

Musician Alvin Law from Canada, who has no arms, came on stage shortly before Kofi, and he played the drum using his feet to the amazement of many revelers. Then came the moment everyone was waiting for. Congo - Koffi Olomide in HD - Copyright : Sonima Music - L'autre La.