What is Celtic music? 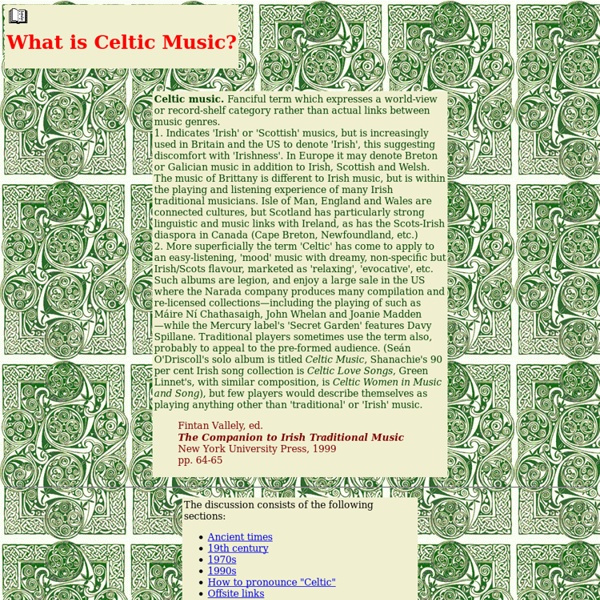 Articles: Africa 100: The Indestructible Beat Note: This article was originally published in April 2005. It was created at a time when African music was on the cusp of becoming an increasingly large part of the Western pop culture landscape. Portions of it have been updated to reflect changes in the past five years-- particularly changes in the number of compilations and labels available. List of Best Celtic Musicians & Groups While there are tons of fantastic Celtic artists, some are just better than others. This list is designed to let the fans of Celtic music separate the absolute best Celtic bands and artists from all of the rest. Celtic music is a broad genre that includes any music inspired by the folk traditions of Ireland, Scotland, Wales, and the other Celtic nations. From traditional bands honoring the history of the genre, to punk bands inspired by the rhythm and songs of the genre, a wide variety of acts fall under the banner of Celtic music. The Pogues and Gaelic Storm are classic examples of the genre, but are they the top Celtic music bands of all time?

Music of Indonesia The music of Indonesia demonstrates its cultural diversity, the local musical creativity, as well as subsequent foreign musical influences that shaped contemporary music scenes of Indonesia. Nearly thousands of Indonesian islands having its own cultural and artistic history and character.[1] This results in hundreds of different forms of music, which often accompanies dance and theatre. Musical instruments[edit] Balinese gamelan performance. History of Celtic Music Celtic music is defined as music that originates from the countries of Ireland, Scotland and Wales. The people who live in these locations are known as Celts, which is how the music became known as Celtic music. Celtic music is best described as a type of folk music with a distinctive music and lyrics. And, today Celtic music is played and heard not only in Ireland, Scotland and Wales, but also on a worldwide stage. Celtic music has been traced back to the 1600's and is still a popular musical genre today.

Traditional Korean musical instruments Traditional Korean musical instruments comprise a wide range of string, wind, and percussion instruments. String[edit] Korean string instruments include those that are plucked, bowed, and struck. Most Korean string instruments use silk strings, except as noted. What is celtic music? The term 'celtic music' is a rather loose one; for the purpose of Ceolas, it covers the traditional music of the celtic countries - Ireland, Scotland, Wales, Brittany (in France), Galicia (in Spain) and areas which have come under their influence, such as the US and the maritime provinces of Canada, as well as some newer music based on the tradition from these countries. The term is sometimes controversial. For starters, the Celts as an identifiable race are long gone, there are strong differences between traditional music in the different countries, and many of the similarities are due to more recent influences. There is also the notion that 'celtic' implies celtic mysticism and a particular influence in new-age music which has little to do with traditional music. In general, the strongest connections are between Irish and Scottish tradition and it is on these that Ceolas concentrates.

Celtic music Rapalje performing in 2010 Description and definition[edit] An 18th century depiction of an ancient Druid playing the harp These following melodic practices may be used[4] widely across the different variants of Celtic Music: It is common for the melodic line to move up and down the primary chords in many Celtic songs. There are a number of possible reasons for this: Melodic variation can be easily introduced.