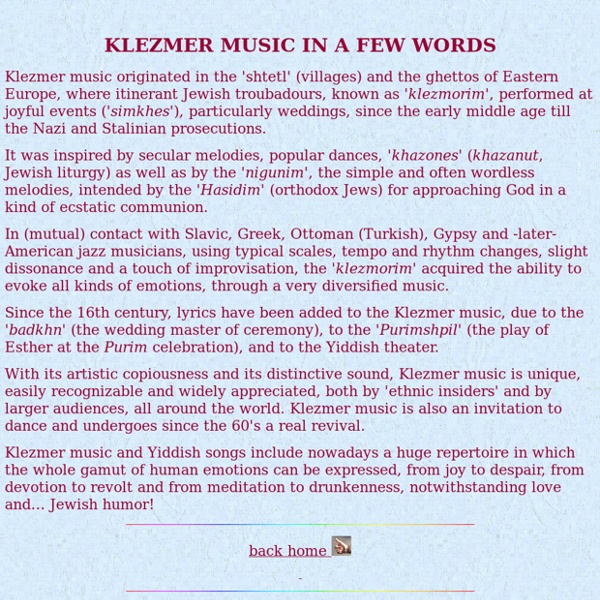 Klezmer music originated in the 'shtetl' (villages) and the ghettos of Eastern Europe, where itinerant Jewish troubadours, known as 'klezmorim', performed at joyful events ('simkhes'), particularly weddings, since the early middle age till the Nazi and Stalinian prosecutions. It was inspired by secular melodies, popular dances, 'khazones' (khazanut, Jewish liturgy) as well as by the 'nigunim', the simple and often wordless melodies, intended by the 'Hasidim' (orthodox Jews) for approaching God in a kind of ecstatic communion. In (mutual) contact with Slavic, Greek, Ottoman (Turkish), Gypsy and -later- American jazz musicians, using typical scales, tempo and rhythm changes, slight dissonance and a touch of improvisation, the 'klezmorim' acquired the ability to evoke all kinds of emotions, through a very diversified music. back home "Klezmer: it's not just music - it's a way of life!" (Hankus Netsky) A klezmer kapelye (~1910) Attention, please: Pronounce 'kleZmer' and not 'kleTzmer'! Feidman

Traditional Irish music Traditional Irish music is a full body experience: the upbeat tempos compel you to dance a jig, clap your hands and join in. And that's what trad music is all about, joining in and having the craic (fun). Knowing your seisúns from your céilís First things first, learn the lingo. What Instruments Are Played in Klezmer Music? Klezmer music is a Yiddish folk music that developed during the renaissance in Eastern Europe. The style features mainly acoustic instruments, though modern American takes on the style incorporate drums and vocals into the blueprint, as well. Because of its origins, klezmer is still considered a form of Jewish music, and is frequently heard at Jewish weddings and other functions. Violin The violin sits at the heart of klezmer music. Musicians capitalize on the stringed instrument&#039;s highly expressive qualities.

What is Klezmer Music? - The Klezmer Fiddle In short, "Klezmer" is the name now given to the traditional Jewish wedding music, which once flowered for centuries in the Shtetls of Eastern Europe, prior to the virtual destruction of Eastern European Jewish culture in the Holocaust... The actual word "Klezmer" actually is derived from the Yiddish phrase "Vessels of Song" - it therefore refers to the musicians who once played this beautiful music in the lost Shtetls of Eastern Europe. Above all the musical styles which influenced the traditional Klezmer musicians of Eastern Europe, the Romanian influence seems to be the strongest and most enduring. This fact is reflected in the dance forms found throughout the entire surviving Klezmer music repertoire, e.g. Horas, Doinas, and Bulgars etc.

klezmer music Klezmer music, genre of music derived from and built upon eastern European music in the Jewish tradition. The common usage of the term developed about 1980; historically, a klezmer (plural: klezmorim or klezmers) was a male professional instrumental musician, usually Jewish, who played in a band hired for special occasions in eastern European communities. In the 21st century, klezmer music can be heard wherever Jews have settled. The Yiddish word klezmer derives from two Hebrew roots: klei (“vessel” or “instrument”) and zemer (“song”).

The history and origins of traditional Irish music Trace the evolution of Irish music. Ireland may produce big names such as U2 and the Script that tour popular music all over the world but we also know how to keep in touch with our traditions. Fleadh Cheoil na hÉireann (the Music Festival of Ireland), the world’s biggest traditional Irish music celebration, still sees over 400,000 attendees each year with dozens of nationalities arriving in Ireland to celebrate our 2,000 year old traditions.

japan Article MT088 An overview of solo and ensemble development [Introduction] [Aesthetics] [Teaching] [Historical Background] [The Biwa] [The Koto] [The Shakuhachi] [The Shamisen] [Ensemble Music] [Conclusion] [CDs of Japanese Music] [References] Traditional Music of Japan — Encyclopedia of Japan Ancient Japanese MusicAlmost nothing is known about music in Japan's prehistory, through the Jomon and Yayoi periods, but there are ritual figures of musicians, suggesting the early importance of music. The late Yayoi period is marked by the building of immense tombs, and there were probably many powerful clans that gradually culminated in the dominance of the Yamato clan. The state that they built used language, religion and legal systems from the Asian continent and resulted in the high development of the imperial court as a political and cultural center in the Nara (645 - 710) and Heian (794 - 1185) periods. Even when the political power of the imperial court declined after this time, the court retained its cultural traditions, many which continue to this day.

Japanese Traditional Music Traditional Japanese music usually refers to Japan's historical folk music. One of the defining characteristics of traditional Japanese music is its sparse rhythm. Regular chords are also absent. It is impossible for a person to beat time to the music. Celtic Music Instruments From the thump of the Bodhrán to the airy rasp of the wooden flute, celtic music is known by its instruments. Here's an introduction to the main players, with links to more information, for players and afficionados. Fiddle

African music History It is widely acknowledged that African music has undergone frequent and decisive changes throughout the centuries. What is termed traditional music today is probably very different from African music in former times.