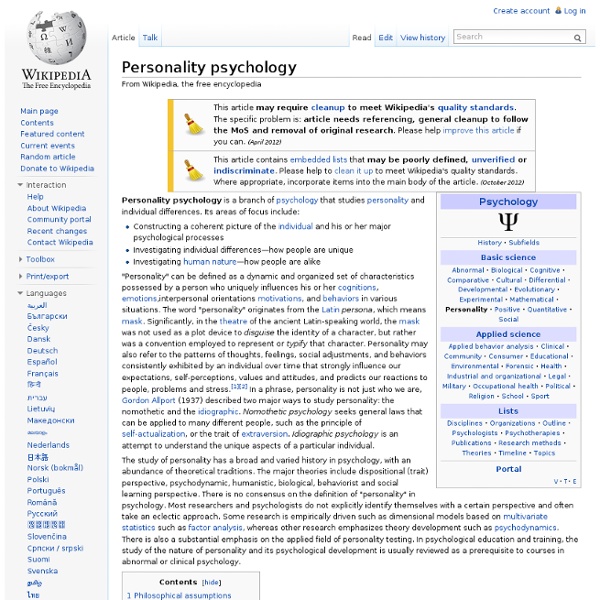 Personality psychology is a branch of psychology that studies personality and its variation between individuals. Its areas of focus include: Construction of a coherent picture of the individual and his or her major psychological processesInvestigation of individual psychological differencesInvestigation of human nature and psychological similarities between individuals "Personality" is a dynamic and organized set of characteristics possessed by a person that uniquely influences his or her cognitions, emotions, motivations, and behaviors in various situations. The word "personality" originates from the Latin persona, which means mask. In the theatre of the ancient Latin-speaking world, the mask was not used as a plot device to disguise the identity of a character, but instead was a convention employed to represent or typify that character. The study of personality has a broad and varied history in psychology with an abundance of theoretical traditions. Philosophical assumptions[edit] 1. 2.

Can People’s Personalities Change? Has one of the oldest questions about personality been answered? For many years personality psychologists gave the same answer as any pessimist: no, people’s personalities don’t change. This was even more true once they got to 30-years-old. Quality of life Well-being or welfare is a general term for the condition of an individual or group, for example their social, economic, psychological, spiritual or medical state; high well-being means that, in some sense, the individual or group's experience is positive, while low well-being is associated with negative happenings. In economics, the term is used for one or more quantitative measures intended to assess the quality of life of a group, for example, in the capabilities approach and the economics of happiness. Like the related cognate terms 'wealth' and 'welfare', economics sources may contrast the state with its opposite.[1] The study of well-being is divided into subjective well-being and objective well-being. Background[edit]

Trait theory In psychology , trait theory is an approach to the study of human personality . Trait theorists are primarily interested in the measurement of traits , which can be defined as habitual patterns of behavior, thought, and emotion. [ 1 ] According to this perspective, traits are relatively stable over time, differ across individuals (e.g. some people are outgoing whereas others are shy), and influence behavior. Gordon Allport was an early pioneer in the study of traits, which he sometimes referred to as dispositions. In his approach, central traits are basic to an individual's personality, whereas secondary traits are more peripheral. Common traits are those recognized within a culture and may vary between cultures.

Five Temperaments Five temperaments is a theory in psychology, that expands upon the Four Temperaments proposed in ancient medical theory. The development of a theory of five temperaments begins with the Two-factor models of personality and the work of the late William Schutz, and his FIRO-B program. It is a measure of interpersonal relations orientations that calculates a person's behavior patterns based on the scoring of a questionnaire. Although FIRO-B does not speak in terms of "temperament", this system of analysis graded questionnaires on two scales in three dimensions of interpersonal relations. When paired with temperament theory, a measurement of five temperaments resulted.[1] History and the ancient four temperaments[edit]

4 Personality Traits That Make You an Effective Leader What makes a good leader? Which personality traits do the best trailblazers share? Every organization has its own benchmarks for determining who would make the best head of its teams, but are those qualities really all that different? Positive psychology To Martin Seligman, psychology (particularly its positive branch) can investigate and promote realistic ways of fostering more joy in individuals and communities. Positive psychology is a recent branch of psychology whose purpose was summed up in 1998 by Martin Seligman and Mihaly Csikszentmihalyi: "We believe that a psychology of positive human functioning will arise, which achieves a scientific understanding and effective interventions to build thriving individuals, families, and communities."[1] Positive psychologists seek "to find and nurture genius and talent" and "to make normal life more fulfilling",[2] rather than merely treating mental illness. Positive psychology is primarily concerned with using the psychological theory, research and intervention techniques to understand the positive, adaptive, creative and emotionally fulfilling aspects of human behavior.[3] Overview[edit]

16 Personality Factors The Sixteen Personality Factor Questionnaire (or 16PF),[1] is a multiple-choice personality questionnaire which was developed over several decades of research by Raymond B. Cattell, Maurice Tatsuoka and Herbert Eber. Beginning in the 1940s, Cattell used the new techniques of factor analysis (based on the correlation coefficient) in an attempt to try to discover and measure the source traits of human personality (Cattell, 1946)(Nevid, 2009).[2][3]

Psychoanalysis Psychoanalysis is a set of psychological and psychotherapeutic theories and associated techniques, originally popularized by Austrian physician Sigmund Freud and stemming partly from the clinical work of Josef Breuer and others. Since then, psychoanalysis has expanded and been revised, reformed and developed in different directions. This was initially by Freud's colleagues and students, such as Alfred Adler and Carl Gustav Jung who went on to develop their own ideas independently from Freud. Phenomenal field theory Description[edit] According to the authors, motivation is "the basic need of everyone to preserve and enhance the phenomenal self, and the characteristics of all parts of the field are governed by this need". Psychopathology[edit] Psychopathology is caused by a threat, which is the awareness of a menace to the phenomenal self. If the person reacts appropriately to the threat, mental health is preserved. If not, the threat leads to defenses, neurotic and psychotic symptoms, and even criminal behavior.

Life satisfaction Life satisfaction and personality[edit] Life satisfaction can reflect experiences that have affected a person in a positive way. These experiences have the ability to motivate people to pursue and reach their goals.[1] There are two emotions that may affect how people perceive their lives. Hope and optimism both consist of cognitive processes that are usually oriented towards the reaching of goals and the perception of those goals.