Dan Ariely: Are we in control of our own decisions? 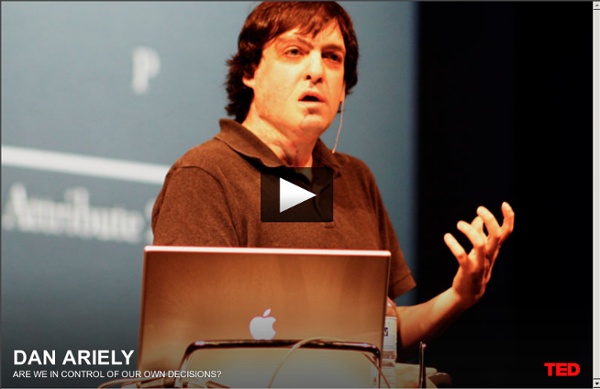 Clips for Class Defining Personality Prickles & Goo: Alan Watts, South Park The creators of South Park, Trey Parker and Matt Stone, created a cartoon to a voice-over of the philosopher Alan Watts. 20 mental barriers you should let go of photo by admitchell08 You are in an imaginary hot air balloon. It’s just you and all of your belongings in the wicker basket. Something went wrong and you are losing altitude fast. You will hit the ground in less than ten minutes if you don’t come up with something quick. The only immediate solution is to get rid of excess weight and throw off at least half of your belongings.

20 Must-See Business TED Talks Every year, today’s greatest thinkers gather at various TED (Technology Entertainment and Design) conferences around the world. Their talks, which you can find on TED’s website, are often insightful, educational, and fascinating. As a TED junkie, I decided to compile 20 of the best business talks in the conference’s history. Each talk offers insights either into a business leader’s mind, or into concepts that will change the way you think about business and the economy. (If you have any favorites not included on this list, please mention them in the comments below.) Signs and Symptoms of ADHD It is normal for children to have trouble focusing and behaving at one time or another. However, children with ADHD do not just grow out of these behaviors. The symptoms continue and can cause difficulty at school, at home, or with friends. A child with ADHD might:

Top Ten Psychology Videos Cognitive to clinical to social, the many applications of psychology reveal profound thoughts, human frailties and strengths. These are some of the best results, framed in video players. 1. An Unquiet Mind: Personal Reflections on Manic-Depressive Illness. Kay Redfield Jamison doesn’t just suffer from bipolar disorder, she literally wrote the book. She co-authored the comprehensive textbook Manic-Depressive Illness: Bipolar Disorders and Recurrent Depression while doing research as a Professor of Psychiatry at Johns Hopkins.

Forget Stress Post written by Leo Babauta. Follow me on Twitter. The prevailing way of living in our Western societies is to plan out our lives, both for the long term and on a day-to-day basis. We have planners and digital calendars that map out our lives, sometimes to the minute. Parataxic distortion Parataxic distortion is a psychiatric term first used by Harry S. Sullivan to describe the inclination to skew perceptions of others based on fantasy. The "distortion" is a faulty perception of others, based not on actual experience with the other individual, but on a projected fantasy personality attributed to the individual. For example, when one falls in love, an image of another person as the “perfect match” or “soul mate” can be created when in reality, the other person may not live up to these expectations or embody the imagined traits at all. The fantasy personality is created in part from past experiences and from expectations as to how the person 'should be', and is formulated in response to emotional stress. This stress can originate from the formation of a new relationship, or from cognitive dissonance required to maintain an existing relationship.

Why Procrastinators Procrastinate PDF: We made a fancy PDF of this post for printing and offline viewing. Buy it here. (Or see a preview.) pro-cras-ti-na-tion |prəˌkrastəˈnāSHən, prō-| noun the action of delaying or postponing something: your first tip is to avoid procrastination. Top 10 Unethical Psychological Experiments - Top 10 Lists Humans Psychology is a relatively new science which gained popularity in the early 20th century with Wilhelm Wundt. In the zeal to learn about the human thought process and behavior, many early psychiatrists went too far with their experimentations, leading to stringent ethics codes and standards. Though these are highly unethical experiments, it should be mentioned that they did pave the way to induct our current ethical standards of experiments, and that should be seen as a positive. There is some crossover on this list with the Top 10 Evil Human Experiments. Three items from that list are reproduced here (items 8, 9, and 10) for the sake of completeness.

Mental Floss: Why Do We Knock on Wood? Reader Dante wrote in to ask, “Why is knocking on wood good luck?” Traditionally, when you speak of your own good fortune, you follow up with a quick knock on a piece of wood to keep your luck from going bad. More recently, simply saying the phrase “knock on wood”—or “touch wood” in the UK—has replaced actually knocking. Where’d all this come from? Before Christianity and Islam came around to spoil the party with their rules about idolatry, many pagan groups and other cultures—from Ireland to India to elsewhere in the world—worshipped or mythologized trees. Some peoples used trees as oracles, some incorporated them into worship rituals and some, like the ancient Celts, regarded them as the homes of certain spirits and gods.

Why the #$%! Do We Swear? For Pain Relief Bad language could be good for you, a new study shows. For the first time, psychologists have found that swearing may serve an important function in relieving pain. The study, published today in the journal NeuroReport, measured how long college students could keep their hands immersed in cold water. 15 Things That Emotionally Strong People Don't Do There is a particular aspect of mental strength that is the deciding factor of whether or not you will have a good life. There are many levels to mental strength and all are needed to be successful and happy. The one particular area of mental strength that has the greatest impact is that of emotional strength. Emotions are, of course, a part of our psyche, yet nevertheless, can be distinguished from the remainder of mental qualities because they most directly influence our physical body. They affect the way our body functions and they drive every single one of our actions.

How to Detect Lies - body language, reactions, speech patterns Interesting Info -> Lying Index -> How to Detect Lies Become a Human Lie Detector (Part 1) Warning: sometimes ignorance is bliss. After gaining this knowledge, you may be hurt when it is obvious that someone is lying to you. The following deception detection techniques are used by police, forensic psychologists, security experts and other investigators. Introduction to Detecting Lies: Psychological ("personality") Types Psychological ("personality") Types According to Jung's theory of Psychological Types we are all different in fundamental ways. One's ability to process different information is limited by their particular type. These types are sixteen. People can be either Extroverts or Introverts, depending on the direction of their activity ; Thinking, Feeling, Sensing, Intuitive, according to their own information pathways; Judging or Perceiving, depending on the method in which they process received information. Extroverts vs.