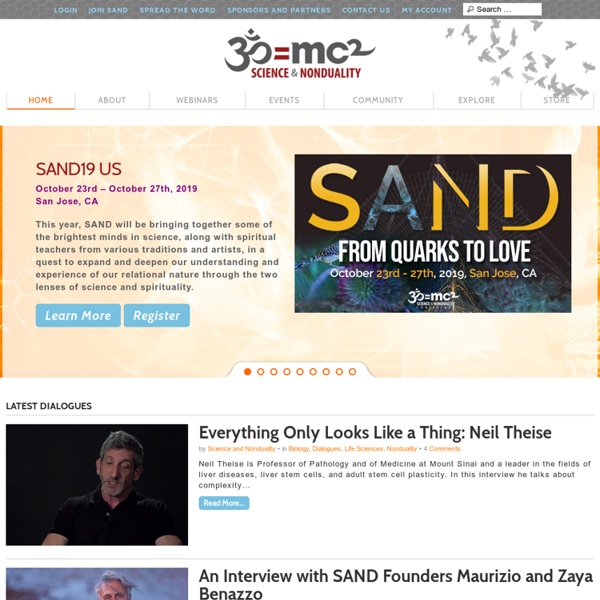 Stillness Speaks www.nonduality.com Perhaps the most mature and clear resource for information on Gurus, authors, reviews and announcements tracking what is happening in nonduality and advaita. Run by Jerry Katz www.francislucille.com My Friend, My Teacher "All Effort is Ignorance" "Absolutely nothing is personal" www.pamelasatsang.com The Queen of Heart Fire and brimstone - Wikipedia Fire and brimstone (or, alternatively, brimstone and fire, translated from the Hebrew גפרית ואש) is an idiomatic expression of signs of God's wrath in the Hebrew Bible (Old Testament) and the New Testament. In the Bible, they often appear in reference to the fate of the unfaithful. "Brimstone", the archaic name for sulfur,[1] evokes the acrid odor of volcanic activity. The term is also used, sometimes pejoratively, to describe a style of Christian preaching that uses vivid descriptions of judgment and eternal damnation to encourage repentance. Biblical references[edit] The King James translation of the Bible often renders passages about fiery torments with the phrase "fire and brimstone".

The Aletheon: The Truth Book of Avatar Adi Da [After the Ruchira Dham Event of April 12, 2000,] My Divine Avataric Self-Revelation-Word Became a completely different kind of Utterance.Most essentially, My Divine Avataric Self-Revelation-Word has Become The Aletheon.— Avatar Adi Da Samraj The Aletheon During the final two years of a Lifetime that had been utterly devoted to the Communication of Truth, Avatar Adi Da created His supreme Scripture — a book of oceanic depth and magnitude. Day after day, month after month, Avatar Adi Da sustained a vast flow of spontaneous writing — moved by His indefatigable Impulse to "say everything" to everyone. In keeping with the unique and profound purpose of this final book, Avatar Adi Da eventually chose to name it The Aletheon (pronounced "a-LAY-thee-on"). The title was His own coinage, based on the ancient Greek word for "Truth" — "Aletheia".

Can you explain why there is “no more sea” in Revelation 21:1? Most students who approach the book of Revelation from the normal or literal method of interpretation understand the words following the statement about the new heaven and new earth, “and there is no longer any sea” to simply mean that because of the changes in atmospheric and human conditions will be so different water as we know it today will not be needed. The term “sea” is the Greek “thalassa” which is used of all forms of water—the oceans, lakes, etc. There will be a river of water (22:1f) that flows through the New Jerusalem, but this is the only other source of water that is mentioned. This may be because there is some kind of relationship between God’s judgment on demon spirits and the oceans. This may be (note I said, “may be”) indicated by a couple of things:

Nirvikalpa "The personal needs a base, a body to identify oneself with, just as a colour needs a surface to appear on. The seeing of the colour is independent of the colour - it is the same whatever the colour. One needs an eye to see a colour.  Life Without a Centre What exactly is Life Without A Centre? Life Without A Centre is about the non-separation (‘nonduality’) between you and your world. It is about the origin of suffering, and the discovery of freedom within that very suffering. It is about the ways in which we try to run away from uncomfortable and painful experiences, and the possibility of discovering ease and relief right in the midst of those experiences. It is about seeking, and the end of seeking. Nontheistic religions religion can be defined as a relatively-bounded system of beliefs, symbols and practices that addresses the nature of existence, and in which communion with others and Otherness is lived as if it both takes in and spiritually transcends socially-grounded ontologies of time, space, embodiment and knowing.[2] Buddhism[edit] Existence of gods[edit]