What is Karma? - Your Fate is Never Truly Set. You can never escape from your karma. 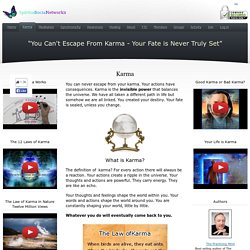 Your actions have consequences. Karma is the invisible power that balances the universe. We have all taken a different path in life but somehow we are all linked. You created your destiny. Your fate is sealed, unless you change. What is Karma? The definition of karma? Your thoughts and feelings shape the world within you. Whatever you do will eventually come back to you. Karma Buddhism Karma is a Buddhist term which comes from Sanskrit and relates to fate, effect and action.You alone are responsible for your actions.

It is the law of cause and effect, an unbreakable law of the cosmos. Some Secrets Echo through Time Your world today is just a reflection of your past. The Invisible Factor. Conflict Resolution Skills: Turning Conflicts into Opportunities. Understanding conflict in relationships Conflict arises from differences, both large and small. 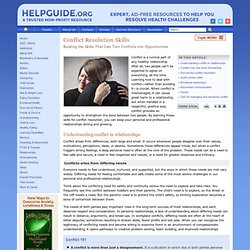 It occurs whenever people disagree over their values, motivations, perceptions, ideas, or desires. Sometimes these differences appear trivial, but when a conflict triggers strong feelings, a deep personal need is often at the core of the problem. These needs can be a need to feel safe and secure, a need to feel respected and valued, or a need for greater closeness and intimacy. Conflicts arise from differing needs Everyone needs to feel understood, nurtured, and supported, but the ways in which these needs are met vary widely. Think about the conflicting need for safety and continuity versus the need to explore and take risks. 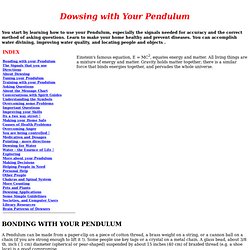 Learn to make your home healthy and prevent diseases. Meditating with Crystals, Crystal Meditation. Practising meditation can be extremely beneficial. 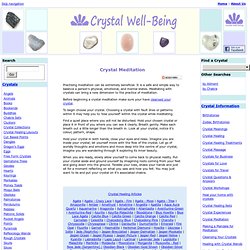 It is a safe and simple way to balance a person's physical, emotional, and mental states. Meditating with crystals can bring a new dimension to the practice of meditation. Before beginning a crystal meditation make sure your have cleansed your crystal. To begin choose your crystal. Choosing a crystal with fault lines or patterns within it may help you to 'lose yourself' within the crystal while meditating. How to Eat Healthy - Superfoods and Healthy Recipes. Elephants - White Elephants. Elephants The elephants (Elephantidae) are a family in the order Proboscidea in the class Mammalia. 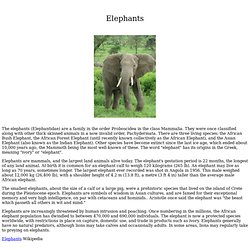 They were once classified along with other thick skinned animals in a now invalid order, Pachydermata. There are three living species: the African Bush Elephant, the African Forest Elephant (until recently known collectively as the African Elephant), and the Asian Elephant (also known as the Indian Elephant). Other species have become extinct since the last ice age, which ended about 10,000 years ago, the Mammoth being the most well-known of these. The word "elephant" has its origins in the Greek, meaning "ivory" or "elephant". Elephants are mammals, and the largest land animals alive today.

The smallest elephants, about the size of a calf or a large pig, were a prehistoric species that lived on the island of Crete during the Pleistocene epoch. Elephants are increasingly threatened by human intrusion and poaching. Elephants Wikipedia Elephant Symbolism White Elephants In the News ... ShareThis. Astral Projection. Astral Projection Reality is created by thought projection (consciousness) into the physical gird. There are 5 subtle bodies In astral projection the conscious mind leaves the physical body and moves into the astral body to experience. In astral projection you remain attached to your physical body by a 'silver umbilical type cord'. Some people are able to see the cord when astral projecting. To astral project, as with all out-of-body experiences, one must feel totally relaxed, clothing fitting comfortable, reclining is best.

When you astral project you are consciously aware of things you encounter while out of your physical body. ‎www.mindreality.com/matrixofmindreality.pdf. ‎www.ladyoftheearth.com/spells/lift-curse.txt. MAGICKAL CLEANSING AND LIFTING A 'CURSE' Recently I worked in a small office with many young women from very superstitious backgrounds. 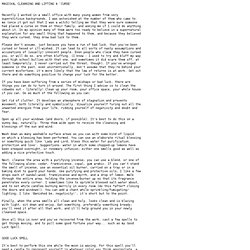 I was astonished at the number of them who came to me (once it got out that I was a witch) telling me that they were sure someone had placed a curse on them or their family, and asking me if I could do anything about it. In my opinion many of them were too ready to believe in a supernatural explanation for any small thing that happened to them, and because they believed they were cursed, they drew bad luck to them. Please don't assume, just because you have a run of bad luck, that you've been cursed or hexed or ill-wished. It can lead to all sorts of nasty assumptions and accusations of (usually) innocent people.

Even people who claim they have cursed you, or will do so, are often bluffing. Metaphysical Teachers — Human Potential, Spirituality and Wellness.