The Zodiac-Bible In The Stars 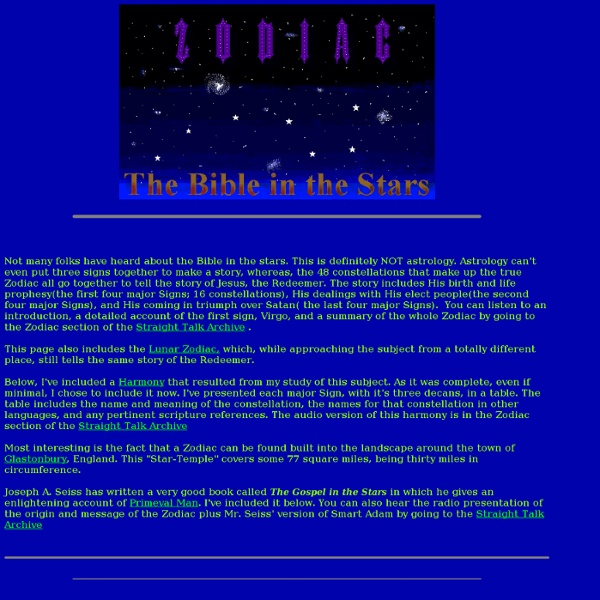 Not many folks have heard about the Bible in the stars. This is definitely NOT astrology. Astrology can't even put three signs together to make a story, whereas, the 48 constellations that make up the true Zodiac all go together to tell the story of Jesus, the Redeemer. The story includes His birth and life prophesy(the first four major Signs; 16 constellations), His dealings with His elect people(the second four major Signs), and His coming in triumph over Satan( the last four major Signs). You can listen to an introduction, a detailed account of the first sign, Virgo, and a summary of the whole Zodiac by going to the Zodiac section of the Straight Talk Archive . This page also includes the Lunar Zodiac, which, while approaching the subject from a totally different place, still tells the same story of the Redeemer. Below, I've included a Harmony that resulted from my study of this subject. Joseph A. You'll notice that the Biblical Zodiac doesn't start with Aries. Joseph A. Who made it? Related:  kara74

What Divides Us And Them | Science Of Spirituality Article on Speakingtree The ‘other’, across cultures, has been seen variously as a friend – an extension of oneself – or as a foe posing a threat to one’s freedom. The other has been seen by some as deserving our concern or respect, by some as an opportunity for solidarity or mutual transformation, and by some typically as an unwelcome practical, political or cultural limitation. The other can be the ethnic other, the cultural other, the religious other, the national other or simply the other gender. Sartre sees the other as obstruction to an individual’s freedom. So much so that he considers the other as hell.Some authors in the Indic tradition (Manu and Kautilaya, for example) prescribe different awards and punishments both in terms of quality and quantity for identical action to different classes. It is hard to see how such a differential treatment could be justified in the present day world, which lays great emphasis on equality. The possibility of amalgamation is there in a bad person but not in an alien.

Total Solar Eclipse 2012 - Total Solar Eclipse 2012 Education Resources Astronomy of Babylon With the exception of the Venus tables of Ammiza-duga, which probably originated in the seventeenth century BC, most of the surviving Mesopotamian astronomical texts were written between 650 and 50 BC. These clay tablets with cuneiform writing are called astronomical diaries, and they are the unmistakable observations of specialists: professional astronomer-scribes. A typical diary entry begins with a statement on the length of the previous month. It might have been 29 or 30 days. Then, the present month's first observation - the time between sunset and moonset on the day of the first waxing crescent - is given, followed by similar information on the times between moonsets and sunrises and between moonrises and sunsets, at full moon. At the end of the month, the interval between the rising of the last waning crescent moon and sunrise is recorded. Assyrian star map from Nineveh (K 8538). If we are seeking immortality, the sky is a good place to start.

28 Natural Ways To Detox Your Body Please Share This Page: Google + stumbleupon tumblr reddit If you are a first-time visitor, please be sure to like us on Facebook and receive our exciting and innovative tutorials on herbs and natural health topics! Photo – © Pixelbliss – Fotolia.com Here’s another discovery that we just made on the subject of detoxing – courtesy of our friends over at Bembu.com It’s a great page – not just a plain “do this, do that” numbered list; but each one contains a full breakdown of the method with explanations and tips. Not only do the methods make total sense from the point of a healthy lifestyle, but Bembu have gone the extra mile with their attention to detail – and this is exactly the sort of thing that we look out for when combing the infinite trails of the WWW for the best stuff to share with you. Not too much else to say about this one. Ok, here is the link to the full list of 28 Natural Ways To Detox Your Body:

The Zodiac, Cherubim & The Sphinx - Zodiac astrology mythology, Ezekiel 41:18 And it (the paneling of the holy place of the temple) was made with cherubs ...and two faces were to a cherub, the face of a man, toward the palm tree from here, and a young lion's face toward the palm tree from there. It was made to all the house round and round...on the wall of the temple. Myth and God's Message in the Heavens The pictures found today in the zodiac were not developed by the Greeks, but were in place perhaps as early as 4000 B.C. predating even the civilizations of Sumeria . These pictures were not merely arranged in haphazard order to aid in the tracking of the star movements, but with the purpose of depicting an epic narrative. Sphinx were often placed at entrances to palaces or temples of antiquity. The combination of all four creatures in one constitutes what is described in Ezekiel and elsewhere in the Bible as a type of angel. printer friendly version Please view the following books for further info:Witness of the Stars by E.W.