Consciousness. Wheels of Life: A User's Guide to the Chakra System. The Science Behind Chakras. There is much controversy associated with the existence of CHAKRAS. 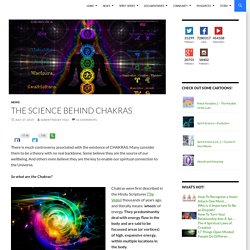 Many consider them to be a theory with no real backbone. Some believe they are the source of our wellbeing. And others even believe they are the key to enable our spiritual connection to the Universe. So what are the Chakras? Chakras were first described in the Hindu Scriptures (The Vedas) thousands of years ago, and literally means ‘wheels‘ of energy. There are thought to be 114 Chakras within the body in total, but 7 main Chakras spanning from the base of the spine to the crown of the head, and are considered to follow the curvature of the spine. Connected to these Chakras, there are said to be Nadis (literally translates to RIVERS in Sanskrit). ‘Everything is Energy’. We like to think of space as empty and matter as solid. Everything connects via magnetic energy and is electrical energy. All matter is held together via energetic bonds and consist of these atoms, of which most, is space. Now for some Biology: The Nature Of Consciousness (by Alan Watts) SPIRITUAL STUFF. Chakras.

The Science of Meditation. While meditation has been around for thousands of years, it is only recently that scientists have probed its physiological effects on practitioners. 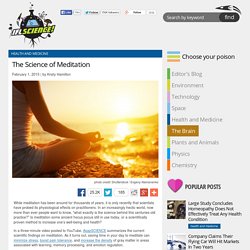 In an increasingly hectic world, now more than ever people want to know, "what exactly is the science behind this centuries-old practice? " Is meditation some ancient hocus pocus still in use today, or a scientifically proven method to increase one’s well-being and health? In a three-minute video posted to YouTube, AsapSCIENCE summarizes the current scientific findings on meditation.

As it turns out, saving time in your day to meditate can minimize stress, boost pain tolerance, and increase the density of gray matter in areas associated with learning, memory processing, and emotion regulation. To learn more, watch the video below. Read this next: See-Through Shrimp-Like Creature Has a Dozen Retinas in Each Eye. Mysticism, etc. Transcendentalism, An American Philosophy. Walt Whitman's Leaves of Grass introduced the "free verse" style of poetry, reflecting the individualistic tone of transcendentalism. 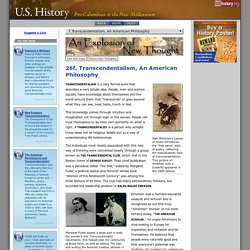 This picture of Whitman with a butterfly appeared in the 1889 edition. Transcendentalism is a very formal word that describes a very simple idea. People, men and women equally, have knowledge about themselves and the world around them that "transcends" or goes beyond what they can see, hear, taste, touch or feel. This knowledge comes through intuition and imagination not through logic or the senses. People can trust themselves to be their own authority on what is right. The individuals most closely associated with this new way of thinking were connected loosely through a group known as The Transcendental Club, which met in the Boston home of George Ripley. Margaret Fuller played a large part in both the women's and Transcendentalist movements. Emerson was a Harvard-educated essayist and lecturer and is recognized as our first truly "American" thinker. Brahma Kumaris Blog on Speakingtree.in. I feel detachment is one of those words which, if not properly understood, could make the spiritual seeker’s life a real nightmare. 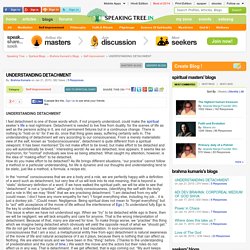 Detachment is needed to live free from duality, for the scenes of life as well as the persons acting in it, are not permanent fixtures but in a continuous change. There is nothing to “hold on to” for if we do, once that thing goes away, suffering certainly sets in. The understanding of detachment will vary according to our consciousness. From a merely materialistic view of the self, known as “bodyconsciousness”, detachment is quite different from a spiritual viewpoint. It has been mentioned:”Do not make effort to be loved, but make effort to be detached and you will automatically be loved.” How do you make effort to be detached? The issue is when we have not understood ego. I “must be detached” … it is her own karma after all... so, I decided not to answer her call...” Separation is not detachment. Ancient indian science and technology. Culture. Soul. KARMA. Science & Spirituality. INFORMATION 2015.