An Interview with Douglas R. Hofstadter, following ''I am a Strange Loop'' 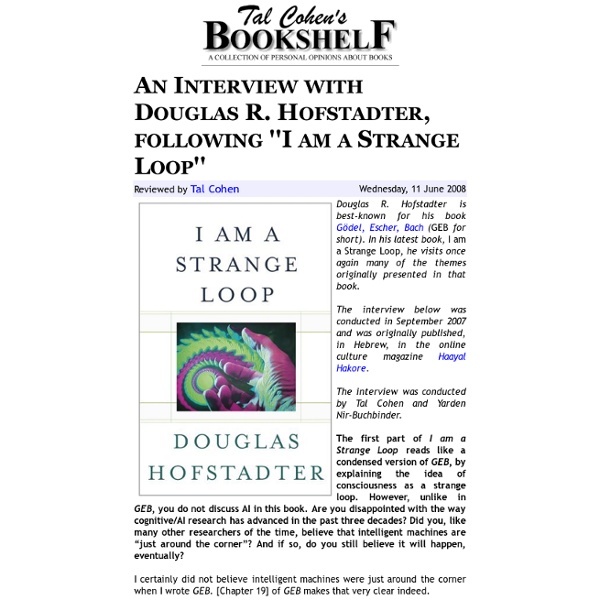 Douglas R. Hofstadter is best-known for his book Gödel, Escher, Bach (GEB for short). In his latest book, I am a Strange Loop, he visits once again many of the themes originally presented in that book. The interview below was conducted in September 2007 and was originally published, in Hebrew, in the online culture magazine Haayal Hakore. The interview was conducted by Tal Cohen and Yarden Nir-Buchbinder. The first part of I am a Strange Loop reads like a condensed version of GEB, by explaining the idea of consciousness as a strange loop. I certainly did not believe intelligent machines were just around the corner when I wrote GEB. Am I disappointed by the amount of progress in cognitive science and AI in the past 30 years or so? I am a deep admirer of humanity at its finest and deepest and most powerful — of great people such as Helen Keller, Albert Einstein, Ella Fitzgerald, Albert Schweitzer, Frederic Chopin, Raoul Wallenberg, Fats Waller, and on and on. We'll return to Kurzweil soon.

I Am a Strange Loop I Am a Strange Loop is a 2007 book by Douglas Hofstadter, examining in depth the concept of a strange loop to explain the sense of "I". The concept of a strange loop was originally developed in his 1979 book Gödel, Escher, Bach. Hofstadter had previously expressed disappointment with how Gödel, Escher, Bach, which won the Pulitzer Prize in 1980 for general nonfiction, was received. In the preface to its 20th-anniversary edition, Hofstadter laments that the book was perceived as a hodgepodge of neat things with no central theme. Hofstadter seeks to remedy this problem in I Am a Strange Loop by focusing and expounding on the central message of Gödel, Escher, Bach. As an exploration of the sense of "I", Hofstadter explores his own life, and those to whom he has been close.[4][5][6][7][8][9] See also[edit] References[edit] Jump up ^ Hofstadter, Douglas R. (1999).

The Universe Magnified This is one of the most beautiful infographics we've ever seen: a high resolution view of different levels of the universe. Our favorite parts are the jaw-dropping nebulae and then the point where you see the size of Pluto compared to Texas. Puts things into perspective. Copyright 2012. Embed this infographic on your site! <iframe width="600" height="388" scrolling="no" src=" frameborder="0" allowfullscreen></iframe><br />Copyright 2012. To get started with the infographic, click on one of the nine entry point images. The slider at the bottom of the screen lets you move around from bigger to smaller and smaller to bigger. And in between you see every day objects like animals and buildings and planets and stars. Have fun with this!

Classification System | The Daffodil Society What do those numbers and letters mean? What are all those number and letter combinations that appear in daffodil catalogues? The Daffodil Society follows the Royal Horticulture Society’s (RHS) daffodil classification system. In 1975, the RHS adopted a colour code system devised by American Dr. Tom Throckmorton. The letter refers to the colours of the daffodil as follows: W – White or WhitishG – GreenY – YellowP – PinkO – OrangeR – Red Daffodils are given a colour code to describe both the perianth (petal) colour and the cup colour. See the photo of Kaylee Ann below as an example: All daffodils are classified into one of thirteen divisions.

Perianth Diagram showing the parts of a mature flower. In this example the Perianth is separated into a Calyx (sepals) and Corolla (petals) The perianth (sometimes called perigonium or perigon) is the non-reproductive part of the flower, and structure that forms an envelope surrounding the sexual organs. The term perianth is derived from the Greek peri, meaning around, and anthos, meaning flower, while perigonium is derived from gonos, meaning seed, i.e sexual organs. Flowering plants[edit] When the corolla consists of separate petals the term apotepalous is used, or polypetalous where there are many petals. Both sepals and petals may have stomata and veins, even if vestigial. Corona[edit] Flower of Narcissus showing an outer white corolla with a central yellow corona (paraperigonium) Ligulate floret, typical for flowers of some members of the family Asteraceae:A. ovaryB. pappusC. thecaD. liguleE. style with stamen Liverworts[edit] Bibliography[edit] Simpson, Michael G. (2011). External links[edit]

Definitions of Sciences and Studies Sciences and Studies This list defines 633 sciences, arts and studies of various degrees of respectability and rarity, ranging from the common and esteemed (chemistry) to the obscure and quirky (peristerophily). Over the past century, the range and scope of scientific endeavours has expanded exponentially, so that practically any field of study has a name associated with it. Most of these terms end in 'ology', from the Greek logos, meaning 'word'. I hope you have found this site to be useful.

Seven Volcanoes In Six Different Countries All Start Erupting Within Hours Of Each Other Seven Volcanoes In Six Different Countries All Start Erupting Within Hours Of Each OtherA new island has appeared in the Pacific. A submarine eruption just off Nishino-Shima Island Japan has erupted for the first time in 40 years. The Japanese Navy noticed the explosions as boiling lava met sea water giving rise to plumes of steam and ash. Almost 7,000 miles away in Mexico, the Colima volcano blew its top after a period of relative calm. In Guatemala the ‘Fire Mountain’ belched out lava and sent up a moderate ash cloud causing an ash fall over nearby towns. In Vanuatu the Yasur volcano is giving some cause for concern. Over to Italy, Mount Etna is putting on quite a display. The Etna eruption (Nov 17th) In Indonesia a four mile high ash cloud is making life hard for residents. Mount Sinabung ash cloud Still in Indonesia but on the island of Java this time, Mount Merapi exploded yesterday. So, we have eruptions big enough to prompt evacuations. Article source: By Chris Carrington Colima

Mind-to-mind thought talking possible by 2030, scientist says Today we enjoy basic conversations with our smart phone, desktop PC, games console, TV and soon, our car; but voice recognition, many believe, should not be viewed as an endgame technology. Although directing electronics with voice and gestures may be considered state-of-the-art today, we will soon be controlling entertainment and communications equipment not by talking or waving; but just by thinking! Forget Siri, if future-thinking researchers have their way, your brain could soon be chatting away on the phone. A new implant developed by UC-Berkeley neuroscientist, Robert Knight, could create a game-changing relationship between you and your machines. You may soon be able to transmit thoughts via the Internet using a translator chip implanted in the brain that converts thoughts into words. Enter University of Reading's Dr. In 1998, Warwick implanted a transmitter in his arm enabling him to control doors and other devices. What might this revolutionary neuroscience lead too?