Comparative Religion - Reincarnation in world religions. Its meaning and consequences by Ernest Valea The concept of reincarnation seems to offer one of the most attractive explanations of humanity’s origin and destiny. 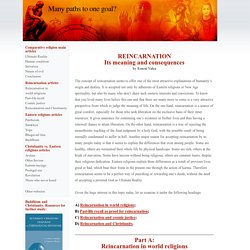 It is accepted not only by adherents of Eastern religions or New Age spirituality, but also by many who don’t share such esoteric interests and convictions. To know that you lived many lives before this one and that there are many more to come is a very attractive perspective from which to judge the meaning of life. On the one hand, reincarnation is a source of great comfort, especially for those who seek liberation on the exclusive basis of their inner resources. Given the huge interest in this topic today, let us examine it under the following headings: A) Reincarnation in world religions;B) Past-life recall as proof for reincarnation;C) Reincarnation and cosmic justice;D) Reincarnation and Christianity. Part A: Reincarnation in world religions The origin of samsara must be credited to Hinduism and its classic writings. 1. The Knower and the Known Arise as One, Not Two - A Bridge to Awareness. 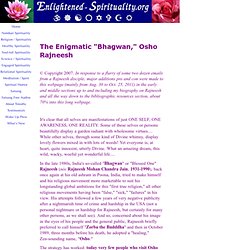 In response to a flurry of some two dozen emails from a Rajneesh disciple, major additions pro and con were made to this webpage (mainly from Aug. 30 to Oct. 25, 2011) in the early and middle sections up to and including my biography on Rajneesh and all the way down to the bibliographic resources section, about 70% into this long webpage. It's clear that all selves are manifestations of just ONE SELF, ONE AWARENESS, ONE REALITY. Sophia's Children: Powerful Quotations. A good quotation can become a sort of mantra or centering-point for a meditation ... or just the right 'medicine' for reminding us of something important at just the moment when we need reminding! 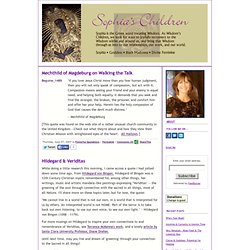 Here are a few good quotations that came across my path recently: ** "Unkind criticism is never part of a meaningful critique of you. Its purpose is not to teach or to help, its purpose is to punish. " ~ Barbara Sher. Hildegard of Bingen Quotes. Angels, living light most glorious! 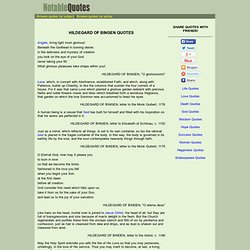 Beneath the Godhead in burning desire in the darkness and mystery of creation you look on the eye of your God never taking your fill: What glorious pleasures take shape within you! HILDEGARD OF BINGEN, "O gloriosissimi" Love, which, in concert with Abstinence, established Faith, and which, along with Patience, builds up Chastity, is like the columns that sustain the four corners of a house. For it was that same Love which planted a glorious garden redolent with precious herbs and noble flowers--roses and lilies--which breathed forth a wondrous fragrance, that garden on which the true Solomon was accustomed to feast his eyes. 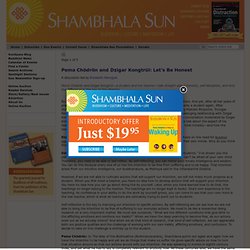 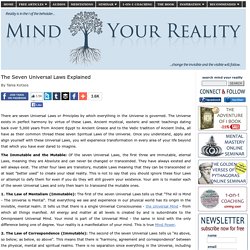 The Universe exists in perfect harmony by virtue of these Laws. Ancient mystical, esoteric and secret teachings dating back over 5,000 years from Ancient Egypt to Ancient Greece and to the Vedic tradition of Ancient India, all have as their common thread these seven Spiritual Laws of the Universe. Once you understand, apply and align yourself with these Universal Laws, you will experience transformation in every area of your life beyond that which you have ever dared to imagine.

The Immutable and the Mutable: Of the seven Universal Laws, the first three are immutable, eternal Laws, meaning they are Absolute and can never be changed or transcended. They have always existed and will always exist. 1. 2. 3. The axiom that "like energy attracts like energy", upon which the Law of Attraction is based, has it's foundation in this Law. Meditation. 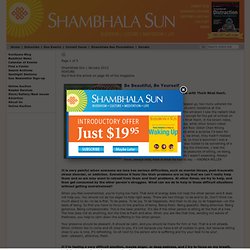 After Thay’ s 2011 Vancouver retreat wrapped up, two nuns ushered me into the kitchen/living room portion of a student residence at the University of British Columbia. Through the windows I saw the radiant blue of the sky and the Georgia Strait. Inside—except for the pot of orchids on the table—it was all earthy brown: Thich Nhat Hanh, in his brown robes, sipped from a clear cup of goldenbrown tea, while other brown-robed monastics gathered on the brown sofa and floor. Sister Chan Khong introduced me to Thay, then, smiling, said what a surprise I’d been for them. When I’d requested this interview, via email, they hadn’t realized that “Andrea Miller” was a woman’s name, so they’d assumed I was a man, an older one at that. It is very painful when someone we love has serious difficulties, such as mental illness, post-traumatic stress disorder, or addiction.