BuddhaAtTheGasPump. Buddha at the Gas Pump - Interviews with "Ordinary" Spiritually Awakening People. List of messiah claimants. This is a list of people who have been said to be a messiah, either by themselves or by their followers. 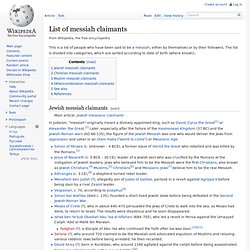 The list is divided into categories, which are sorted according to date of birth (where known). Jewish messiah claimants[edit] In Judaism, "messiah" originally meant a divinely appointed king, such as David, Cyrus the Great[1] or Alexander the Great.[2] Later, especially after the failure of the Hasmonean Kingdom (37 BC) and the Jewish–Roman wars (AD 66-135), the figure of the Jewish Messiah was one who would deliver the Jews from oppression and usher in an Olam Haba ("world to come") or Messianic Age. Christian messiah claimants[edit] Hindu Magicians: Fakirs or Fakers?? Once again into uncharted waters.... the nice thing about going into a subject which one is a complete ignoramus about, is that it's easier to maintain humility. 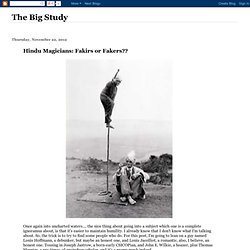 I already know that I don't know what I'm talking about. So, the trick is to try to find some people who do. For this post, I'm going to lean on a guy named Louis Hoffmann, a debunker, but maybe an honest one, and Louis Jacolliot, a romantic, also, I believe, an honest one. Tossing in Joseph Jastrow, a born-early CSICOPian, and John E. Bamakhepa. Bamakhepa, the tantric saint of Tarapith in the 19th century As a child, he worshipped Goddess Tara at his home. 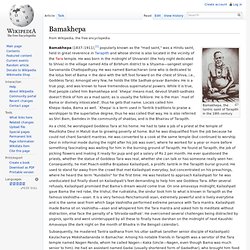 He had to take a job of a priest at the temple of Mauliksha Devi in Maluti due to growing poverty at home. But he was disqualified from the job because he could not chant Sanskrit mantras. He was converted to a cook at the same temple (but continued to worship Devi in informal mode during the night after his job was over), where he worked for a year or more before something fascinating was waiting for him in the burning ground of Tarapith. Holy Man Hasn't Eaten for 70 Years. A holy man in India claims that he has not eaten or drank anything for 70 years. 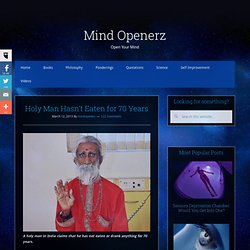 Prahlad Jani is the 83-year old man who lives in a cave near Amba JI Temple without any kind of food or water. Mr. Think Body Electric: Yogis, Ascetic, and Fakirs: Fascinating historical images of India that I don't pretend to understand. On further investigation, I figured out that this collection is part of a much larger set of online resources put together by Dr. 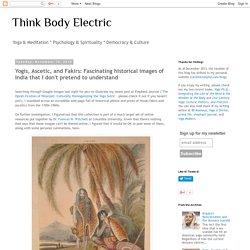 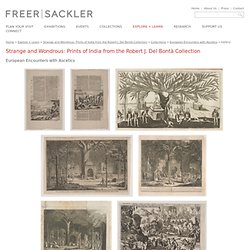 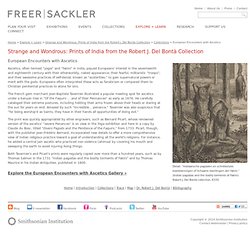 Incredible Photos of People Living Off The Grid Who Abandoned Civilization for Life in the Wilderness. (Before It's News) Photographer Antoine Bruy not only traveled and lived with off-grid families for three years, but captured captivating photos of their Walden-esque existence. 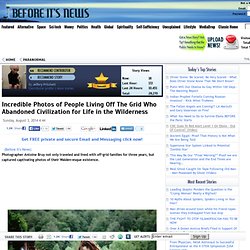 Image Credit: Antoine Bruy When screeching city noises and demands from the 9-5 job become too much, most people can only dream of what quiet isolation in the rural countryside could be like. But French photographer Antoine Bruy turned that dream into a reality by hitchhiking across Europe from 2010 to 2013. The artist wandered through remote mountain regions without any fixed destination or route in mind, but along the way met several individuals who had willingly abandoned hectic city life in exchange for retreat in the deep wilderness. William Walker Atkinson Books and Life. William Walker Atkinson. William Walker Atkinson William Walker Atkinson (December 5, 1862 – November 22, 1932) was an attorney, merchant, publisher, and author, as well as an occultist and an American pioneer of the New Thought movement. 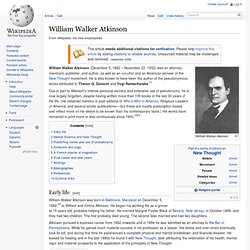 He is also known to have been the author of the pseudonymous works attributed to Theron Q. Dumont and Yogi Ramacharaka.[1] Due in part to Atkinson's intense personal secrecy and extensive use of pseudonyms, he is now largely forgotten, despite having written more than 100 books in the last 30 years of his life. (He obtained mention in past editions of Who's Who in America, Religious Leaders of America, and several similar publications—-but these are mostly subscription based, and reflect more on his desire to be known than his contemporary fame.) Early life[edit] 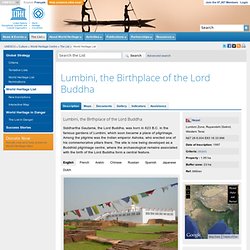 Among the pilgrims was the Indian emperor Ashoka, who erected one of his commemorative pillars there. The site is now being developed as a Buddhist pilgrimage centre, where the archaeological remains associated with the birth of the Lord Buddha form a central feature. Papaji - Fericirea.

Autobiography - Written and completed by Bapak: Raden Mas Muhammad Subuh Sumohadiwidjojo. Muhammad Subuh Sumohadiwidjojo. Bapak redirects here. In Indonesian language, it is a generic term to address elderly man. Literally it means father in Indonesian language. Muhammad Subuh Sumohadiwidjojo (born 1901 in Java, Indonesia; died 1987). As a young man Muhammad Subuh who received a series of intense experiences that he believed gave him contact with a spiritual energy from a higher power. John G. Bennett. John Godolphin Bennett (8 June 1897 - 13 December 1974) was a British mathematician, scientist, technologist, industrial research director and author. He is perhaps best known for his many books on psychology and spirituality, particularly on the teachings of G.I. Gurdjieff. Bennett met Gurdjieff in Istanbul in October 1920 and later helped to co-ordinate the work of Gurdjieff in England after Gurdjieff's arrival in Paris.

He also was active in starting the British section of the Subud movement, and co-founded its British headquarters.