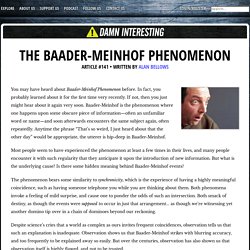 In fact, you probably learned about it for the first time very recently. If not, then you just might hear about it again very soon. Baader-Meinhof is the phenomenon where one happens upon some obscure piece of information—often an unfamiliar word or name—and soon afterwards encounters the same subject again, often repeatedly. Anytime the phrase “That’s so weird, I just heard about that the other day” would be appropriate, the utterer is hip-deep in Baader-Meinhof. Most people seem to have experienced the phenomenon at least a few times in their lives, and many people encounter it with such regularity that they anticipate it upon the introduction of new information.

The phenomenon bears some similarity to synchronicity, which is the experience of having a highly meaningful coincidence, such as having someone telephone you while you are thinking about them. The reason for this is our brains’ prejudice towards patterns. If a tree falls in a forest. A fallen tree in a forest "If a tree falls in a forest and no one is around to hear it, does it make a sound? " is a philosophical thought experiment that raises questions regarding observation and knowledge of reality.

History[edit] Philosopher George Berkeley, in his work, A Treatise Concerning the Principles of Human Knowledge (1710), proposes, "But, say you, surely there is nothing easier than for me to imagine trees, for instance, in a park [...] and nobody by to perceive them.[1] [...] "The objects of sense exist only when they are perceived; the trees therefore are in the garden [...] no longer than while there is somebody by to perceive them Berkeley's example is referred to by William Fossett twenty years later in a consideration of the emergence of meaning: "[T]ease apart the threads [of the natural world] and the pattern vanishes. Some years later, a similar question is posed.

Winchester Mystery House. How to Discover Your Life Purpose in About 20 Minutes. How do you discover your real purpose in life? 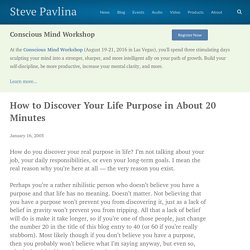 I’m not talking about your job, your daily responsibilities, or even your long-term goals. I mean the real reason why you’re here at all — the very reason you exist. Perhaps you’re a rather nihilistic person who doesn’t believe you have a purpose and that life has no meaning. Doesn’t matter. Not believing that you have a purpose won’t prevent you from discovering it, just as a lack of belief in gravity won’t prevent you from tripping. Here’s a story about Bruce Lee which sets the stage for this little exercise. If you want to discover your true purpose in life, you must first empty your mind of all the false purposes you’ve been taught (including the idea that you may have no purpose at all). So how to discover your purpose in life? Here’s what to do: Take out a blank sheet of paper or open up a word processor where you can type (I prefer the latter because it’s faster).Write at the top, “What is my true purpose in life?” 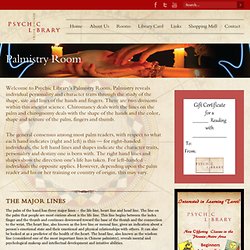 Palmistry reveals individual personality and character traits through the study of the shape, size and lines of the hands and fingers. There are two divisions within this ancient science. Chiromancy deals with the lines on the palm and chirognomy deals with the shape of the hands and the color, shape and texture of the palm, fingers and thumb. The general consensus among most palm readers, with respect to what each hand indicates (right and left) is this — for right-handed individuals, the left hand lines and shapes indicate the character traits, personality and destiny one is born with.

The I Ching Basics. I Ching is an ancient, sophisticated fortune-telling tool used by the Chinese to predict the pattern of events which will govern and shape our destiny. 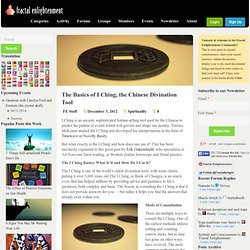 Terence McKenna studied the I Ching and developed his interpretations in the form of Timewave or Novelty theory. But what exactly is the I Ching and how does one use it? This has been succinctly explained in this guest post by Erik Oakenshield, who specializes in Art Nouveau Tarot reading, or Western Zodiac horoscope and Druid practice. The I Ching Basics: What Is It and How Do I Use It? The I Ching is one of the world’s oldest divination texts, with some claims putting it over 3,000 years old The I Ching, or Book of Changes, is an oracle even, that has helped millions by providing advice and guidance to life’s questions, both complex and basic.