Spiritualist Village of Lily Dale, New York. This Is The Most Spiritual Place In Your Home State. Spiritual enlightenment is a great reason for a road trip this summer (as if any reason were needed). 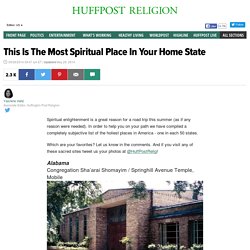 In order to help you on your path we have compiled a completely subjective list of the holiest places in America - one in each 50 states. Which are your favorites? Let us know in the comments. And if you visit any of these sacred sites tweet us your photos at @HuffPostRelig! AlabamaCongregation Sha’arai Shomayim / Springhill Avenue Temple, Mobile. In the strange town of Lily Dale, the living reside happily among the dead. Tucked away beside a serene lake in New York is an idyllic little town with an odd secret: half of its residents are dead, but they're still interacting with the living locals. 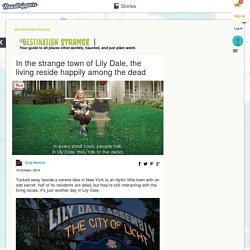 It's just another day in Lily Dale. Often described as a "summer camp for psychics", Lily Dale is home to the largest community of Spiritualists in the world. Psychic Healing Destinations in America. Forget about psychic hotlines, fortune tellers and reiki healers! 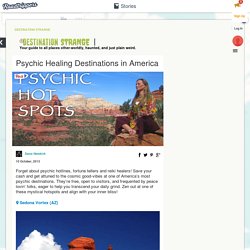 Save your cash and get attuned to the cosmic good-vibes at one of America’s most psychic destinations. They’re free, open to visitors, and frequented by peace lovin’ folks, eager to help you transcend your daily grind. Zen out at one of these mystical hotspots and align with your inner bliss! Sedona Vortex (AZ) Psychic Healing Destinations in the U.S. Sacred Places and their healing powers. Visiting sacred places can have a profoundly positive impact on people’s lives. 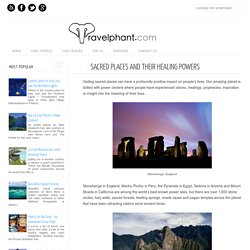 Our amazing planet is dotted with power centers where people have experienced visions, healings, prophecies, inspiration or insight into the meaning of their lives. Stonehenge, England Stonehenge in England, Machu Picchu in Peru, the Pyramids in Egypt, Sedona in Arizona and Mount Shasta in California are among the world’s best known power sites, but there are over 1,000 stone circles, holy wells, sacred forests, healing springs, oracle caves and pagan temples across the planet that have been attracting visitors since ancient times. Machu Picchu The Pyramids. Psychic Places in America - Haunted Travel - Travel Channel. Psychic hotlines? 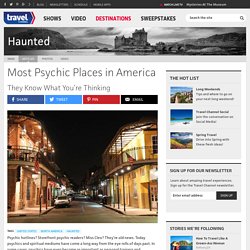 Storefront psychic readers? Miss Cleo? They’re old news. Today psychics and spiritual mediums have come a long way from the eye rolls of days past. Inside Cassadaga, the Psychic Capital of the World. On the surface, Cassadaga resembles a Florida Mayberry. 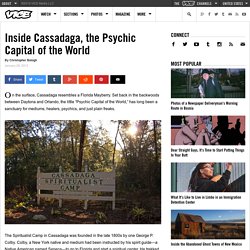 Set back in the backwoods between Daytona and Orlando, the little “Psychic Capital of the World,” has long been a sanctuary for mediums, healers, psychics, and just plain freaks. The Spiritualist Camp in Cassadaga was founded in the late 1800s by one George P. Colby. Colby, a New York native and medium had been instructed by his spirit guide—a Native American named Seneca—to go to Florida and start a spiritual center.