50 Of The Most Useful Websites On The Internet - WeHaveNoTopic 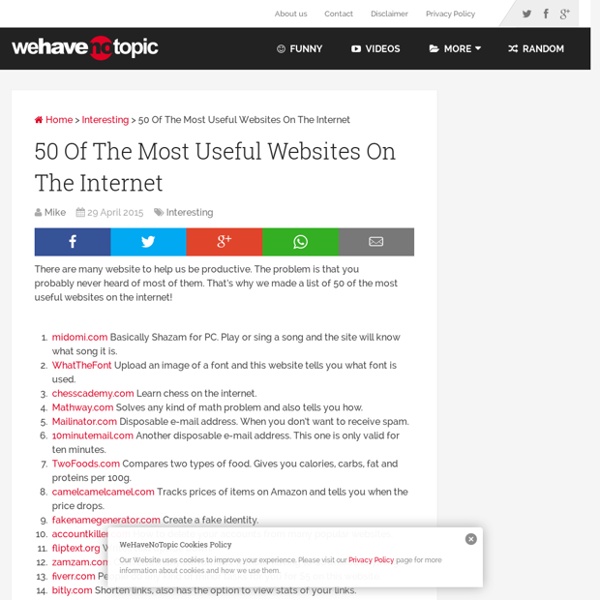 There are many website to help us be productive. The problem is that you probably never heard of most of them. That’s why we made a list of 50 of the most useful websites on the internet! midomi.com Basically Shazam for PC. Play or sing a song and the site will know what song it is.WhatTheFont Upload an image of a font and this website tells you what font is used.chesscademy.com Learn chess on the internet.Mathway.com Solves any kind of math problem and also tells you how.Mailinator.com Disposable e-mail address. When you don’t want to receive spam.10minutemail.com Another disposable e-mail address. About The Author Mike Internet addict.

13 Little Known Free Programs Any LifeHacker Must Try There’s plenty of useful free computer programs and websites that a lot of people don’t know about. Hopefully, after reading this post, your time spent in front of the computer will become a bit more healthy, productive, and easily managed. 1. The 101 Most Useful Websites on the Internet Here are some of the most useful websites on the internet that you may not know about. These web sites, well most of them, solve at least one problem really well and they all have simple web addresses (URLs) that you can memorize thus saving you a trip to Google. And if you find this list useful, also check out the expanded version – The Most Useful Websites – which now offers a collection of 150+ undiscovered and incredibly useful websites to enhance your productivity. ctrlq.org/screenshots – for capturing screenshots of web pages on mobile and desktops. dictation.io – online voice recognition in the browser itself. Changelog and Updates

25 maps that explain the English language English is the language of Shakespeare and the language of Chaucer. It’s spoken in dozens of countries around the world, from the United States to a tiny island named Tristan da Cunha. It reflects the influences of centuries of international exchange, including conquest and colonization, from the Vikings through the 21st century. Here are 25 maps and charts that explain how English got started and evolved into the differently accented languages spoken today. The origins of English

The Trump Resistance Plan: A Timeline – Russia and President Trump Of the Jan. 6, 2017, meeting, when Comey told Trump about the infamous Steele dossier, Trump said: “He shared it so that I would think he had it out there” as leverage against Trump. Of the Feb. 14, 2017, meeting, when Trump said he hoped Comey could see his way to “letting Flynn go,” Trump said: “He said I said ‘hope’ — ‘I hope you can treat Flynn good’ or something like that. I didn’t say anything. But even if he did — like I said at the news conference on the, you know, Rose Garden — even if I did, that’s not — other people go a step further. I could have ended that whole thing just by saying — they say it can’t be obstruction because you can say: ‘It’s ended. 25+ apps that the TED staff swears make their everyday lives easier At our small, fast-moving nonprofit company, everyone does a couple of jobs — and productivity apps help us manage roles that shift between coding, writing/designing and running a full-scale conference twice a year. We asked the TED staff what apps they can’t live without. And beyond the classics—Instagram, Google Maps, Spotify, Uber, Seamless—we found some great apps that might help you too. (A star denotes that the app is free, or at least has a free version.) For random life stuff… Dark SkyA weather app with startling accuracy, its interface tells you things like: “Light rain starting in 22 minutes.”

The Ultimate Guide to Web Hosting from WhoIsHostingThis.com Chapter 1: What is Web Hosting? Most people never really think about where a website is, or even what a website is. I turn on my computer, open a browser, and go to Google or Amazon or Yahoo. But what am I doing when I “visit” a website? the-100-most-useful-websites-the-internet Back in September 2014, it was estimated that there are now over one billion websites on the internet, with that number increasing every second. With so many sites out there, it can be extremely difficult to locate a resource that will actually fulfil your needs and help you with your projects or inquires. Fortunately, the list below features over 100 websites you can use for almost any creative project, intellectual research or simply for fun! TallTweets lets you write tweets longer than 140 characters, and Tubemogel.com allows you to upload video to multiple sites at once, including Youtube. Wordle.net helps to summarise large pieces of text by creating a word cloud of the most common words, and Wolframalpha will answer almost anything immediately so you don’t have to rummage through Google.

100 Useful Web Tools for Writers All kinds of writers, including poets, biographers, journalists, biz tech writers, students, bloggers and technical writers, take a unique approach to their jobs, mixing creativity with sustainability. Whether you’re a freelance writer just scraping by or someone with a solid job and more regular hours, the Internet can provide you with unending support for your practical duties like billing, scheduling appointments, and of course getting paid; as well as for your more creative pursuits, like developing a plot, finding inspiration and playing around with words. Turn to this list for 100 useful Web tools that will help you with your career, your sanity and your creativity whenever your write. Getting Organized

9 of the Strangest and Loveliest Dioramas Ever While there are endless different kinds of dioramas, there is something that most all of them have in common: the strange beauty that comes from capturing our world in miniature, in exacting detail. Some of the most impressive examples of this craft are on display in museums around the globe, while others a bit more off the beaten path. From bizarre to beautiful, here are nine places to see these intricate three-dimensional snapshots of the world. Fisher Museum Forestry Dioramas Since 1907, Harvard University has managed 3,000 acres of woodlands in western Massachusetts that serve as the field lab and research center for the university’s graduate forestry program.