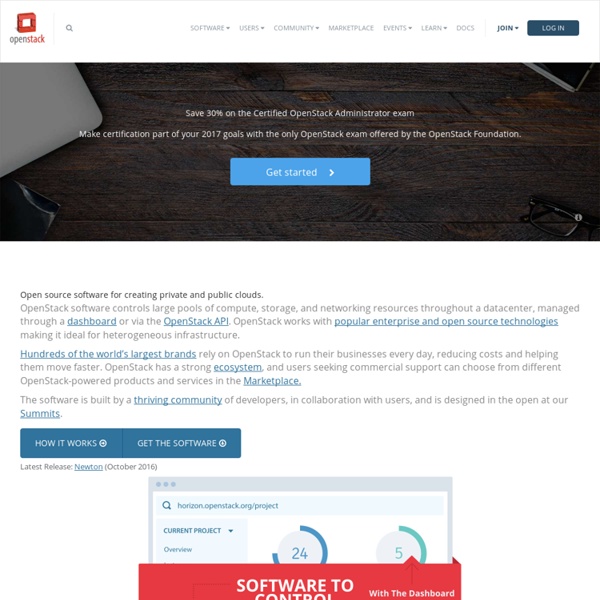 OpenStack OpenStack is a global collaboration of developers and cloud computing technologists producing the ubiquitous open source cloud computing platform for public and private clouds. The project aims to deliver solutions for all types of clouds by being simple to implement, massively scalable, and feature rich. The technology consists of a series of interrelated projects delivering various components for a cloud infrastructure solution. Who's behind OpenStack? Founded by Rackspace Hosting and NASA, OpenStack has grown to be a global software community of developers collaborating on a standard and massively scalable open source cloud operating system. Our mission is to enable any organization to create and offer cloud computing services running on standard hardware.

How to Prioritize Work: 7 Practical Methods for When "Everything is Important" One of the biggest struggles in the modern workplace is knowing how to prioritize work. Workloads are ballooning and everything feels important. However, the truth is that a lot of the work we do every day doesn’t really need to be done. At least not right away. Learning how to prioritize means getting more out of the limited time you have each day. It’s one of the cornerstones of productivity and once you know how to properly prioritize, it can help with everything from your time management to work life balance.

Cloudkick, manage servers better Monitor anywhere With Rackspace Cloud Monitoring, you can monitor your websites—whether they're hosted on the Rackspace public cloud, Rackspace dedicated servers, servers in your data centers, or even servers in other providers' data centers. Send alerts to your laptop or smartphone to stay on top of your entire infrastructure, including websites, ports, protocols, and more. And use graphs to quickly analyze your server activity and identify trends, outliers, and patterns. Server Monitoring Monitor your servers, no matter where they're hosted DIY, Battery-Powered Coil-Gun Destroys All Toys You're a kid, and therefore you like to shoot things. But what if the catapult and the air-rifle just aren't cutting it anymore? Then you, like Jason (aka Larsplatoon) make your own coil-gun.

Distributed Management Task Force Cloud Management Standards Working to Address Management Interoperability for Cloud Systems Technologies like cloud computing and virtualization are rapidly being adopted by enterprise IT managers to better deliver services to their customers, lower IT costs and improve operational efficiencies. DMTF's Cloud Management Initiative is focused on developing interoperable cloud infrastructure management standards and promoting adoption of those standards in the industry. The work of DMTF working groups promoted by the Cloud Management Initiative is focused on achieving interoperable cloud infrastructure management between cloud service providers and their consumers and developers. Les 150 meilleurs joueurs dans le Cloud Computing Cloud Expo Early Bird Savings A robust ecosystem of solutions providers is emerging around cloud computing. Here, SYS-CON's Cloud Computing Journal expands its list of most active players in the fast-emerging Cloud Ecosystem, from the 'mere' 100 we identified back in January of this year, to half as many again - testimony, if any further were needed, to the fierce and continuing growth of the "Elastic IT" paradigm throughout the world of enterprise computing. Editorial note: The words in quotation marks used to describe the various services and solutions in this round-up are in every case taken from the Web sites cited.

An Introduction to R Table of Contents This is an introduction to R (“GNU S”), a language and environment for statistical computing and graphics. R is similar to the award-winning1 S system, which was developed at Bell Laboratories by John Chambers et al. It provides a wide variety of statistical and graphical techniques (linear and nonlinear modelling, statistical tests, time series analysis, classification, clustering, ...). This manual provides information on data types, programming elements, statistical modelling and graphics. This manual is for R, version 3.1.0 (2014-04-10). How it Works Table of Contents This is a high-level, technical description of how Heroku works. It ties together many of the concepts you’ll encounter while writing, configuring, deploying and running applications on the Heroku platform. Performing one of the Getting Started tutorials will make the concepts in this documentation more concrete. Read this document sequentially: in order to tell a coherent story, it incrementally unveils and refines the concepts describing the platform.

Hate PowerPoint? Here Are 5 Web-based Alternatives Whether they're for clients, customers or colleagues, visual presentations are an unavoidable part of doing business. For years, Microsoft PowerPoint has been the standard bearer of slide presentation applications, but several Web-based alternatives have emerged. For the most part, the alternatives offer similar functionality to PowerPoint, sometimes more, sometimes less. One obvious advantage to Web-based presentations is that they're stored in the cloud, eliminating the potential for nightmare scenarios involving lost or corrupted thumb drives. Prezi If the traditional slide-by-slide-style presentation doesn't quite cut it for you, there's Prezi, which works a bit more like one giant virtual whiteboard containing your entire presentation.

GENI and IF-MAP Network Instrumentation and Measurement What if you were designing the Internet from scratch? What capabilities would you build into it? How would the protocols work --- would you have chosen TCP/IP? The GENI project looks at all that and more, and takes a "clean-slate" approach to designing a next-generation network from scratch.

Comment protéger votre stockage en nuage de piratage? The concept of cloud storage has become more common these days especially when offered commercially since it's more cost effective for a large corporation to store data on an off-site data center. It is cheaper and they don't have to worry about finding space for storing data on server which can be the size of a warehouse. However, at individual level, it is preferred less over local storage devices like flash drive, hard drive and disk drive. What is cloud storage?

Python: Inverted Index for dummies An Inverted Index is an index data structure storing a mapping from content, such as words or numbers, to its document locations and is generally used to allow fast full text searches. The first step of Inverted Index creation is Document Processing In our case is word_index() that consist of word_split(), normalization and the deletion of stop words ("the", "then", "that"...). def word_split(text): word_list = [] wcurrent = [] windex = None for i, c in enumerate(text): if c.isalnum(): wcurrent.append(c) windex = i elif wcurrent: word = u''.join(wcurrent) word_list.append((windex - len(word) + 1, word)) wcurrent = [] if wcurrent: word = u''.join(wcurrent) word_list.append((windex - len(word) + 1, word)) return word_list word_split() is quite a long function that does a really simple job split words. You can rewrite it with just one line using something like re.split('\W+', text). Cleanup and Normalize are just to function filters to apply after word_split().

Cloud Computing: Multi-Tenancy Misconceptions One of the biggest benefits of the cloud, ‘Dynamic Scaling,' goes hand-in-hand with multi tenancy. If your application has a fixed group of users, you can easily predict the server load and still handle it with a typical data center. However, a large number of users, basically multi tenants, makes the cloud platform most efficient in terms of usability of the application and ‘Do More With Less Resources.' Some of the other characteristics of a typical multi-tenant application, benefited by Cloud are:

What Is RDF and Why Should I Care? In a previous article we discussed how the Semantic Web is about making content easier for machines to interpret. This is accomplished in a number of ways including tagging content as structured data and defining content as linked data within the Linked Open Data cloud (LOD). RDF provides us with a framework to do both.