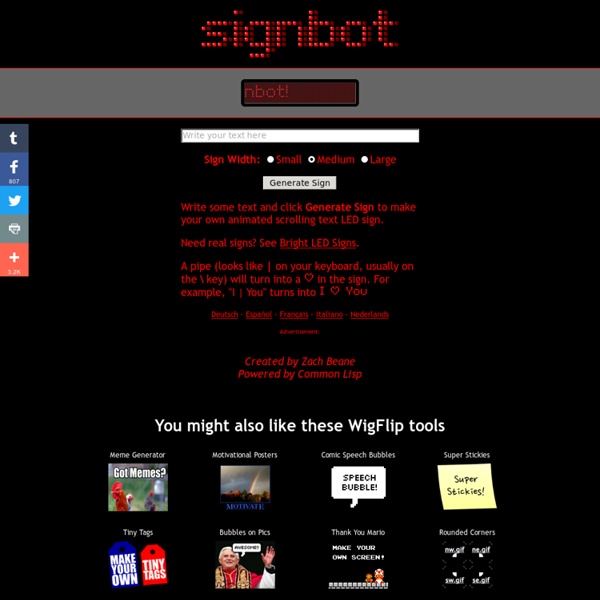 Geco Mark II – The World’s First Glasses Mounted Action Cam What Is Geco? The Geco Mark II is the world’s smallest HD action cam that can be mounted to any pair of glasses for a first person point of view. Weighing in at just below 18 grams, it will be the smallest action camera in the world and with the price point that they are striving toward, the most affordable. It’s simple, hands-free and records in 720p! How Geco Will Change the Market Place?

Label Maker Make a label! Note: some of the fonts are not very complete, generally just letters and numbers. Any characters not in the font will just get skipped. Most of these fonts were adapted from IconBAZAAR, 007Fonts, Fonts NOW, Fonts Empire, CoolArchive, and Famous Fonts. If you use labels from here on your web page (which is the whole point of the Label Maker!), how about putting up a credit link back to here? ORNL unveils 3D-printed Shelby Cobra in Detroit It stands to reason that if you had a big enough 3D printer, one of the first things you might do is print a replica of a vintage 1965 Shelby Cobra sportscar, and that's what the Oak Ridge National Laboratory (ORNL) did for the 2015 North American International Auto Show (NAIAS) in Detroit. The result of a project that took only six weeks from conception to finished product, the vehicle not only celebrates the Shelby Cobra's 50th anniversary, but also acts as a demonstration of modern additive manufacturing and rapid prototyping technology. View all From the outside, the 1,400-lb (635-kg) ORNL Cobra looks like a well-made Shelby replica with an updated digital display, but it hides 500 lb (228 kg) of 3D-printed parts made of 20 percent carbon fiber. These make up the shell, the support frame, the passenger monocoque,and the grille. Even the headrest brackets are 3D-printed.

Free and NO Registration Required! Ads Blocked:That's OK! You are viewing a 'AD-Free' version of our site that has limited functionality You will get a MUCH IMPROVED application by simply allowing our advertisements to show! If you are completely against ads, we do have a fee supported site that contains no ads, and also offers a few extras over our ad supported site! BEFORE puchasing anything or leaving the site, may we suggest turning off your ad blocker and make 1 worksheet just see what you're missing by trying the ad supported version - we think you'll find it is well worth it! If not, we understand and thank you for giving us a try! Saving Options:Ad Block: NoneAd supported: 2 Word List Save SlotsPremium Subscriber: 10 Word List Save Slots

GameMaker: Studio GameMaker: Studio caters to entry-level novices and seasoned game development professionals equally, allowing them to create cross-platform games in record time and at a fraction of the cost of conventional tools! In addition to making game development 80 percent faster than coding for native languages, developers can create fully functional prototypes in just a few hours, and a full game in just a matter of weeks. Key Features Outernet: Humanity's Public Library Humanity's Public Library #outernetrequest The content on Outernet is chosen democratically.

Install Ubuntu Linux Alongside Windows 8 in 10 easy steps Introduction One of the most talked about topics of the last year has been the Windows 8 debacle and how it is now much more difficult to install Linux because of the UEFI secure boot system. I have just obtained my first laptop that contains Windows 8 and therefore my first laptop with UEFI and secure boot enabled. The hardware