AI. Games. Hacking. Art. Privacy & Security. History. Why are we hypnotised by tech? Go 8 Bit DLC on UKTV Play. Google may have just ushered in an era of ‘quantum supremacy’ Where does all the e-waste go? A pile of electronic waste on a roadside in Guiyu. 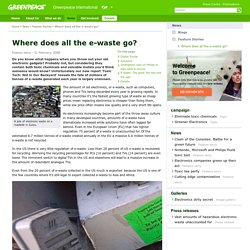 The amount of old electronics, or e-waste, such as computers, phones and TVs being discarded every year is growing rapidly. In many countries it's the fastest growing type of waste as cheap prices mean replacing electronics is cheaper than fixing them, while low price often means low quality and a very short life spans. As electronics increasingly become part of the throw away culture in many developed countries, amounts of e-waste have dramatically increased while solutions have often lagged far behind.

Even in the European Union (EU) that has tighter regulation 75 percent of e-waste is unaccounted for. Google fights deepfakes by releasing 3,000 deepfakes. DIY Spring Cable Support - To prevent cable damage. Future - The last places on Earth without the internet. It can be easy to forget what life was like before the internet. 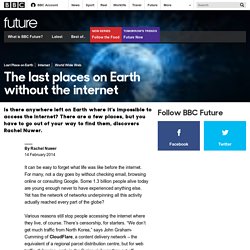 For many, not a day goes by without checking email, browsing online or consulting Google. Some 1.3 billion people alive today are young enough never to have experienced anything else. Yet has the network of networks underpinning all this activity actually reached every part of the globe? Loon. Jaron Lanier's Homepage. BBC Click 1000: Interactive Special. "Hello, World!" program. Traditional beginners' computer program A "Hello, World! 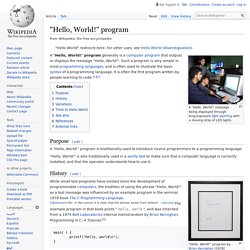 " message being displayed through long-exposure light painting with a moving strip of LED lights A "Hello, World! " program generally is a computer program that outputs or displays the message "Hello, World! ". Such a program is very simple in most programming languages, and is often used to illustrate the basic syntax of a programming language. Purpose[edit] Purism and e Foundation take on the smartphone duopoly. Dark patterns are everywhere, new research shows. 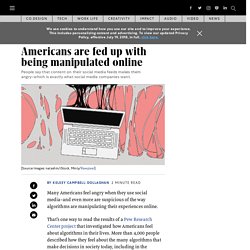 Here's A Supercut Of Trump Trying To Talk About Technology. Top 5 Call for Code solutions unveiled – IBM Developer. Home - Call for Code. IBM’s Call for Code Prize Goes to a Team With ‘Clusterducks’ Steve Jobs would never do that! “No one hates Apple like Apple fans.” 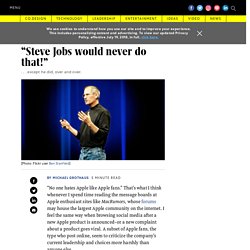 That’s what I think whenever I spend time reading the message boards at Apple enthusiast sites like MacRumors, whose forums may house the largest Apple community on the internet. I feel the same way when browsing social media after a new Apple product is announced–or a new complaint about a product goes viral. A subset of Apple fans, the type who post online, seem to criticize the company’s current leadership and choices more harshly than anyone else.

In particular, after every product announcement you’ll find dozens of posts from Apple fans alleging that “Steve Jobs would never have done that!” YouTube, Reddit, and the Ever-Tightening Orthodoxy of the Rabbit Hole. Quantum Computing Expert Explains One Concept in 5 Levels of Difficulty. Mozilla challenges educators to integrate ethics into STEM. How do you address such monumental societal changes? 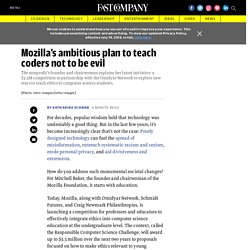 For Mitchell Baker, the founder and chairwoman of the Mozilla Foundation, it starts with education. Today, Mozilla, along with Omidyar Network, Schmidt Futures, and Craig Newmark Philanthropies, is launching a competition for professors and educators to effectively integrate ethics into computer science education at the undergraduate level. The context, called the Responsible Computer Science Challenge, will award up to $3.5 million over the next two years to proposals focused on how to make ethics relevant to young technologists. “You can’t take an ethics course from 50 or even 25 years ago and drop it in the middle of a computer science program and expect it to grab people or be particularly applicable,” Baker says.

“We are looking to encourage ways of teaching ethics that make sense in a computer science program, that make sense today, and that make sense in understanding questions of data.” The first “social network” of brains lets three people transmit thoughts to each other’s heads. The ability to send thoughts directly to another person’s brain is the stuff of science fiction. 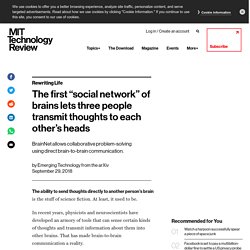 Apple tight-lipped on content-blocking limits for iOS apps. For people trying to avoid online distractions on their smartphones and computers, a service called Freedom has offered the ability to block certain websites and apps at certain times. 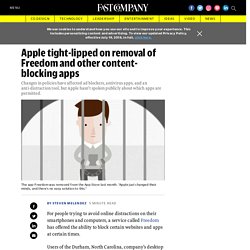 Users of the Durham, North Carolina, company’s desktop and smartphone apps or browser extensions can choose to block Facebook during business hours, filter out YouTube after dinner, or lock out the entire internet during a busy workday. But late last month, the company announced that the app had been removed from the iOS App Store, under Apple policies that limit how apps can filter content in other apps. Freedom’s iOS app used the platform’s support for virtual private network technology to block access to internet addresses associated with particular apps. For instance, the app could block connections to facebook.com from the Facebook app or Safari, or it could block addresses used by streaming platforms to serve up content.

Ink Cartridges Are A Scam. Quantum computing is almost ready for business, says Rigetti. Quantum computing–which harnesses the peculiar physics of subatomic scale–long appeared to be a technology of the far future, maybe decades away. 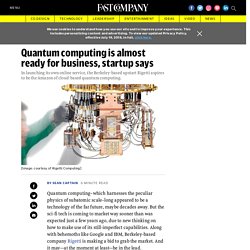 But the sci-fi tech is coming to market way sooner than was expected just a few years ago, due to new thinking on how to make use of its still-imperfect capabilities. Along with behemoths like Google and IBM, Berkeley-based company Rigetti is making a bid to grab the market. Why its not impossible to police the dark web - Information Age. The challenge for law enforcement will be how to find the evidence needed in all this data to successfully find and prosecute the heads of these criminal networks The National Crime Agency (NCA) and GCHQ have created a joint taskforce to target the serious crime rings operating on the ‘dark web’, starting with the perpetrators responsible for the abuse of children online. 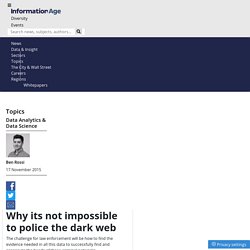 This follows David Cameron’s stark warning last year that the dark web was increasingly being used by paedophiles, and sends a message that there will soon be nowhere for these criminals to hide. Estimated to be about 1,000 times larger than the web searchable by Google, the dark web is publically visible but cannot be found via using search engines. The IP addresses of the servers that run the websites are hidden, so it is very difficult to work out who is behind the sites. Regulating Google search is a dumb idea that could actually happen. Curiositystream. How smart TVs are getting quite smart about you. Google, you auto-complete me. Zuck Would Have Broken Steve Jobs’s Heart. Enigma Machine Emulator. Flat Shoes? For Emoji? Groundbreaking. “What Have We Done?”: Silicon Valley Engineers Fear They've Created a Monster.

Profit, not free speech, governs media companies' decisions on controversy. For decades, U.S. media companies have limited the content they’ve offered based on what’s good for business. The decisions by Apple, Spotify, Facebook and YouTube to remove content from commentator Alex Jones and his InfoWars platform follow this same pattern. My research on media industries makes clear that government rules and regulations do little to limit what television shows, films, music albums, video games and social media content are available to the public.

Business concerns about profitability are much stronger restrictions. Movies are given ratings based on their content not by government officials but by the Motion Picture Association of America, an industry group. The Long, Remarkable History of the GIF. The Best Keyboard Ever Is Back. Apple’s iPhone Gravy Train. Computers Made of Genetic Material Will Revolutionize Our World. The future is ear: Why “hearables” are finally tech’s next big thing. Facebook has become exhausting. Why are we still on it? Silicon Valley, from 'heart’s delight' to toxic wasteland. There was a time when California’s Santa Clara Valley, bucolic home to orchards and vineyards, was known as “the valley of heart’s delight.” The same area was later dubbed “Silicon Valley,” shorthand for the high-tech combination of creativity, capital and California cool.

Why the very idea of ‘screen time’ is muddled and misguided. Why the Essential Phone Is Just More of the Same. Kaboom! Russian Drone With Thermite Grenade Blows Up a Billion Dollars of Ukranian Ammo. Where in the world is the most advanced e-government? Estonia. Here’s the real danger that tech monopolies pose to our society. These 6 pioneering women helped create modern computers.

Dame Stephanie Shirley. Why algorithms can’t save us from trolls and hate speech. Pete Ryan In the early days of the popularization of the Internet, there was a debate about whether to make online digital experiences seem either casual and weightless or serious with costs and consequences. Quantum computing technology. Resisting technology, Appalachian style. Download your data - Google Account Help. How can I download a copy of my Facebook data? Storing data in DNA is a lot easier than getting it back out. Mozilla's Internet Health Report Diagnoses Life Online. Blaise Agüera y Arcas: How PhotoSynth can connect the world's images. Kevin Kelly: The next 5,000 days of the web. The Covert Opt-In // Michael Bromley: Web Developer. Tested Visits the Shenzhen Electronics Market! Flight of the Bumblebee - GLOCKENSPIEL. Axel-F Performed by Robot Glockenspiel and Hacked Hard Drives. The Animals House of the Rising Sun Old School Computer Remix. Toys From The Thrift Shop Cover Macklemore & Ryan Lewis - THRIFT SHOP.

Robot Band The Bit-52's cover Private Idaho by The B-52's. Robot Band covers Maroon 5 - Moves Like Jagger featuring Stephen Hawkings DECtalk Vocals. Gotye - Somebody That I Used to Know - Old School Computer Remix. Shenzhen: City of the Future. The high-tech life of China’s Silicon Valley. Inside Facebook's Hellish Two Years—and Mark Zuckerberg's Struggle to Fix it All. Amiga Computer - The Rise and Fall of Amiga. Man Resolves To Read The Wikipedia Tabs He Already Has Open Before Starting New Ones.