Infrastructure as a Service 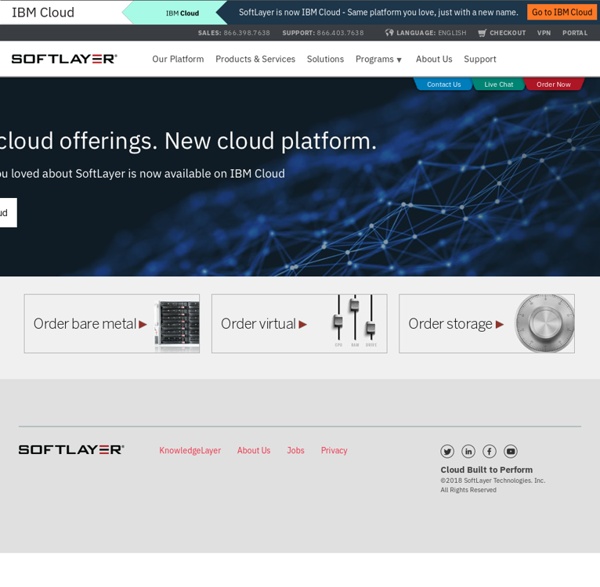 Dedicated servers provide robust performance, reliability and security. Deployed in hours, not days, each SoftLayer dedicated server comes with the industry’s most complete selection of services with the opportunity to choose additional hardware upgrades and service options. Cloud servers with advantages like no other cloud service. CloudLayer services provide cloud servers, cloud storage and a content delivery network built on our on-demand data center services. Full integration with dedicated servers and local storage options allow maximum flexibility for your applications. We've created the Infrastructure as a service platform on which you'll create tomorrow.

Cloud computing Cloud computing metaphor: For a user, the network elements representing the provider-rendered services are invisible, as if obscured by a cloud. Cloud computing is a computing term or metaphor that evolved in the late 1990s, based on utility and consumption of computer resources. Cloud computing involves application systems which are executed within the cloud and operated through internet enabled devices. Purely cloud computing does not rely on the use of cloud storage as it will be removed upon users download action. Clouds can be classified as public, private and hybrid.[1][2] Overview[edit] Platform as a service Platform as a service (PaaS) is a category of cloud computing services that provides a computing platform and a solution stack as a service.[1] Along with software as a service (SaaS) and infrastructure as a service (IaaS), it is a service model of cloud computing. In this model, the consumer creates the software using tools and/or libraries from the provider. The consumer also controls software deployment and configuration settings. The provider provides the networks, servers, storage, and other services that are required to host the consumer's application.[2] PaaS offerings facilitate the deployment of applications without the cost and complexity of buying and managing the underlying hardware and software and provisioning hosting capabilities.[3]

Cloud computing In common usage, the term "the cloud" is essentially a metaphor for the Internet.[1] Marketers have further popularized the phrase "in the cloud" to refer to software, platforms and infrastructure that are sold "as a service", i.e. remotely through the Internet. Typically, the seller has actual energy-consuming servers which host products and services from a remote location, so end-users don't have to; they can simply log on to the network without installing anything. The major models of cloud computing service are known as software as a service, platform as a service, and infrastructure as a service. These cloud services may be offered in a public, private or hybrid network.[2] Google, Amazon, IBM, Oracle Cloud, Salesforce, Zoho and Microsoft Azure are some well-known cloud vendors.[3] Advantages[edit] The cloud also focuses on maximizing the effectiveness of the shared resources.

Heroku History[edit] The June 2012 North American derecho caused many applications hosted by Heroku to go offline. The service outage lasted less than 24 hours.[11] Joyent Joyent Inc is a software and services company based in San Francisco, California. The company specializes in application virtualization and cloud computing. Services[edit] JoyentCloud, Joyent’s hosting unit, is designed to compete with Amazon's EC2 cloud[1] and offers infrastructure as a service (IaaS) and platform as a service (PaaS) for large enterprises.

Squid (software) Squid was originally designed to run on Unix-like systems. The Windows port was maintained up to version 2.7 but more current versions are not being developed.[5] Released under the GNU General Public License, Squid is free software. Squid was originally developed as the Harvest object cache,[6] part of the Harvest project at the University of Colorado Boulder.[7][8] Further work on the program was completed at the University of California, San Diego and funded via two grants from the National Science Foundation.[9] Duane Wessels forked the "last pre-commercial version of Harvest" and renamed it to Squid to avoid confusion with the commercial fork called Cached 2.0, which became NetCache.[10][11] Squid version 1.0.0 was released in July 1996.[10] Squid is now developed almost exclusively through volunteer efforts.

LiveJournal LiveJournal was started on April 15, 1999 by American programmer Brad Fitzpatrick as a way of keeping his high school friends updated on his activities.[8] In January 2005, blogging software company Six Apart purchased Danga Interactive, the company that operated LiveJournal, from Fitzpatrick. Six Apart sold LiveJournal to Russian media company SUP Media in 2007, but continued to develop the site by the San Francisco-based company LiveJournal, Inc.[9] In January 2009 LiveJournal laid off some employees and moved product development and design functions to Russia.[10][11] Features[edit]

Git Now that you have Git on your system, you’ll want to do a few things to customize your Git environment. You should have to do these things only once; they’ll stick around between upgrades. You can also change them at any time by running through the commands again.