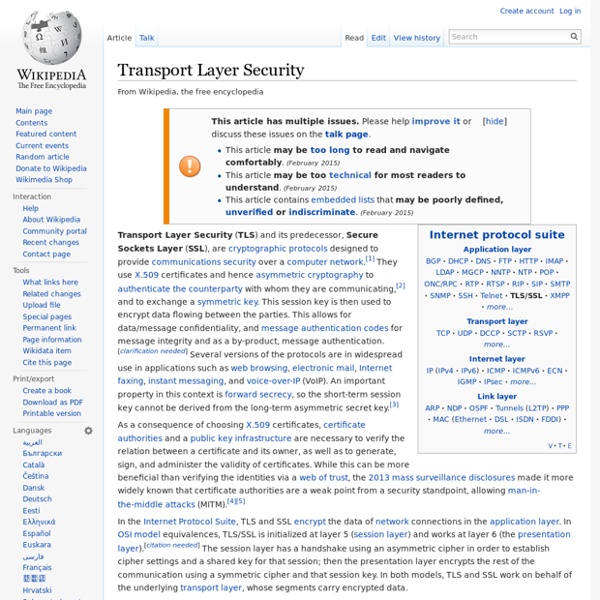 Transport Layer Security (TLS) and its predecessor, Secure Sockets Layer (SSL), are cryptographic protocols designed to provide communications security over a computer network.[1] They use X.509 certificates and hence asymmetric cryptography to authenticate the counterparty with whom they are communicating,[2] and to exchange a symmetric key. This session key is then used to encrypt data flowing between the parties. This allows for data/message confidentiality, and message authentication codes for message integrity and as a by-product, message authentication.[clarification needed] Several versions of the protocols are in widespread use in applications such as web browsing, electronic mail, Internet faxing, instant messaging, and voice-over-IP (VoIP). An important property in this context is forward secrecy, so the short-term session key cannot be derived from the long-term asymmetric secret key.[3] Description[edit] History and development[edit] Secure Network Programming[edit] Dr. Notes

Uniform resource locator A uniform resource locator, abbreviated as URL (also known as web address, particularly when used with HTTP), is a specific character string that constitutes a reference to a resource. In most web browsers, the URL of a web page is displayed on top inside an address bar. An example of a typical URL would be " A URL is technically a type of uniform resource identifier (URI), but in many technical documents and verbal discussions, URL is often used as a synonym for URI, and this is not considered a problem.[1] URLs are commonly used for web pages (http), but can also be used for file transfer (ftp), email (mailto) and many other applications (see URI scheme for list). URLs are specified in RFC 3986 (2005), and in a WHATWG URL Living Standard.[2] History[edit] Secure copy The term SCP can refer to one of two related things, the SCP protocol or the SCP program. SCP protocol[edit] How it works[edit] Normally, a client initiates an SSH connection to the remote host, and requests an SCP process to be started on the remote server. The remote SCP process can operate in one of two modes: source mode, which reads files (usually from disk) and sends them back to the client, or sink mode, which accepts the files sent by the client and writes them (usually to disk) on the remote host. For most SCP clients, source mode is generally triggered with the -f flag (from), while sink mode is triggered with -t (to).[2] These flags are used internally and are not documented outside the SCP source code.

Transport Layer Protection Cheat Sheet Last revision (mm/dd/yy): 09/29/2018 This cheat sheet provides a simple model to follow when implementing transport layer protection for an application. Although the concept of SSL is known to many, the actual details and security specific decisions of implementation are often poorly understood and frequently result in insecure deployments. OpenSSL History of the OpenSSL project[edit] The OpenSSL project was founded in 1998 to invent a free set of encryption tools for the code used on the Internet. As of 2014 two thirds of all webservers use it. 10 Immutable Laws of Security Administration By Scott Culp November 2000 We recently published the 10 Immutable Laws of Security, a listing of ten facts of life regarding computer security. We realized that administrators have their own set of immutable laws, one that's entirely separate from the list for users.

URI scheme URI schemes should be registered with IANA, although non-registered schemes are used in practice. RFC 4395 describes the procedures for registering new URI schemes. Generic syntax[edit] Internet standard STD 66 (also RFC 3986) defines the generic syntax to be used in all URI schemes. New for Internet Explorer: HTTP/2 Support As part of the Windows 10 Technical Preview, Internet Explorer will offer HTTP/2 support, performance improvements to the Chakra JavaScript engine, and a top-level domains parsing algorithm based on publicsuffix.org. HTTP/2 is a new standard by the Internet Engineering Task Force. There are two components: Hypertext Transfer Protocol version 2 and HPACK - Header Compression for HTTP/2. Networking 101: Transport Layer Security (TLS) - High Performance Browser Networking (O'Reilly) Introduction The SSL protocol was originally developed at Netscape to enable ecommerce transaction security on the Web, which required encryption to protect customers’ personal data, as well as authentication and integrity guarantees to ensure a safe transaction. To achieve this, the SSL protocol was implemented at the application layer, directly on top of TCP (Figure 4-1), enabling protocols above it (HTTP, email, instant messaging, and many others) to operate unchanged while providing communication security when communicating across the network. When SSL is used correctly, a third-party observer can only infer the connection endpoints, type of encryption, as well as the frequency and an approximate amount of data sent, but cannot read or modify any of the actual data.

How to Use the Traceroute Command Traceroute is a command which can show you the path a packet of information takes from your computer to one you specify. It will list all the routers it passes through until it reaches its destination, or fails to and is discarded. In addition to this, it will tell you how long each 'hop' from router to router takes. In Windows, select Start > Programs > Accessories > Command Prompt. This will give you a window like the one below. Understanding Key Differences Between FTP, FTPS and SFTP Understanding Key Differences Between FTP, FTPS and SFTP Posted by Van Glass on Mon, Jan 02, 2012 @ 11:56 AM Perhaps the most common protocols used in file transfer today are FTP, FTPS and SFTP. While the acronyms for these protocols are similar, there are some key differences among them, in particular how data are exchanged, the level of security provided and firewall considerations. Learning these key differences can help you when choosing a file transfer protocol or troubleshooting common connection issues. The FTP (File Transfer Protocol) protocol has been around for quite some time.

Lead time A lead time is the latency (delay) between the initiation and execution of a process. For example, the lead time between the placement of an order and delivery of a new car from a manufacturer may be anywhere from 2 weeks to 6 months. In industry, lead time reduction is an important part of lean manufacturing. Computer and network protocols; TCP / IP - OSI The Defense Advance Research Projects Agency (DARPA) originally developed Transmission Control Protocol / Internet Protocol (TCP / IP) as a mechanism for connecting different networks in the U.S. Department of Defense (DoD) in a way that communication can 'survive' in any conditions. Internet, international, very widespread international network (WAN) using TCP / IP protocol into an environment of institutional and government institutions worldwide. This protocol suite is widely distributed in commercial and private networks.