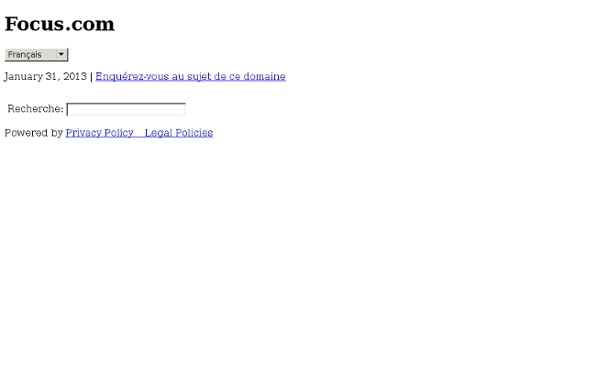 Harnessing the Power of Feedback Loops In 2003, officials in Garden Grove, California, a community of 170,000 people wedged amid the suburban sprawl of Orange County, set out to confront a problem that afflicts most every town in America: drivers speeding through school zones. Local authorities had tried many tactics to get people to slow down. They replaced old speed limit signs with bright new ones to remind drivers of the 25-mile-an-hour limit during school hours. Police began ticketing speeding motorists during drop-off and pickup times. But these efforts had only limited success, and speeding cars continued to hit bicyclists and pedestrians in the school zones with depressing regularity. So city engineers decided to take another approach.

The Management Myth - Magazine During the seven years that I worked as a management consultant, I spent a lot of time trying to look older than I was. I became pretty good at furrowing my brow and putting on somber expressions. Those who saw through my disguise assumed I made up for my youth with a fabulous education in management. They were wrong about that. I don’t have an M.B.A. I have a doctoral degree in philosophy—nineteenth-century German philosophy, to be precise. 25 Useful Brainstorming Techniques by Celes on Feb 9, 2009 | ShareThis Email This Post Caught with a problem you cannot solve? 9 Things That Motivate Employees More Than Money The ability to motivate employees is one of the greatest skills an entrepreneur can possess. Two years ago, I realized I didn’t have this skill. So I hired a CEO who did. Josh had 12 years in the corporate world, which included running a major department at Comcast. I knew he was seasoned, but I was still skeptical at first.

5 things that destroy a company’s value Imagine this: You build a tech company with lots of happy customers and an enterprise value of 1.0 times revenue. So you challenge the sales team, the company doubles its top-line revenue and achieves an enterprise value of .75 times revenue. Or less. This may sound ridiculous. But it happens all the time. Take a look at Cisco over the last decade. Using the 4 D's to find more meaning and purpose in life Many people desire more meaning, purpose, and calling in life. Spiritual and religious perspectives help to provide at least some answers to questions of meaning, purpose, and a sense of calling and vocation. Many people find that their spiritual and religious beliefs, traditions, and community help to frame these existential questions and issues in a way that provides direction as well as solace and peace of mind. My colleague at Santa Clara University, Professor Diane Dreher, and I recently published a chapter in an edited book of mine entitled, " (2007, Praeger/Greenwood) that offers a "calling protocol." It uses the principles from the spiritual exercises of St. Ignatius (founder of the Jesuits) to help people develop a better sense of vocation, calling, and purpose in their lives.

Project Management Tools The purpose of this article is to discuss a variety of project management tools that are available to project managers. The specific tools that will be discussed are a budget, work breakdown structure (WBS), network diagram, and risk management plan. Included will be descriptions of these tools, along with a brief explanation of the relationship of these tools to applications that automate these processes. Budget

Facebook vs Twitter for Business to Business (B2B) Networking Whether you have a brick and mortar store, or operate an e-commerce store, online networking can really help grow your business. One of the effective ways to network online is by participating on a social networking site such as Facebook or Twitter. With a limited amount of time to invest in online business to business networking, should you spend your time and energy building a large following on Twitter, or Facebook? To help you make a more informed decision here are a few strengths of the two social networks: Facebook Strengths

10 Things Great Bosses Do Every Day We’ve all heard the adage, “People don’t leave bad jobs; they leave bad bosses.” It makes great fodder for after-work gripe sessions, but is there really any data to back the claim up? As it turns out, there’s a ton. In one study, 61 percent of those working for bad bosses said they were looking for another job, while just 27 percent of those working for good bosses were considering alternate employment.