Study: There Are Instructions for Teaching Critical Thinking 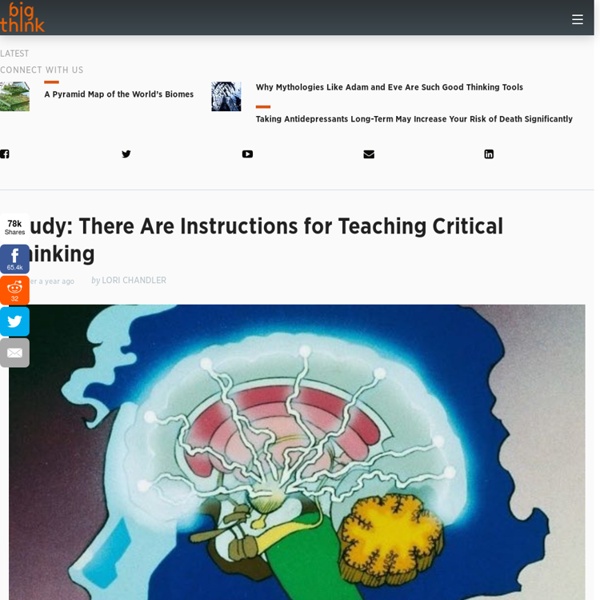 Whether or not you can teach something as subjective as critical thinking has been up for debate, but a fascinating new study shows that it’s actually quite possible. Experiments performed by Stanford's Department of Physics and Graduate School of Education demonstrate that students can be instructed to think more critically. It’s difficult to overstate the importance of critical-thinking skills in modern society. The ability to decipher information and interpret it, offering creative solutions, is in direct relation to our intellect.2 The study took two groups of students in an introductory physics laboratory course, with one group (known as the experimental group) given the instruction to use quantitative comparisons between datasets and the other group given no instruction (the control group). Comparing data in a scientific manner; that is, being able to measure one’s observations in a statistical or mathematical way, led to interesting results for the experimental group.

What are the 21st-century skills every student needs? The gap between the skills people learn and the skills people need is becoming more obvious, as traditional learning falls short of equipping students with the knowledge they need to thrive, according to the World Economic Forum report New Vision for Education: Fostering Social and Emotional Learning Through Technology. Today's job candidates must be able to collaborate, communicate and solve problems – skills developed mainly through social and emotional learning (SEL). Combined with traditional skills, this social and emotional proficiency will equip students to succeed in the evolving digital economy.

How PowerPoint is killing critical thought I still remember the best lecture I ever attended. It was part of a joint series offered by the English and philosophy departments in my first term at university and, given that the subject was Sartre’s Being and Nothingness, should have been the dullest event in Christendom that night. But it wasn’t. The lecturer, Thomas Baldwin, had a deceptively simple style: he would write a proposition on the blackboard facing us and gaze at it for a moment, like a medium beckoning a spirit. Then he would turn and smile, and start to explain.

50 Questions To Help Students Think About What They Think click 2x contributed by Lisa Chesser Using the right questions creates powerful, sometimes multiple answers and discussions. Aristotle said that he asked questions in response to other people’s views, while Socrates focused on disciplined questioning to get to the truth of the matter. Ultimately questions spark imagination, conjure emotions, and create more questions. Why Students Forget—and What You Can Do About It Teachers have long known that rote memorization can lead to a superficial grasp of material that is quickly forgotten. But new research in the field of neuroscience is starting to shed light on the ways that brains are wired to forget—highlighting the importance of strategies to retain knowledge and make learning stick. In a recent article published in the journal Neuron, neurobiologists Blake Richards and Paul Frankland challenge the predominant view of memory, which holds that forgetting is a process of loss—the gradual washing away of critical information despite our best efforts to retain it. According to Richards and Frankland, the goal of memory is not just to store information accurately but to “optimize decision-making” in chaotic, quickly changing environments. In this model of cognition, forgetting is an evolutionary strategy, a purposeful process that runs in the background of memory, evaluating and discarding information that doesn’t promote the survival of the species.

The 12 cognitive biases that prevent you from being rational The human brain is capable of 1016 processes per second, which makes it far more powerful than any computer currently in existence. But that doesn't mean our brains don't have major limitations. The lowly calculator can do math thousands of times better than we can, and our memories are often less than useless — plus, we're subject to cognitive biases, those annoying glitches in our thinking that cause us to make questionable decisions and reach erroneous conclusions. Here are a dozen of the most common and pernicious cognitive biases that you need to know about. Before we start, it's important to distinguish between cognitive biases and logical fallacies. A logical fallacy is an error in logical argumentation (e.g. ad hominem attacks, slippery slopes, circular arguments, appeal to force, etc.).

How much money teachers earn around the world How much do educators get paid for their work? We asked 16 public school teachers in communities around the world — from Kildare to Kathmandu, Johannesburg to Oslo — to tell us what they earned in one month (and how they spent it). Here’s what they said: Toronto, Canada Tell us about yourself: I’m 32 years old; I’m a middle school Special Education teacher working for the Toronto District School Board. I’ve been teaching kids with autism for seven years.

Hyperfocus: The Flip Side of ADHD? Mark had trouble believing his son could have ADHD. Sure, he was unusually active, and his pre-school teachers complained that he fluttered around the room like a butterfly when other kids were engaged in activities. But there was also Andy’s ability to focus intensely on certain activities, like fishing or watching a movie.

Finland Will Become The First Country In The World To Get Rid Of All School Subjects Finland’s education system is considered one of the best in the world. In international ratings, it’s always in the top ten. However, the authorities there aren’t ready to rest on their laurels, and they’ve decided to carry through a real revolution in their school system. Finnish officials want to remove school subjects from the curriculum.

How to Be an Individual in Age of the Echo Chamber by Steven Mazie By BRUCE PEABODY, guest blogger Last week, we considered how M.T. Anderson’s novel Feed lays out a set of fears about today’s electronic culture and its impact on how we think, interact and develop our moral selves. Anderson voices widespread anxieties about the internet age, but his book is rather short on solutions and hope. Today’s post proposes that we train our gazes to the 19th century, and the political and social philosophy of John Stuart Mill, in order to search for ways out of Anderson’s dystopian landscape.

Misattributed quotes and their surprising originators In the course of researching the history of emotional intelligence, I stumbled across an origin story that went all the way back to Plato. The classical Greek philosopher apparently wrote, “All learning has an emotional base.” Except that he never said it, according to Christopher Golis, a coach specializing in emotional intelligence. Instead, Golis’s digging unearthed no attribution to Plato before 1997, “after which it’s copied promiscuously in various inspirational/psychological books–never with source identification–and then on to various quotation websites.” It’s easy to see how misinformation like this can spread virally, so I couldn’t help but wonder, do all those inspirational quotes we see liberally hashtagged for #MotivationMonday or #WidsomWednesday really exist?