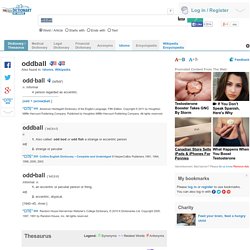 [ˈɒdˌbɔːl] n & adj (fam) → eccentrico/a. Oddball. The proto-Beatnik and one of the main characters in the famous 1970 war/comedy Kelly's Heroes. 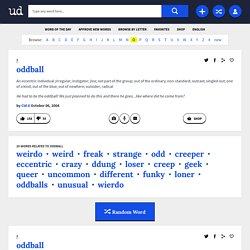 Oddball is self explanatory. He is a laid-back tank crewman with an optimistic often misunderstood personality. He enjoys barking like a dog. His voice always sounds stoned. "Why don't you knock it off with them negative waves? "To a New Yorker like you, a hero is some type of weird sandwich, not some nut who takes on three tigers" ----Sgt Oddball Oddball: "I'm drinking wine and eating cheese, and catching some rays, you know. 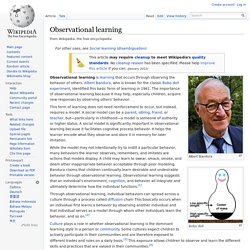 Albert Bandura, who is known for the classic Bobo doll experiment, identified this basic form of learning in 1961. The importance of observational learning because it may help, especially children, acquire new responses by observing others' behavior. This form of learning does not need reinforcement to occur, but instead, requires a model. A social model can be a parent, sibling, friend, or teacher, but—particularly in childhood—a model is someone of authority or higher status.

A social model is significantly important in observational learning because it facilitates cognitive process behavior. While the model may not intentionally try to instill a particular behavior, many behaviors the learner observes, remembers, and imitates are actions that models display. Culture plays a role in whether observational learning is the dominant learning style in a person or community. Stages[edit] Critical thinking web. Critical thinking is the ability to think clearly and rationally about what to do or what to believe. 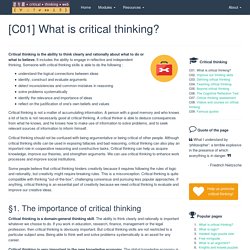 It includes the ability to engage in reflective and independent thinking. Someone with critical thinking skills is able to do the following : understand the logical connections between ideasidentify, construct and evaluate argumentsdetect inconsistencies and common mistakes in reasoningsolve problems systematicallyidentify the relevance and importance of ideasreflect on the justification of one's own beliefs and values Critical thinking is not a matter of accumulating information. A person with a good memory and who knows a lot of facts is not necessarily good at critical thinking.