This Is Modern Art / 1 of 6 / I Am a Genius / 1999. The new shock of the New (Documentary about contemporary art by Robert Hughes) Behind the Banksy Stunt. Paul Smith the Eclectic Collector. Brilliant Ideas: Artist Grayson Perry. Grayson Perry 'The Most Popular Art Exhibition Ever!' - BBC London News. Grayson Perry at Serpentine Galleries: 'The Most Popular Art Exhibition Ever!' Basic Visual Analysis. Introductory video - How to analyse art. How to Critique Your Own Artwork. PBS Digital Studios. GCSE Bitesize: Annotating your work. Salvador Dalí: A Master of the Modern Era. Documentary for educational purposes only.

Pop art is about access, but will it bring big crowds to the AGNSW? - Watch - ABC Arts. Posted: Nothing says pop art like Any Warhol’s 1962 Campbell Soup Cans. 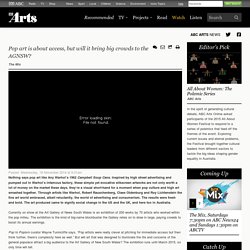 Inspired by high street advertising and pumped out in Warhol’s infamous factory, these simple yet evocative silkscreen artworks are not only worth a lot of money on the market these days, they’re a visual short-hand for a moment when pop culture and high art smashed together. This is not a review: Pop to Popism at AGNSW. Last week, we had the pleasure of seeing Pop to Popism at the Art Gallery of New South Wales. 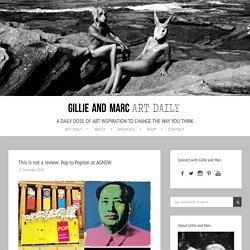 The exhibition has been open for about a month, and the second we walked through the door we wondered why it took us so long to get there! We’ve always been enormous fans of pop art in general, and have always found artists from the 60s and 70s particularly inspiring. Pop to Popism has been called a blockbuster, and we couldn’t agree more! LOOK - Byron Spencer reviews his favourite portrait in the MCA's Chuck Close show - Two Thousand. So far we've sent Katherine Sabbath and Tyson Koh off to the MCA to find their favourite portrait in the ‘Chuck Close: Prints, Process and Collaboration’. 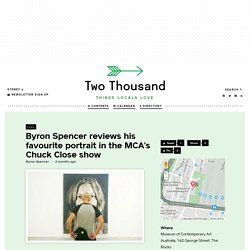 This week we've got Byron Spencer, photographer, fashion columnist and the mind behind the Spencer Not Spencer blog. Admiring Chuck Close's work in real life is quite daunting as a photographer, leading me to the sense that I now need to work a bit harder creatively! His daguerreotype photos alone are remarkable and inspiring, but to him, they are merely the base and initial inspiration of what would be independently (and in other times collaboratively) transformed into mammoth-sized heads of all types of mediums.

To see Chuck Close's work in detail, en masse and in a context of the period, the practice and his physical state (from 1988 he was in a wheelchair) is pretty crazy. Remember Magic Eye books? Something about this Chuck Close exhibition reminded me of those Magic Eye books as a kid. LOOK - Nakkiah Lui reviews 'Pop to popism' at AGNSW, takes Tinder date - Two Thousand. You may have seen Nakkiah Lui starring in one of the best TV shows of the year, ABC's Black Comedy. 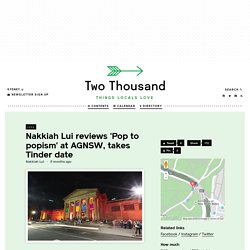 Maybe you've seen her fighting the good fight for Australia, arguing with Miranda Devine on Twitter. She's one of our heroes of 2014, so we asked the Sydney-based comedian/playwright to review the 'Pop to popism' exhibition at Art Gallery of NSW. She decided she would invite her Tinder date along too. Pop to Popism at AGNSW. With over 200 works by some 70 of the genre’s most well known artists, POP TO POPISM at the Art Gallery of NSW is the biggest collection of Pop Art ever to be seen in Australia. 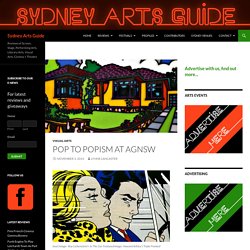 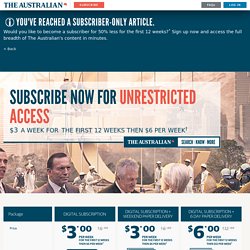 Art movements are strange things: some are decreed by way of a manifesto, their antecedents declared and a purpose proposed. 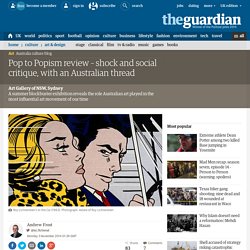 Others are made retrospectively, with entire historical periods yoked under a name that the artists involved never heard themselves, their work understood as part of a historical sweep regardless of individual inspirations or intentions. Either way, the naming and creation of art movements remains mysterious – who is in? Who is out? When did it start – and end? Pop to Popism review (AGNSW, Sydney) Everyone loves pop art now. 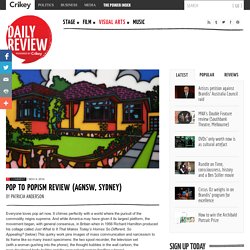 It chimes perfectly with a world where the pursuit of the commodity reigns supreme. And while America may have given it its largest platform, the movement began, with general consensus, in Britain when in 1956 Richard Hamilton produced his collage called Just What Is It That Makes Today’s Homes So Different, So Appealing? (below) This quirky work pins images of mass communication and narcissism to its frame like so many insect specimens: the two spool recorder, the television set (with a woman gushing into the phone), the thought bubbles in the wall cartoon, the over-developed body builder and the near naked woman fondling a breast. Celebrities like Marilyn Monroe, Elvis Presley and Elizabeth Taylor were forever captured in his lurid prints whose multiplications appear like a postage stamp,repeated endlessly, minus the perforations, on a single page.

He did the same thing with disposable objectsthat everyone had access to — like Campbell’s soup cans. Sydney International Art Series. Left: Roy Lichtenstein In the car 1963 (detail), oil and magna on canvas, 172 × 203.5cm, Scottish National Gallery of Modern Art, purchased 1980 © Roy Lichtenstein Foundation. 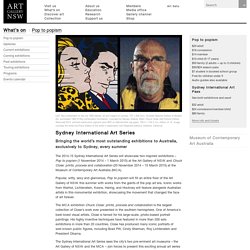 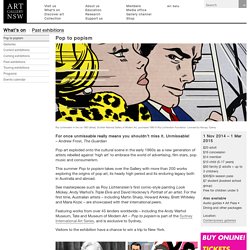 Licensed by Viscopy, Sydney For once unmissable really means you shouldn’t miss it. Unmissable! Pop to Popism - Art Gallery of NSW - Art. Experience the movement that changed art forever, in this blockbuster exhibition of over 200 works by more than 70 artists, from home and abroad “There was that moment in the mid-20th century when the world that people lived in became art,” says Wayne Tunnicliffe. It’s a pretty compelling notion, and it’s the secret behind Pop Art’s phenomenal and enduring profile as an art movement (perhaps only Surrealism rivals it in breadth and depth of influence). Chuck Close: Prints, Process and Collaboration. Portraits from one of America’s best-loved visual artists are now on display at the Museum of Contemporary Art as part of the Sydney International Art Series in Chuck Close: Prints, Process and Collaboration.

Famed for his highly inventive techniques used to paint the human face, Chuck Close is best known for his large-scale, photo-based portrait paintings, producing many iconic portraits of artists, celebrities and other well-known public figures including Brad Pitt, Kate Moss, Lou Reed, Roy Lichtenstein and President Obama. He is also an accomplished printmaker and photographer whose work has been the subject of more than 200 solo exhibitions in more than 20 countries.

Close’s work is characterised by the way he pushes these techniques to their limits and the high level of skill required in the production of these works, with some prints taking up to two years to realise. For more information, visit: www.mca.com.au for details. REVIEW: The Magic of Chuck Close’s Prints at MCA, Sydney. American artist Chuck Close’s singular artistic vision is not something that can be taught, or for that matter explained. In fact, walking through the Sydney Museum of Contemporary Art’s (MCA) amazing 2014 summer blockbuster, “Chuck Close: Prints, Process and Collaboration,” there is a strong sense that Close sees the world differently to everyone else, which is quite possible considering his neurological disorders. Not only is Close dyslexic, he also suffers from prosopagnosia, or “face blindness.” Without wanting to discredit his incredible talent, Close’s unique visual language is at least partly the product of his “disabilities,” which to his credit he uses to his advantage, treating them as challenges rather than obstacles.

Chuck Close rose to fame in the early 1970s with his photorealist portraits, but he is perhaps best known for his more recent “pixelated” mosaic compositions which showcase the unique grid technique that forms the basis of his practice. Peter Duggan's Artoons – Chuck Close. Chuck Close. Presenting Partner: Citi Portraits from one of America’s best-loved visual artists are being shown exclusively in Sydney this summer, as part of the Sydney International Art Series. Chuck Close is an artist noted for his highly inventive techniques used to paint the human face, and is best known for his large-scale, photo-based portrait paintings. He is also an accomplished printmaker and photographer whose work has been the subject of more than 200 solo exhibitions in more than 20 countries.

Chuck Close review – analogue printmaking explores a digital era. Almost the first thing you see when you walk into Chuck Close: Prints, Process and Collaboration at Sydney’s Museum of Contemporary Art is the artist’s painting Bob [1969-70]. Based on a photograph and scaled up to a large canvas, the picture was created using an airbrush and acrylics in stark black and white. It remains as fresh and vital as the day it was completed. Bought by the National Gallery of Australia, and apparently one of its most popular works, the painting is on loan for this large survey exhibition of the American artist’s career. Hanging on an adjacent wall is Self-Portrait [2014], a recent 84-colour woodcut print that provides an overture to the entire show.

Chuck Close prints at Museum of Contemporary Art require so much more than a glance. Model's own: March 2010. A lot of what happens in NYC is insane. It is amazing what people will do to protect their little social bubble, ( without knowing the other person in this case ) including subtle digs that are so obvious to the more sensitive soul. How To Write an Art History Paper for HS or College. You have been assigned an art history paper to write.

The arrangement of Luncheon of the Boating Party represents a relatively new Impressionist movement as well as the changing character of French society due to the industrial revolution. Andrew Graham-Dixon on Klimt. Pieter Bruegel the Elder's Peasant Wedding, c. 1566-69. Van Eyck - The Arnolfini Marriage - Every picture tell's a story.

What makes art valuable? - BBC Documentary HD. Vermeer - Private life of a Masterpiece BBC Documentary about Art. Sister Wendy Becket "Impressions of Light" part 8 of 10 (1) Frida Kahlo, Frieda and Diego Rivera​, 1931. Robert Hughes - *The Mona Lisa Curse. In Our Time: The Museum of Modern Art. Meet The Judges: Andrew Frost. Edvard Munch - paintings, biography, and quotes of Edvard Munch. Inanimate Objects; Year 11 Artworks Blog. 8 Marks (a) Discuss the function of artworks with reference to plates 3a, 3b, 3c 3d and the extract of text. In your response focus on the role and relationship between artworks and their audiences. Art Practice (Task I: Painting)