Three Tools for Teaching Critical Thinking and Problem Solving Skills. As the world economy shifts away from manufacturing jobs and towards service industry and creative jobs, there’s a consensus among parents, educators, politicians and business leaders that it is crucial students graduate into university or the workforce with the ability to identify and solve complex problems, think critically about information, work effectively in teams and communicate clearly about their thinking. 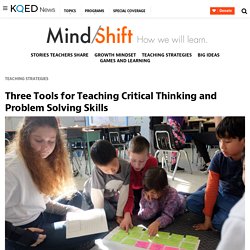 While many teachers agree with this premise, they don’t often know exactly how to teach these skills explicitly, especially because many of the mandates and required curriculum seem to push in the opposite direction. Process-oriented skills are hard to pin down; teachers can see them in certain students, but developing these competencies in students who aren’t already demonstrating them can be tricky. A few teachers in Ontario, Canada have been experimenting with tools they think could make the difference. “I wanted the kids to realize there is no bad answer,” Watt said. Teaching Critical Thinking: The Believing Game & the Doubting Game. By Alan Shapiro "If people don't obey the law, you can't have a decent society. 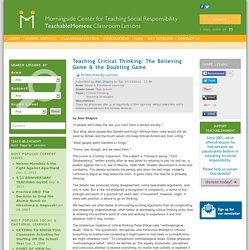 " "But what about people like Gandhi and King? Critical pedagogy: schools must equip students to challenge the status quo. The pedagogy popularised by E.D.Hirsch, and recently promoted by the likes of Civitas, reduces teaching into nothing more than a bleak transmission model of learning. 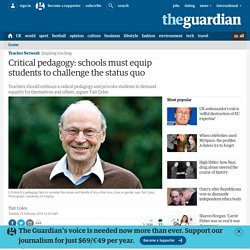 Hirsch's theory focuses on what he calls "cultural literacy". He argues that all students need a "core knowledge" so they can develop into better citizens. In one of his books, he lists various facts, phrases and historical events that he believes all young Americans should be aware of, including the Founding Fathers and Adirondack Mountains. It's Hirsch's belief that if children aren't taught such cultural literacy at home, responsibility for it should lie with schools. Larry Ferlazzo: Critical thinking. I describe it as the ability to seek-out, elicit, and consider different information and various perspectives of situations, fairly weigh the evidence on all sides and how it all connects to existing background knowledge, and then use that process to come to an independent conclusion. 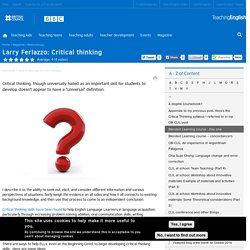 Critical thinking skills have been found to help English Language Learners in language acquisition, particularly through increasing problem-solving abilities, oral communication skills, writing competence, and student motivation. However, teaching critical thinking skills is considered to be a major challenge by many ELL teachers because of a number of issues, including students' lack of vocabulary and, in some cases, students coming from prior school environments where that skill was not promoted.

There are ways to help ELLs, even at the Beginning Level, to begin developing critical thinking skills. Here are some ideas: Interview with Vinícius Nobre: “Critical thinking is not a set of activities.” « Cecilia Nobre ELT Blog. No, Vinicius Nobre is not my cousin or a relative (but we wish we were, it would be so much fun!). 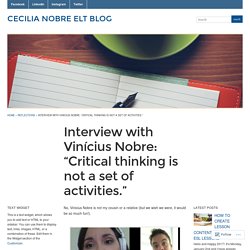 The Nobres finally united Vinícius, aka Vinnie( as he likes to be called), is one of the most important names in ELT in Brazil, being highly respected by the ELT community. 5 Absurd Myths About Critical Thinking - 5 Absurd Myths About Critical Thinking by Karin Hess, Ed.D. ed note: We have published content in the past with references to Webb’s DOK framework, and it is often met with pushback as having been “debunked.” 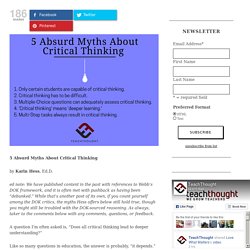 The need of Critical Thinking for the 21st Century Classroom. But How? We all agree that our main aim, as teachers, is to foster the development of the skills and strategies needed for critical thinking to occur in the classroom. 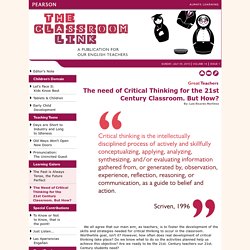 Worthwhile goal, isn’t it? However, how often does real development of critical thinking take place? Do we know what to do so the activities planned help us achieve this objective? Are we ready to be the 21st. Century teachers our 21st.