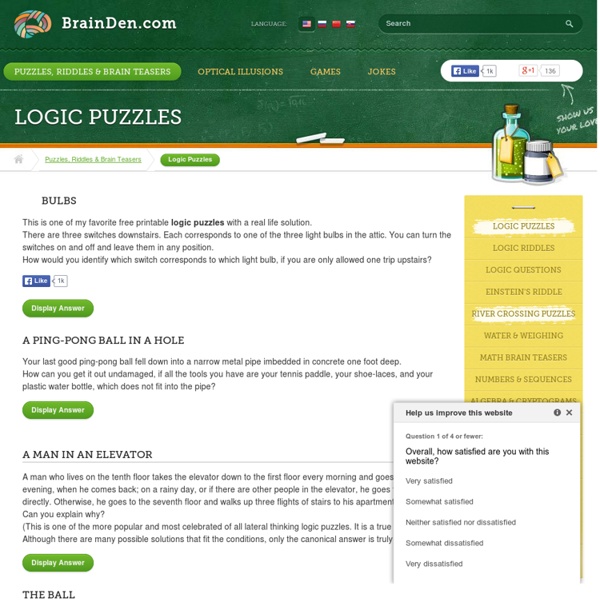 Bulbs This is one of my favorite free printable logic puzzles with a real life solution. There are three switches downstairs. Keep the first bulb switched on for a few minutes. A Ping-Pong Ball in a Hole Your last good ping-pong ball fell down into a narrow metal pipe imbedded in concrete one foot deep. All the tools are random things that are not going to help you. A Man in an Elevator A man who lives on the tenth floor takes the elevator down to the first floor every morning and goes to work. The man is of short stature. The Ball How can you throw a ball as hard as you can and have it come back to you, even if it doesn't bounce off anything? Throw the ball straight up in the air. The Magnet This logic puzzle was published in Martin Gardner's column in the Scientific American. You can hang the iron rods on a string and watch which one turns to the north (or hang just one rod). Virile Microbes A Petri dish hosts a healthy colony of bacteria. The dish will be full at 12:44. Philosopher's Clock Related:  Critical Thinking

Turn your flash drive into a portable PC survival kit If you're using your flash drive as a vehicle for simple file transfers, you’re missing out on one of the single-best roles one of these wee data buckets can fulfill. Indeed, hardcore enthusiasts know that simple flash drives are perfect portable repositories for all the software that can breathe life into an otherwise ailing PC. All the web apps in the world won’t help you when your PC breaks down or falls prey to a particularly nasty piece of malware and refuses connect to the Internet. A properly loaded USB drive, on the other hand, can be a machine saver. And when your grandma calls with a dire PC emergency, you'll be glad to have an always-ready "ninja drive" to slip into your pocket as you run out the door. In this article we’ll show you how to load out a USB drive with everything you need in case of a PC emergency. PortableApps PortableApps maintains a list of hundreds “portable” versions of popular free programs, designed to work without installation. Chrome Portable Malwarebytes

Experts.com - The Premiere Expert Witness Directory All-time Best Games - Walkthrough Guides, Reviews, Discussion, Hints and Tips at JayIsGames Director, game designer and art director Fumito Ueda and producer Kenji Kaido, along with the rest of the development team behind ICO, have broken the mold and released, exclusively for the Playstation 2, what has become the single most original and awe-inspiring gaming experience of my life, Shadow of the Colossus... Cooperate, or backstab? Build, or destroy? All for one and one for all, or every mouse for himself? New to the iPad world is the tower defense game we all love to love, Kingdom Rush HD from Ironhide Games, a port of Kingdom Rush for browsers released not too long ago. Battle for Wesnoth is a free, open-source turn-based strategy game originally designed by David White. Daniel wakes up on the floor of an ancient castle, unable to remember anything but his name... unfortunate for him since his past might be out to get them. Aquaria is a beautifully detailed game of exploration from independent developer Bit Blot. Poor, helpless little... what are those again? Yohoho!

Beautiful Photos of Italy You Never Seen Before Venice – Grand Canal and beautiful Basilica Santa Maria della Salute. Photo by: Iakov Kalinin Colorful Murano islands are linked by bridges in the Venetian Lagoon, northern Italy. Photo by: Chris Chabot Manarola is a small town in northern Italy. Beautiful Tuscany landscapes, central Italy. Hiking in the golden tops of Italian Alps. Sunset in Barrea lake, central Italy. Lake house, South Tyrol, Lake Reschen. Levanzo, island of the Egadi , Sicily. Venice, a city sited on a group of 118 small islands separated by canals and linked by bridges as seen from above. Stunning Dolomites mountains comprises a mountain range in the northern Italian Alps, numbering 18 peaks which rise to above 3,000 metres and cover 141,903 ha. The beauty of Positano, a village and comune on the Amalfi Coast, in Campania, Italy, mainly in an enclave in the hills leading down to the coast.

Welcome to the International Dunhuang Project