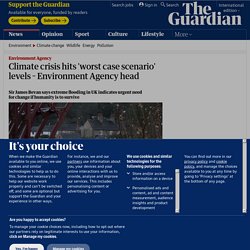 Where 2020's Record Heat Was Felt the Most. 2020 was effectively tied with 2016 for the hottest year on record, as global warming linked to greenhouse gas emissions showed no signs of letting up. 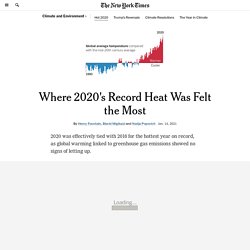 This analysis of global temperatures, by the NASA Goddard Institute for Space Studies and released Thursday, found that 2020 was slightly warmer than 2016. But the difference was insignificant, the institute’s director, Gavin Schmidt, said in an interview. ‘Moving a giraffe is a delicate process’: rising waters threaten Kenya's wildlife. Marooned giraffes, fleeing flamingoes and stranded impalas: in recent years the rising water levels in east Africa’s Rift Valley lakes have become the norm, displacing people, threatening wildlife and submerging schools and hotels. 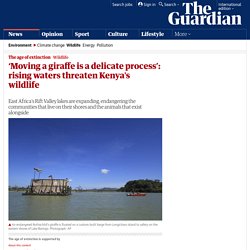 The gradual rise was first noticed 10 years ago but was accelerated by heavy rains in 2019, according to Kenya’s principal secretary in the ministry of environment and forestry, Chris Kiptoo. This year Lake Turkana, the northernmost lake in Kenya, was six metres deeper than usual by November. The International Union for Conservation of Nature (IUCN) has described the threat to the lake as “critical”. (2) Antarctica melting: Journey to the 'doomsday glacier' - BBC News. Amazon fires: Brazilian rainforest burning at record rate, space agency warns.

Media playback is unsupported on your device Brazil's Amazon rainforest has seen a record number of fires this year, according to new data from the country's space research agency. 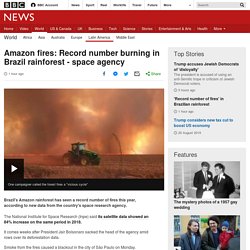 The National Institute for Space Research (Inpe) said its satellite data showed an 84% increase on the same period in 2018. Earth's future is being written in fast-melting Greenland. HELHEIM GLACIER, Greenland (AP) — This is where Earth’s refrigerator door is left open, where glaciers dwindle and seas begin to rise. 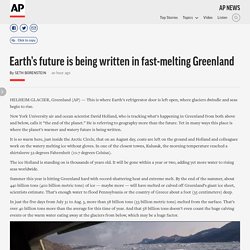 New York University air and ocean scientist David Holland, who is tracking what’s happening in Greenland from both above and below, calls it “the end of the planet.” Climate change: Arctic permafrost now melting at levels not expected until 2090. Permafrost hs begun thawing in the Canadian Arctic more than 70 years early because of climate change, according to new research. A "series of anomalously warm summers” has dramatically accelerated melting rates at three sites despite average annual ground temperatures remaining low. Ponds and hillocks have formed as a result. India heatwave temperatures pass 50 Celsius. 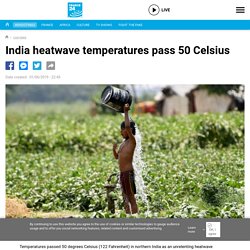 The thermometer hit 50.6 degrees Celsius (123 Fahrenheit) in the Rajasthan desert city of Churu on Saturday, the weather department said. All of Rajasthan suffered in severe heat with several cities hitting maximum temperatures above 47 Celsius. In May 2016, Phalodi in Rajasthan recorded India's highest-ever temperature of 51 Celsius (123.8 Fahrenheit). The Indian Meteorological Department said severe heat could stay for up to a week across Rajasthan, Maharashtra, Madhya Pradesh, Punjab, Haryana and Uttar Pradesh states.

Several deaths from heatstroke have already been recorded. Climate change has contributed to droughts since 1900, and is likely to get worse, says tree-ring study. Using studies of tree rings going back centuries, scientists have unearthed clear evidence that the rise of human-generated greenhouse gases was having an effect on global drought conditions as early as 1900. 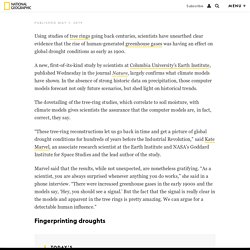 A new, first-of-its-kind study by scientists at Columbia University’s Earth Institute, published Wednesday in the journal Nature, largely confirms what climate models have shown. In the absence of strong historic data on precipitation, those computer models forecast not only future scenarios, but shed light on historical trends. The dovetailing of the tree-ring studies, which correlate to soil moisture, with climate models gives scientists the assurance that the computer models are, in fact, correct, they say. African heatwaves could increase ‘five-fold’ with 3C of global warming.

The number of heatwaves affecting the African continent every year could be five times higher by 2050 as a result of climate change, a new study finds. Global warming of 3C above pre-industrial levels could also alter rainfall patterns across the continent, the research says, which could bring droughts to some countries and an increase in flood risk to others. However, limiting warming to 1.5C – the aspirational goal of the Paris Agreement – could greatly reduce the risk of heatwaves and other climate extremes in Africa, the lead author tells Carbon Brief.

Continental countdown The new study, published in Earth’s Future, focuses on how global warming could impact a range of climate variables that tend to have a large effect on human life, including heatwaves, “hot nights” and rainfall intensity. Non-survivable humid heatwaves for over 500 million people – Climate Guide.

Researchers at MIT warn that if climate change remains unchecked (Business As Usual-scenario = RCP 8.5) over half a billion people will, from 2070 onwards, experience humid heat waves that will kill even healthy people in the shade within 6 hours. 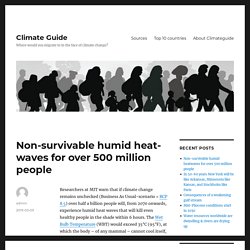 The Wet Bulb Temperature (WBT) would exceed 35°C (95°F), at which the body – of any mammal – cannot cool itself, overheats and shuts down. Three regions were studied: China (2018), South Asia (2017) and the Persian Gulf (2015). The researchers predict (at RCP 8.5) WBT exceeding 35°C about once every decade for the Northern Plains in China (400+ million people), at locations in the Chota Nagpur plateau, northeastern India, and Bangladesh in South Asia (70+ million people).

Persian Gulf regions that would be affected include cities such as Doha, Qatar, Abu Dhabi, Dubai (UAE) and Bandar Abbas (Iran). The total number of people affected will be higher than 0.5 billion. The Uninhabitable Earth: David Wallace-Wells on the horrors of climate change. “It is, I promise, worse than you think.” That was was the first line of David Wallace-Wells’s horrifying 2017 essay in New York magazine about climate change. It was an attempt to paint a very real picture of our not-too-distant future, a future filled with famines, political chaos, economic collapse, fierce resource competition, and a sun that “cooks us.” Wallace-Wells has since developed his terrifying essay into an even more terrifying book, titled The Uninhabitable Earth: Life After Warming. You're Not Allowed to Die Here. 'We've never seen this': massive Canadian glaciers shrinking rapidly.

Scientists in Canada have warned that massive glaciers in the Yukon territory are shrinking even faster than would be expected from a warming climate – and bringing dramatic changes to the region. 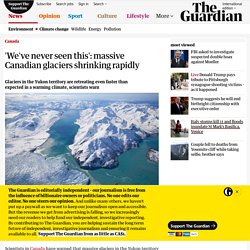 After a string of recent reports chronicling the demise of the ice fields, researchers hope that greater awareness will help the public better understand the rapid pace of climate change. The rate of warming in the north is double that of the average global temperature increase, concluded the US National Oceanic and Atmospheric Administration in its annual Arctic Report Card, which called the warming “unprecedented”. “The region is one of the hotspots for warming, which is something we’ve come to realize over the last 15 years,” said David Hik of Simon Fraser University. “The magnitude of the changes is dramatic.” Previous research found that between 1957 and 2007, the range lost 22% of its ice cover, enough to raise global seal levels by 1.1 millimetres. Stunning Look at the Damage - Florida click 2x on pic & wait a few seconds. Which cities will sink into the sea first? Maybe not the ones you expect. Better scientific understanding of global warming makes the discussion about its geopolitical consequences increasingly urgent. 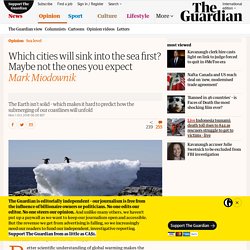 Put simply, there are going to be winners and losers: hotter places and colder places; wetter places and drier places; and, yes, places that disappear under the sea. But the reality is a bit more complicated. In particular, are sea levels going up or down? As New Mexico Reservoirs Hit Bottom, Worries Grow Over the Future — Water Deeply. Europe's heatwave is forcing nuclear power plants to shut down click 2x.

Drought 2018. Temperatures in south-west Europe could break 48C record this weekend. Large parts of southern and western Europe are expected to experience high temperatures this weekend with forecasters warning that thermometers could reach up to 48C in Spain. Holidaymakers bound for the Iberian peninsula have been warned to expect extreme heat, with the chance of the hottest temperatures ever recorded in continental Europe. The current record of 48C in Athens, Greece, in 1977, could be broken as waves of blisteringly hot air sweep in from Africa. Good boy knows just how to beat the heat.

'We have different ways of coping': the global heatwave from Beijing to Bukhara. In Cairo people swim in the Nile and absorb the heat in their homes with sacks of rice. In Tokyo they carry parasols. Farmers in Bukhara fear for their future, while in Jordan, refugees cover themselves with wet towels. Media reaction: The 2018 summer heatwaves and climate change. Canada heatwave: more than 30 deaths reported as extreme weather continues. A heatwave rolling through central and eastern Canada has caused the deaths of more than 30 people, with officials warning that the extreme weather conditions are expected to continue for at least another day.

In Del Mar, a 'Planned Retreat' May Be Only Option as Seas Rise. Dozens of wild horses found dead amid Southwest drought. How climate change may be driving extreme weather. March 27, 2017 —Whether a specific extreme weather event can be linked to climate change rarely gets a straightforward answer from climate scientists or meteorologists. Rising Seas Could Submerge the Oldest English Settlement in the Americas. Sea-level rise this century may threaten Jamestown in Virginia, the first permanent English settlement in the Americas; the Kennedy Space Center in Florida, which launches all of NASA's human spaceflight missions; and the Cape Hatteras Lighthouse in North Carolina, the tallest brick lighthouse in the United States, a new study finds.