6 Ridiculous Lies You Believe About the Founding of America 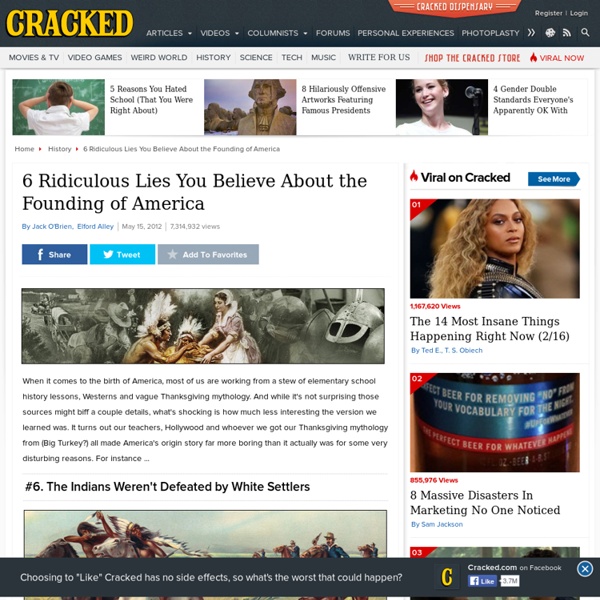 When it comes to the birth of America, most of us are working from a stew of elementary school history lessons, Westerns and vague Thanksgiving mythology. And while it's not surprising those sources might biff a couple details, what's shocking is how much less interesting the version we learned was. It turns out our teachers, Hollywood and whoever we got our Thanksgiving mythology from (Big Turkey?) all made America's origin story far more boring than it actually was for some very disturbing reasons. For instance ... #6. The Myth: Our history books don't really go into a ton of detail about how the Indians became an endangered species. When American Indians show up in movies made by conscientious white people like Oliver Stone, they usually lament having their land taken from them. But if we had to put the whole Cowboys and Indians battle in a Hollywood log line, we'd say the Indians put up a good fight, but were no match for the white man's superior technology. The Truth: #5. #4. Related:  EARTH & • Storia • History / Knowledge

Biblical Marriage Not Defined Simply As One Man, One Woman: Iowa Religious Scholars' Op-Ed A trio of Iowa-based religious scholars penned an op-ed in a local paper this week, reminding readers that despite popular opinion, the Bible does not simply define marriage as between one man and one woman. The joint editorial was written by Hector Avalos, Robert R. Cargill and Kenneth Atkinson and published in the Des Moines Register on Sunday. The men teach at Iowa State University, University of Iowa and University of Northern Iowa, respectively. "The debate about marriage equality often centers, however discretely, on an appeal to the Bible," the authors wrote. The Bible's definition of marriage can be confusing and contradictory, noted the scholars. In an interview with The Huffington Post, Iowa University Professor Robert R. He explained that it is obvious to scholars (and some religious leaders) that the Bible endorses a wide range of relationships. Ultimately, said Cargill, a Biblical "argument against same-sex marriage is wholly unsustainable.

Mass suicide at Pilenai: Lithuanian Defenders Choose Death over Enslavement The Crusades are best known as a series of military campaigns launched by Western European states, and sanctioned by the Roman Catholic Church, aimed at reclaiming the Holy Land from the Muslims. Less well-known, perhaps, are the other wars sanctioned by the papacy, such as the Spanish Reconquista, the Albigensian Crusade and the Northern Crusades. It was during the Northern Crusades that a rather horrific episode in Lithuanian history occurred – the mass suicide at Pilenai, which is the largest known mass suicide in history. The hill fort bearing Margiris name in Punia, one of the many suggested locations of Pilėnai. The Northern Crusades (also known as the Baltic Crusades) were carried out between the 11th to the 15th centuries. By the 13th century, the crusaders in the Holy Land were losing ground to the Muslims, and the German Teutonic Order decided to bring the crusades back to their homes in Northern Europe, where there was still a significant pagan population. References By Ḏḥwty

Centralia, Pennsylvania All properties in the borough were claimed under eminent domain and therein condemned by the Commonwealth of Pennsylvania in 1992 and Centralia's ZIP code was revoked by the Postal Service in 2002.[6] State and local officials reached an agreement with the remaining residents on October 29, 2013, allowing them to live out their lives there, after which the rights of their properties will be taken through eminent domain.[7] History[edit] Early history[edit] Many of the Native American tribes endemic to what is now Columbia County sold the land that makes up Centralia to colonial agents in 1749 for the sum of five hundred pounds. The Centralia coal deposits were largely overlooked before the construction of the Mine Run Railroad in 1854. Mining begins[edit] The first two mines in Centralia opened in 1856, the Locust Run Mine and the Coal Ridge Mine. Centralia was incorporated as a borough in 1866. Coal mining continued in Centralia until the 1960s, when most of the companies shut down.

Meet Little Foot, the 3.67 Million-Year-Old Human Ancestor One of the earliest human ancestors, Little Foot, is older than scientists originally believed. Scientists were able to determine the fossil, which was discovered in South Africa in the 1994, is around 3.67 million years old -- meaning it lived a few hundred thousand years before the famous Australopithecus skeleton named Lucy found in Ethiopia. "This new date is a reminder that there could well have been many species of Australopithecus extending over a much wider area of Africa," Ronald Clarke, a professor in South Africa who discovered the fossil, said in a statement. Using a radioisotopic dating technique, scientists analyzed 11 rock samples that surrounded the fossil to determine the approximate time when Little Foot was first buried underground. Paleontologists had previously believed the skeleton was around 3 million years old.

The Holy Roman Empire was a complex adaptive system So a few weeks ago my son and I were watching the Crash Course World History series. In it John Green mentioned Voltaire's famous statement that the Holy Roman Empire was neither holy, nor Roman, nor an empire. A few days later, I found that the phrase "Holy Roman Empire" was still bouncing around in my mind. It seemed like it was trying to tell me something. The pattern of the name, its rhythm, felt similar to something I was familiar with. After a while I realized that "Holy Roman Empire" sounds a lot like "complex adaptive system." I wondered if there might be some connection between these things, so I began to explore. Magic words of power First I read about why Voltaire said what he said. I'm no historian, but my guess is that the name makes use of what I like to call "magic words of power." So, I thought, the three words of the Holy Roman Empire might act as a sort of incantation, a way to draw power from deep sources. What we want to know Is this person dominant or submissive?

The most beautiful suicide On May 1, 1947, Evelyn McHale leapt to her death from the observation deck of the Empire State Building. Photographer Robert Wiles took a photo of McHale a few minutes after her death. The photo ran a couple of weeks later in Life magazine accompanied by the following caption: On May Day, just after leaving her fiancé, 23-year-old Evelyn McHale wrote a note. From McHale's NY Times obituary, Empire State Ends Life of Girl, 20: At 10:40 A. The serenity of McHale's body amidst the crumpled wreckage it caused is astounding. Update: Here's a better photo of Warhol's print. Update: Here's the page as it appeared in Life Magazine. Update: Codex 99 did some research on McHale and her activities on the day she died.

Stonewall riots The Stonewall Inn, taken September 1969. The sign in the window reads: "We homosexuals plead with our people to please help maintain peaceful and quiet conduct on the streets of the Village—Mattachine."[1] The Stonewall riots were a series of spontaneous, violent demonstrations by members of the gay (LGBT) community[note 1] against a police raid that took place in the early morning hours of June 28, 1969, at the Stonewall Inn, located in the Greenwich Village neighborhood of Manhattan, New York City. Very few establishments welcomed openly gay people in the 1950s and 1960s. After the Stonewall riots, gays and lesbians in New York City faced gender, race, class, and generational obstacles to becoming a cohesive community. Background[edit] Homosexuality in 20th-century United States[edit] Throughout the 1950s and 1960s, the Federal Bureau of Investigation (FBI) and police departments kept lists of known homosexuals, their favored establishments, and friends; the U.S. Greenwich Village[edit]

Wandering Jupiter accounts for our unusual solar system Long before Mercury, Venus, Earth, and Mars formed, it seems that the inner solar system may have harbored a number of super-Earths—planets larger than Earth but smaller than Neptune. If so, those planets are long gone—broken up and fallen into the sun billions of years ago largely due to a great inward-and-then-outward journey that Jupiter made early in the solar system's history. This possible scenario has been suggested by Konstantin Batygin, a Caltech planetary scientist, and Gregory Laughlin of UC Santa Cruz in a paper that appears the week of March 23 in the online edition of the Proceedings of the National Academy of Sciences (PNAS). "Our work suggests that Jupiter's inward-outward migration could have destroyed a first generation of planets and set the stage for the formation of the mass-depleted terrestrial planets that our solar system has today," says Batygin, an assistant professor of planetary science. But what about the inner edge?