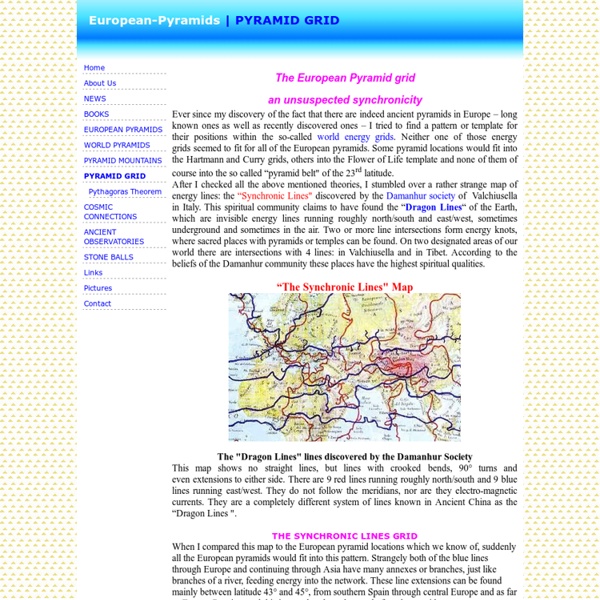 The European Pyramid grid an unsuspected synchronicity Ever since my discovery of the fact that there are indeed ancient pyramids in Europe – long known ones as well as recently discovered ones – I tried to find a pattern or template for their positions within the so-called world energy grids. Neither one of those energy grids seemed to fit for all of the European pyramids. After I checked all the above mentioned theories, I stumbled over a rather strange map of energy lines: the “Synchronic Lines" discovered by the Damanhur society of Valchiusella in Italy. “The Synchronic Lines" Map The "Dragon Lines" lines discovered by the Damanhur Society This map shows no straight lines, but lines with crooked bends, 90° turns and even extensions to either side. When I compared this map to the European pyramid locations which we know of, suddenly all the European pyramids would fit into this pattern. Coincidence - Synchronicity Related:  Ley Lines and Earth Energy

Ley Lines, Neolithic Structures and Magnets. I would like to begin this post by saying that I have not come to any conclusions and about this topic. Rather I am merely presenting a series of thoughts, based on recent research I have been doing. Some of the things here have been discussed on ats in detail before. I have been utterly baffled about this subject, I have been having dreams about it most nights and I awoke a few minutes ago with the absolute need to spew out some of these thoughts on Ley Lines. One note is that I am in no way a physics or science major. For centuries neolithic structures around the world have baffled scientists. Did the Egyptians. Is THIS the secret knowledge apparently passed down from the gods? Is THIS the reason that these structures still baffle us? I personally believe that if this is the case, many questions must follow. First off i want to look at a place called Rock Gate in Florida, built around 1929. www.scribd.com... Then, we also have the case of the Acoustic Levitation of stones in Tibet.

Ley Lines: A Definition "It defies conventional scientific explanation today and like you said Kat, science has to seriously examine This Most Ancient of Mysteries. Their is nothing More Ancient than the evidence of Leys Lines on this earth and the Most Misunderstond and the Least Educated about Them! Its a phenomena in itself how many people are not even aware of the words "Ley Line"? *DDn***" DDn - I think the leys are probably already being studied by science today. There are countless archeological texts that absolutely suggest that whatever this technology was, "the gods" of antiquity, the Anunnaki, were the ones who ultimately gained access to the Pyramid-ley technology, and used it for their own advantage to manipulate, control and even kill mass populations of people. From what can be gleaned from various ancient texts, the Anunnaki gods, the Vedic Aryans, began using their system of technology to attack the populations in the Near and Middle East.

What is a ley line Earth's Grid System, Becker-Hagens, Ley Lines, Hartmann Net, Curry Lines - Science and Pseudoscience Earth's Grid Systems Science and Pseudoscience Topography, is the study of Earth's surface shape and features or those of planets, moons, and asteroids. It is also the description of such surface shapes and features (especially their depiction in maps). Planetary Energetic Grid Theory Planetary Energetic Grid Theory falls under the heading of pseudoscience. Plato recognized grids and their patterns, devising a theory that the Earth's basic structure evolved from a simple geometric shapes to more complex ones. Becker-Hagens Grid Bill Becker and Bethe Hagens discussed the code of the Platonic Solids' positions on Earth, ascribing this discovery to the work of Ivan P. Becker and Hagens' attention was drawn to this research through the work of Chris Bird, who punished "Planetary Grid" in the New Age Journal in May 1975. South America's grid triangle forms the continent around itself. We see Dr. According to Dr. In picture number 1, we have our straight grid map of China for comparison.

10 Vile Vortices Around The World from DeepInfo Website Figure 1: Vile Vortices Overview - from Ivan Sanderson's 1972 article in Saga magazine, "The Twelve Devil’s Graveyards Around the World" plotted ship and plane disappearances worldwide, focusing attention on 12 areas. Is the earth a gigantic crystal that resonates at 7 Hz with harmonic focal points at specific equidistant points? One of the best summaries is "Anti-Gravity and the World Grid" by David Childress. The Bermuda Triangle & Japan's Devil's Sea are considered anomalies, where unexplained phenomena occur, such as disappearing ships & planes, & radios & compasses that stop working. Why are ancient Megaliths placed at specific equidistant points, such as Mohenjo-Daro, Cairo, Peru, Easter Island, Zimbabwe, and Borneo, to name a few. If the Earth is mapped out as a icosahedron (or dodecahedron) Grid, these are all equidistant geometric points (Vortices) of intersecting (Ley) lines. List of Numbered Places Numbered List of Vortices on World Grid Map from Becker-Hagens

Ley-lines There are several developed theories on the purpose of ley-lines, many of which offer valid potential; something which in itself illustrates the complexity of unravelling the myriad of alignments from several millennia of activity. It is likely that ley-lines are a product of different elements from several of the following theories, being created at different times, for different purposes. The following examples are the current contenders for explaining how such a dedication to straight-lines has led mankind its present position. It is important to recognise the distinction between ley-lines and geometric alignments. Spirit ways and Death roads - (Funerary paths): Although there is little direct evidence for 'religious' worship in the modern sense of the word at megalithic sites, there is certainly evidence that funerary rites were involved at several important locations (some of which may be classed a secondary use). Feng shui - (Earths Magnetic Field) Astronomical Alignments: The St.

Ley line Ley lines /leɪ laɪnz/ are supposed alignments of numerous places of geographical and historical interest, such as ancient monuments and megaliths, natural ridge-tops and water-fords. The phrase was coined in 1921 by the amateur archaeologist Alfred Watkins, in his books Early British Trackways and The Old Straight Track. He sought to identify ancient trackways in the British landscape. Watkins later developed theories that these alignments were created for ease of overland trekking by line-of-sight navigation during neolithic times, and had persisted in the landscape over millennia.[1] Since the publication of Michell's book, the spiritualised version of the concept has been adopted by other authors and applied to landscapes in many places around the world. Both versions of the theory have been criticised on the grounds that a random distribution of a sufficient number of points will inevitably create "alignments". Alfred Watkins and The Old Straight Track[edit] His work referred to G.

Earth Chakras, Sacred Sites, and their locations Where are the Earth Chakras? At the foundation of earth chakra work is the pattern of the seven chakras. Begin your work with these seven, which are best defined by their geometrical centres. Learn to accurately draw the full circles of these chakras on world maps. After you are familiar with this foundation system, then there are other dependent structures to investigate. Learn the foundations first, and then build upon them. Chakra One: Mt. Mt. Shasta is the most primal of the earth chakras. When working with the forces of Mt. Chakra Two: Lake Titicaca On the Island of the Sun, in Lake Titicaca, is found the Titicaca Stone, which is the geometrical centre for the second earth chakra. From Titicaca is born what is truly New. The undifferentiated life force of Chakra One, Mt. If you construct this second world chakra on a map, let the circumference pass through the junction of the Napo and Maranon rivers, near Iquitos, Peru, where the Amazon River begins. Chakra Five: Great Pyramid, Mt.

Making Peace with Earth Energies, Cosmic Forces & More - Senzar Learning Center in Sedona AZ Increased solar flare activity, geopathic energies, EMFs and more are putting a huge strain on plants, animals and people who are unable to harmonize to these frequencies or balance environmental conditions appropriately. Symptoms can include: restless sleep muscle aches nausea headaches memory loss irritability exhaustion depression, and more. In this workshop you will learn how to balance the most common geopathic and EMF situations that occur in living environments today, including: Electromagnetic pollution from cell phones, radio waves, and electronic equipment. Geopathic zones from earth fractures and underground water. You will also learn how to boost your body's resistance to these disturbances and how to harmonize yourself with your fiercest "energetic enemies" so you can co-exist in peace. Basic dowsing skills are required for this course, You must be able to achieve a “yes” and “no” response with a pendulum, other dowsing device, or through muscle testing.

The World Grid, Earth Energies & Geomantic Sites of Power Search this site The Holy Land of Scotland: Jesus in Scotland and the Gospel of the Grail Mysteries of Chartres Cathedral Rosa Templum: The enigmatic arcanum of Rosslyn Chapel and the Bride of Christ Monarch of antiquity: The sacred yew in Fortingall, central Scotland, reputedly the oldest tree in Europe The World Grid, Earth Energies and Geomantic Sites of Power (Extracted from The Holy Land of Scotland: Jesus in Scotland & the Gospel of the Grail by Barry Dunford) Curiously, rather than avoid pre-Christian, so-called ‘pagan’ sites, the early Celtic Culdee monks often seemed to specifically overlay these ancient sites of worship with their own spiritual focus and presence. Why? Could it be there was a synthesis of natural elements focussed into these apparent pagan vortices which the celtic monks believed would act as a charge to supplement and reinforce their own spiritual practices. In this connection, the Rev. The Rev. Dr.

The Life Force of Sacred Sites : Shirley MacLaine Earth energy. It can't be seen or tasted and it doesn't have an odor. But, the effects of Earth energy can be experienced in all of those ways. It isn't loud, but it can be heard. It can't be touched, but it can definitely be felt. Our ancestors knew that ley lines, earth grids and vortexes were energy sources and centers that were to be considered holy. Today, in this fast-paced, technology-oriented, loud 21st Century, science refers to these sacred energy centers as geophysical anomalies. The oddity about using science and technology to determine what happens at these energy centers is that the technology to make this determination already exists within each and every individual. The power and strength of a ley line, earth grid or vortex can only be determined on an individualistic basis by the physical body utilizing the spirit as the conductor and the mind as the translator. Ley Lines Rhythms of energy. So it was on the Camino Vortex Energy Vortex.

Earth Chakras And Vortices - The Earth Energy Grid Looking at Nature all around us, we cannot help but marvel at its raw beauty and rhythm. Planet Earth is a conscious and vibrant living entity. With its own free will, it is meticulously orchestrating a symphony of equilibrium and constant evolution, communicating with all its inhabitants, the solar system and the universe. Ancient civilizations revered their host as a sacred entity: they believed her to be their “Great Mother” and often built their megalithic sacred monuments in areas they considered “Earth’s Highest Energy Vortexes” or “Earth Chakras”. Structures like Stonehenge, the Pyramids of Egypt and Mayan, Aztec, and Incan monuments along with many temples, churches and pilgrimage sites are now considered powerful energetic spots. Location of the Earth’s Seven Major Chakras Ancient civilizations and modern esoteric traditions believe that the body of our physical blue planet materialized from a universal energy matrix and has a subtle structure, similar to the human energy field.