Indoctrinating Our Youth in Earth Worship 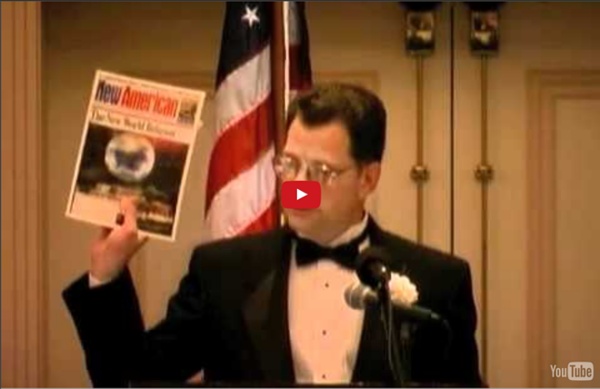 World Population Clock: 7 Billion People World Population: Past, Present, and Future (move and expand the bar at the bottom of the chart to navigate through time) The chart above illustrates how world population has changed throughout history. At the dawn of agriculture, about 8000 B.C., the population of the world was approximately 5 million. A tremendous change occurred with the industrial revolution: whereas it had taken all of human history until around 1800 for world population to reach one billion, the second billion was achieved in only 130 years (1930), the third billion in 30 years (1960), the fourth billion in 15 years (1974), and the fifth billion in only 13 years (1987). During the 20th century alone, the population in the world has grown from 1.65 billion to 6 billion. Wonder how big was the world's population when you were born? Growth Rate Yearly Growth Rate (%) Population in the world is currently (2018-2019) growing at a rate of around 1.07% per year (down from 1.09% in 2018, 1.12% in 2017 and 1.14% in 2016).

Pesticide Exposure Found to Lower Intelligence Pesticides, ubiquitous among not only the food supply but farms and homes worldwide, have been found to be creating lasting changes in overall brain structure — changes that have been linked to lower intelligence levels and decreased cognitive function. Previously linked in scientific research to the massive obesity crisis, pesticides are now known to impact the mind in ways that are still not entirely understood. Despite these findings, they are continually touted as safe by the profit-hungry chemical industry. The study, published in the Proceedings of the National Academy of Sciences, observed pregnant mothers in New York who were exposed to a pesticide known as chlorpyrifos (CPF). Perhaps the most startling finding by the academic team is that all of the women in the study, of which there were 369 total, were actually below the US established thresholds of acute exposure. Lead researcher Virginia Rauh, a professor at the Mailman School of Public Health, summarized the findings:

Jason Silva The Convention on Biological Diversity The Convention on Biological Diversity (CBD) is the first global agreement to cover all aspects of biological diversity including genetic resources, species and ecosystems. It is also the first to recognize that the conservation of biological diversity is ‘a common concern of humankind’ and an integral part of sustainable development. Because of this worldwide concern, over 150 countries, including the UK, signed the Convention on Biological Diversity at Rio de Janeiro, South America in 1992. The CBD has three main objectives: the conservation of biodiversity;the sustainable use of biodiversity; andthe sharing of benefits from the use of genetic resources (including by appropriate access to these resources). How is the CBD implemented? Decision making for the CBD is by the Conference of the Parties (COP), which currently meets biennially to review progress in the implementation of the Convention and to decide on work programmes to achieve its objectives. 2010 Biodiversity Target (Defra).

» Nanny Bloomberg Strikes Again: Outlaws Painkillers Alex Jones Kurt Nimmo Infowars.com January 11, 2012 Guns and large soda drinks are just the beginning. New York mayor Michael Bloomberg has once again extended the reach of the state, this time outlawing the use of painkillers. Mayor Bloomberg will decide how much pain is tolerable for citizens. The edict from on-high restricts or eliminates the use of the most common painkillers in New York City’s public hospitals. “Abuse of prescription painkillers in our city has increased alarmingly,” Bloomberg said from a lectern at Elmhurst Hospital Center, a public hospital in Queens. According to the New York Times, public hospital patients will be limited to three days’ worth of drugs such as Vicodin and Percocet. Despite the fact Bloomberg and his commissars lack the regulatory authority to impose the new guidelines on private hospitals, several said they would voluntarily adopt the “legislative medicine” measure. This article was posted: Friday, January 11, 2013 at 9:45 am Print this page. BUSTED! Breaking!

Eugenics, Racism and Population Control by Lien of Oz For over 200 years, an ‘elite’ core of powerful ‘global’ leaders and grossly affluent individuals and foundations, have promulgated the fear of over-population. They have persisted with devious schemes to control the earth’s population. Historically this onslaught finds its starting pointing in the essay –"Principle of Population" written in 1798 by Thomas Malthus. His thesis was that human population growth would outpace the earth’s capacity to feed the growing mass of humanity. This eugenic ideal was later advanced by Margaret Sanger, founder of the American Birth Control League and later, in 1934, Planned Parenthood. An even greater pursuit for eugenic ideals might be levelled at the door of the Rockefellers; who in the 1930’s funded the Kaiser Wilhelm Institute in Germany which directed the infamous eugenic schemes of the Third Reich [ & Adolf Hitler]. German eugenic practices, seemingly an embarrassment, actually continued unabated amongst the political ‘elite’.

Geometry of Thinking for Sustainable Global Governance 24th October 2009 | Draft Cognitive Implication of Synergetics Produced in relation to The Buckminster Fuller Challenge 2010, organized by The Buckminster Fuller Institute, in support of the development and implementation of a strategy that has significant potential to solve humanity's most pressing problems. IntroductionSystems as polyhedraChallenge to comprehension"Uprightness" and global geometryMatrix representation of psychological types and their styles of categorizationEpistemological "body odour"Self-reflexivity in global modellingIntegrating disagreement and dissentRequisite variety of perspectivesSelf-reflexivity through a "shadowy" dualKeys to global governance "embedded" in synergetics as a meta-modelImplications for a "meta-model"Cognitive engagement with globalityChallenge of cognitive geometryExistential and experiential engagement with globalityGeometry as a metaphorical magic mirror of thinkingThe secret within "Bucky's Ball"? Introduction Systems as polyhedra

Chris Mooney: Inside The Republican Brain and Climate Denialism | Sea Change Radio April 17th, 2012 Posted by Alex Wise Podcast: Play in new window | Download If you’re listening to this show, chances are you believe that climate change is real, that it’s a problem, and that human actions have brought us to where we are today. Some Sea Change Radio listeners are Democrats, some are Republicans, and a large number may not identify with either party – but all are probably pretty concerned about responsible environmental stewardship, irrespective of their specific political party affiliation. If you found this post interesting, you might want to explore these topics also: alex wise, chris mooney, Climate Change, republicans, sea change radio

Electronic Information System for International Law - Home Earth Charter Youth Group Wiki - home International Cooperative Biodiversity Group International Cooperative Biodiversity Groups (or ICBG) is a program under National Institute of Health, National Science Foundation and USAID established in 1993 to promote collaborative research between American universities and research institutions in countries that harbor unique genetic resource in the form of biodiversity - the practice known as bioprospecting. The basic aim of the program is to benefit both the host community and the global scientific community by discovering and researching the possibilities for new solutions to human health problems based on previously unexplored genetic resources. It therefore seeks to conserve biodiversity, and to foment, encourage and support sustainable practices of usage of biological resources. Groups are headed by a principal investigator who coordinates the efforts of the research consortium which often has branches in the US and the host country as well as in the countries of other third party institutions.